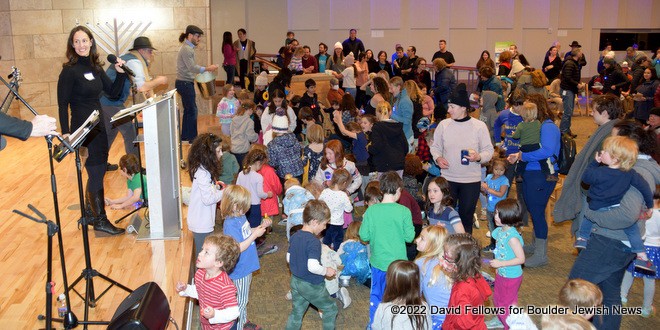 Governor Jared Polis addressed the crowd, Ira Greschler lit a menorah, latkes and sufganyot were served, and gelt was “dropped” — all of the elements of this year’s Grand Menorah Lighting in Boulder were present — except the Grand Menorah, the Courthouse Lawn on the Pearl Street Mall, and cold, outdoor weather.

Starting at about 2:00 pm Monday afternoon, Boulder County Sheriff’s and fire units responded to a fire in Sunshine Canyon, west of Boulder’s downtown area. Evacuation orders were issued west of Broadway St. mid afternoon, as the fire expanded under high winds. The Boulder JCC and Boulder County Center for Judaism, organizers of the annual Pearl St. Menorah Lighting event, decided to shift the event to the Boulder JCC to be on the safe side. (As of this writing, the fire is reportedly only 25% contained.)

Aside from re-convening on the other side of town from the evacuation zone, another advantage to the new location became immediately clear — for the first time in memory, the Menorah Lighting took place indoors, in Levin Hall — and everyone was warm and dry!

Steve Brodsky entertained while latkes, sufganyot, and hot chocolate was served from tables arrayed around the edges of the hall. Special Chanukah gloves were distributed to those who registered for the event, but there was no need to use them during the event!

Here are more pictures from the event, along with a link to the full gallery:

I've been writing things since grammar school, and served as a writer, photographer and/or an editor on my junior high and high school newspapers; the Daily Trojan at USC (where I earned my journalism degree); the student newspaper at the Anderson School at UCLA (where I earned my MBA); and written and edited countless business documents and presentations in the ensuing twenty years. I've been involved Jewishly since my bris and in Boulder since 1995. I'm married to my Executive Director Cheryl, and we have two children, Lauren and Ethan.
Previous 4 Chanukah Questions with Governor Jared Polis
Next Chanukah on Ice Rescheduled to Tuesday Night