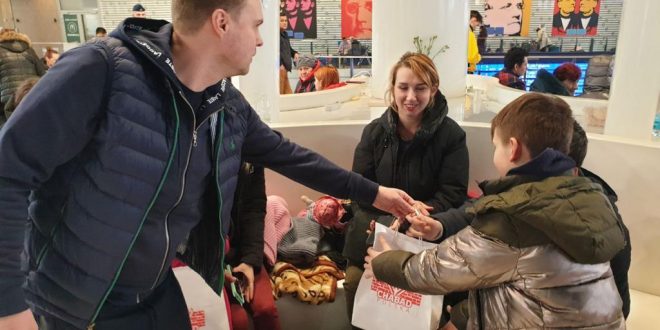 With thousands of Ukrainian Jews displaced from their homes and Pesach just two days away, some intrepid individuals are taking action to ensure that they can celebrate the Festival of Redemption with sentiments of joy and freedom.

The last weeks have seen an influx of Ukrainian refugees into Poland and, specifically, its capital Warsaw. Warsaw’s relatively close proximity to the border coupled with the heartwarming welcome that residents have been offering the refugees has turned it into one of the most desirable destinations for many a beleaguered refugee.

Lana, 34, fled her native Lvov two weeks ago with her 8-year-old son Gregory. She’s still struggling to cope with the challenges of adjusting to a new home and life lacking so many fundamentals, and most significantly, her spouse.

“I ran away from Lvov together with my son, and although I’m glad that we’re on the other side of the border and not in immediate physical danger, I’m terrified for the fate of my husband who’s somewhere out there on the battlefield and unable to maintain regular contact.”

The Chabad House in Warsaw has transformed into a haven for thousands of Jewish Ukrainian refugees. Directors Rabbi Shalom and Dina Stambler rented out several hotel complexes and are working round-the-clock to provide accommodations, food and translation along with other urgent services for the refugees. And in just two days, the ballroom of one of these hotels will be used by the Stamblers to host a massive Pesach seder for 250 guests.

“When the war started, and we realized what was going on, we decided to arrange food and housing for all Jewish refugees. We keep hearing heartbreaking accounts from the battlefield. There are refugees arriving here physically injured, ill or newly bereaved after losing a loved one in action or as a victim to the shelling. Most have never even stepped foot in Warsaw. We feel that it’s our moral obligation to help them, and we make it our business to try,” shares Rabbi Shalom Stambler.

The Pesach seder that they’re in the midst of arranging is their biggest undertaking yet, requiring tremendous logistics to arrange to host, feed and cater the proceedings to 250 Jewish men, women and children of all walks of life and all levels of observance.

One of the families that will be joining the Stamblers’ seder are Yosef and Miriam Sufran and their three children, ages 4, 2, and…a baby boy only 3 weeks old.

Miriam Sufran was one among tens of thousands of refugees fleeing ravaged Kiev to safety in Poland, yet one primary difference was that she was in her ninth month and traveling alone with two small children. The journey for Miriam was not only arduous, and physically and emotionally taxing due to her delicate condition, but also nerve-wracking as there was no telling if and when she would go into labor.

Fearing for Miriam’s life and the lives of their two small children, the Sufrans made the heartrending decision that so many had made before them to split up the family, with Miriam crossing the border into Poland with the children, and Yosef, who is of draft age and prohibited to leave the country, remaining behind.

The only complication was that Miriam was due any day, and there was no telling if and when she’d go into labor along the way.

Dina Stambler, Chabad emissary in Warsaw, shares: “I met Miriam for the first time at a Purim party in a hotel that we rented out for the refugees. We’d already spoken on the phone beforehand, but when we met, I couldn’t get over the faith and calm that she exuded. She was in her ninth month, alone with two small children and facing the unknown; yet she was completely in control and ready to face the challenges head on. Even in the midst of the terror and craziness of war and her spontaneous escape, she held herself together and even remembered to pack her medical reports and several outfits for her unborn baby…”

Several days before the birth, Stambler escorted Sufran for medical tests, in the course of which the doctor revealed that she had developed a complication and recommended immediate hospitalization and induction.  Alone in a foreign country, Miriam panicked and determined to wait rather than proceed with the induction.

“I was a nervous wreck,” admits Dina Stambler. “On one hand, I couldn’t presage her enough that it was dangerous to disregard the doctor’s explicit warnings, yet on the other hand, I knew that it was her decision and her decision only.

“When I awoke the next morning, I received a text. ‘I decided to go to the hospital’ with no further explanation. I was surprised because she’d been so adamant about giving birth naturally, and at the same time, inordinately relieved. Only later did I understand what prompted her change of heart:  With her husband stuck in Ukraine, Miriam had been alone in Warsaw, yet he miraculously obtained a permit to leave on the grounds that his wife was on the verge of giving birth to their third child.  With her husband finally at her side, Miriam’s perspective changed, and she was able to think clearly, wisely and responsibly. Thank G-d, we were all delighted to hear that Miriam delivered a healthy baby boy yesterday.”

The happy ending doesn’t end there. The morning after the birth, an Israeli clerk employed in the Israeli Embassy in Warsaw contacted the Stamblers to ask what she could personally do to help the refugees. Without thinking twice, Dina Stambler recommended that she sponsor a new baby stroller for the infant. Several hours later, the clerk called Stambler to say that the carriage was ready.

Since Miriam’s arrival with the two little ones in Warsaw, the local Jewish community has gone above and beyond to take the family under its wing, providing the Sufrans, alongside thousands of fellow Jewish refugees, with comfortable accommodations and daily hot meals.

In a special visit to Warsaw to express Israel’s solidarity with Ukrainian Jewish refugees, Israeli MK and Minister of Immigrant Absorption Penina Tamanu-Shata visited the Chabad House and observed the mind-boggling operation in awe.  Born in Wuzaba, a village located in northern Ethiopia, Tamanu-Shata is no stranger to upheaval. When she was a young girl, her family immigrated to Israel during Operation Moses, when Ethiopian Jews were evacuated from their native land. She, her five brothers, and her father were among almost 7,000 Ethiopian Jews airlifted out of the country by the Mossad to Israel, and her mother followed several years later.

On behalf of the Israeli government, Tamanu-Shata publicly thanked the Stamblers for their noble efforts on behalf of the refugees. “Jewish Rabbis are the primary and natural address for the immigrants. You fill, both in this time and in regular times, a very important leadership role within the Jewish nation, and every person that you care for is another life saved.

In response, Rabbi Shalom Stanbler, Rav of Chabad-Poland, expressed: “We take great pleasure and pride in this opportunity to assist the refuges, and I’m personally committed to any case that involves saving lives.”

Tamanu-Shata concluded, “‘Anyone who saves even a single soul in Yisrael is as one who upheld the entire world.’ We are now just several days prior to the holiday of Passover, and it is our collective hope that, with the help of G-d, the exodus of Ukrainian Jews shall be the final exodus from war.”

They call me "NewsHound IV," because I'm a clever Finnegan, sniffing out stories all over the Boulder area. I love Jewish holidays because the food is GREAT, especially the brisket. Well all the food. I was a rescue pup and glad to be on the scent!
Previous Column: Terror Spree in Israel May Even Extend To New Jersey
Next Jewish Philanthropists Catch the Spirit in Uplifting Mission to Israel