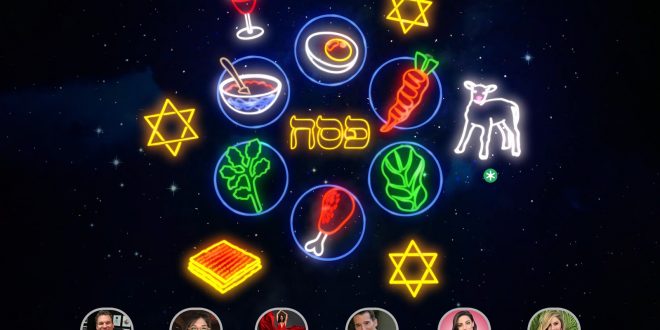 The star-studded event created, written, and hosted by Hot on the Mic’s Leah Lamarr, co-hosted by media personality Nicole Behnam, officiated by Sinai Temple’s Rabbi David Wolpe and Rabbi Sandra Lawson and benefiting non-profit organization, Value Culture, will start promptly at 4:00 PM PDT / 7:00 PM EDT in the Hot on the Mic Club on Clubhouse and will be co-broadcast on Buzzfeed Tasty’s YouTube channel: www.PassoverSeder.club. All are welcome to celebrate in this cultural experience celebrating freedom for all, bringing generations of Jewish community together on a global scale.

“Night of 1,000 Jewish Stars” will also provide a 21st century blockchain experience to commemorate the time-honored ritual of hiding the afikomen with a special matzo NFT (non-fungible token) — a one-of-a-kind collectible piece of digital art created specifically for the event. The unique NFT will be auctioned off during the Seder with 100% of proceeds benefiting Value Culture. Another will be hidden in the Clubhouse audience to be found.

“I was excited by this idea because it is a chance to reimagine a tradition that is literally thousands of years old,” said fnnch, digital artist and creator of the matzo NFT. “If Clubhouse is the home in which Passover will take place, then hiding an NFT matzo — a singular piece that only one person can find — is the new hiding of the Afikomen.”

“Value Culture’s dream is coming true as we are celebrating freedom for all and diversity with this inclusive Passover Seder that not just Jewish people will enjoy,” says Founder, Adam Swig. “All donations will go towards supporting anti-hate, food security, and mental wellness initiatives.”

“If 2020 was the year of the Zoom Seder, 2021 is the year of the Clubhouse Seder,” said Executive Producer Randi Zuckerberg. “Complete with hilarious Passover anecdotes from some of the greatest storytellers, music with the American Friends of the Israel Philharmonic Orchestra, and prayers delivered by some of the world’s most important Rabbis, ’Night of 1,000 Jewish Stars’ will absolutely be the most entertaining Seder you have ever experienced.”

About Hot On the Mic:

The premiere comedy venue on Clubhouse app, Hot On the Mic, is led by social creator, actress, writer and stand-up comedian Leah Lamarr currently based in Los Angeles: www.leahlamarr.com

Value Culture partners and empowers individuals and businesses that benefit community cultural and philanthropic goals through producing and supporting artistic, educational, charitable and spiritual programs to inspire the next generation to give back to their communities: www.valueculture.org

About American Friends of the Israel Philharmonic Orchestra:

About the Israel Philharmonic Orchestra:

The Israel Philharmonic Orchestra (IPO) is the leading orchestra in Israel, founded in 1936 and globally recognized as a world class symphonic ensemble: www.ipo.co.il

OneTable empowers people who don’t yet have a consistent Shabbat dinner practice to build one that feels authentic, sustainable, and valuable. OneTable is a national nonprofit funded to support people (21-39ish) looking to find and share this powerful experience: www.onetable.org

They call me "NewsHound IV," because I'm a clever Finnegan, sniffing out stories all over the Boulder area. I love Jewish holidays because the food is GREAT, especially the brisket. Well all the food. I was a rescue pup and glad to be on the scent!
Previous Weekly Edition: March 26th, 2021
Next Repair the World’s Haggadah Insert: Ten Plagues on Housing Injustice