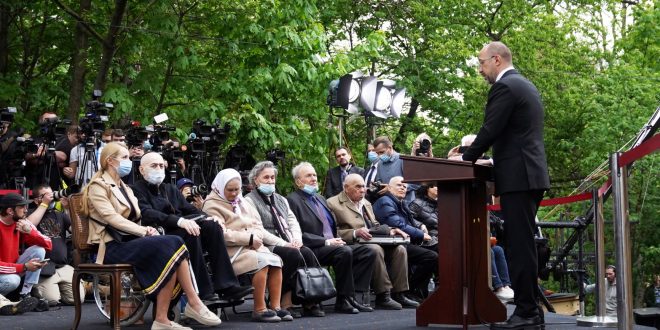 Staff May 18, 2021 News Comments Off on PM of Ukraine Honors Ukrainians Who Saved Jews During Holocaust at New Babyn Yar Synagogue

Award announced of a lifelong financial stipend for the 18 surviving Ukrainians classified as “Righteous Among the Nations.”

14 May (Kyiv) – At a ceremony hosted by the Babyn Yar Holocaust Memorial Center (BYHMC), Ukraine’s Prime Minister Denys Shmygal, the Head of the Presidential Office of Ukraine Andrii Yermak and Ukraine’s Minister of Culture and Information Policy Oleksandr Tkachenko honored Ukrainians who saved Jews during the Holocaust and announced that those still alive will receive a lifelong monthly state stipend, in recognition of their heroism.

The ceremony marked the first Remembrance Day for Ukrainians who rescued Jews during World War II. Earlier this year, Ukraine’s parliament passed a resolution designating 14 May as an annual commemoration to honor their actions.

Following World War II, a total of 2,659 Ukrainians were awarded the prestigious title of “Righteous Among the Nations” by Yad Vashem, Israel’s official memorial to the victims of the Holocaust. Of all countries, Ukraine has the fourth largest number of “Righteous Among the Nations.” However, it is believed that a far greater number of Ukrainians risked their lives and those of their families to save Jews from the Nazis. BYHMC is working to uncover many of these unknown stories.

At today’s ceremony, it was announced that the 18 Ukrainian “Righteous Among the Nations” who remain alive today, will each be recognized by the state for their bravery with a monthly state stipend for the remainder of their lives. The ceremony was attended by two of the “Righteous Among the Nations,” Vasyl Nazarenko and Oksana Antypchuk (See details of their personal stories in Editor’s Notes), plus the children of three others, Olena Malova-Zavadska, Lidia Savchuk and Nadia Laznyuk.

Prime Minister of Ukraine Denys Shmygal said, “This landmark event is a clear indication that the Ukrainian public consciousness affirms high ideals of respect for human life and recognition of responsibility and memory, which contribute to the construction of a free, democratic society…On the Day of Remembrance of Ukrainians who saved Jews during the Second World War, we honor the feat of these courageous people who have become and remain for us an example of humanity and self-sacrifice.”

Head of the Presidential Office of Ukraine Andrii Yermak commented, “Babyn Yar became a terrible symbol of the Holocaust in Eastern Europe because of the massacre of World War II. In just two days, almost 34,000 Jews from Kyiv were killed. Today, it is important to honor the memory of these people and praise those who saved them at the risk of their own lives. Express gratitude for the hope they have given back to the world. And I hope that future generations will remember this feat for centuries.”

Minister of Culture and Information Policy of Ukraine Oleksandr Tkachenko emphasized the importance to “honor the memory of tens of thousands of Jews from Kyiv who died in Babyn Yar during the terrible Holocaust,” adding “it is very symbolic that we are doing this on the Day of Remembrance of Ukrainians who risked their lives to save Jews. Today we also honor the feat of all these courageous people.”

Today’s ceremony took place at the new symbolic synagogue at Babyn Yar and was attended by state officials, diplomats, religious leaders, cultural and community figures. They included Metropolitan Epiphanius (Primate of the Orthodox Church of Ukraine and Metropolitan of Kyiv and All Ukraine), Sviatoslav Shevchuk (Head of the Ukrainian Greek Catholic Church) Rabbi Moshe Reuven Azman (Chief Rabbi of Kyiv and Ukraine – All-Ukrainian Jewish Congress), Father Patrick Desbois (Founder and president of Yahad-In Unum, Chief Strategist and Head of the Academic Council at BYHMC) and Manuel Herz (Professor at University of Basel, designer of the symbolic synagogue at Babyn Yar).

The symbolic synagogue, which was opened last month on Holocaust Memorial Day in the Jewish world, is located next to Babyn Yar’s menorah monument. The design of the symbolic synagogue takes its inspiration from the pop-up book and from 17th and 18th century wooden Ukrainian synagogues. When closed, the building is a flat structure that is manually opened, and then unfolds into the three-dimensional space of the synagogue structure. The imaginative, one-of-a-kind design also features an interior which references two destroyed 17th and 18th century Ukrainian synagogues.

The symbolic synagogue is the first construction to be completed in the planned Babyn Yar memorial complex, which will stretch over an area of 150 hectares, making it one of the world’s largest Holocaust memorial centers. A dozen buildings will eventually be erected as part of the complex.

Synagogue designer, architect Manuel Herz said, “More people were killed at Babyn Yar than in any single massacre during the Holocaust. The answer to this terrible crime could be gloomy and minimalistic architecture traditional for Holocaust memorials. However, I am convinced that the monumental and static approach contradicts the tens of thousands of individual voices of the victims of Babyn Yar. So, the idea was born to create a performative architecture that transforms, surprises and gives a sense of awe. The Babyn Yar Synagogue should bring people together for a collective memorial ritual.”

33,771 Jewish victims were shot at Babyn Yar by the Nazis during just two days, 29 and 30 September 1941. Tens of thousands of Ukrainians, Roma, mentally ill and others were shot thereafter at Babyn Yar throughout the Nazi occupation of Kyiv. The estimated number of victims murdered at Babyn Yar is around 100,000, making it Europe’s largest mass grave. This year marks the 80th anniversary of the Babyn Yar massacre and commemorations will culminate in an international event including global leaders in September.

Chief Strategist and Head of the Academic Council at BYHMC, Father Patrick Desbois said, “Babyn Yar, a discreet ravine, where one thousand German people came to assassinate almost 34, 000 Jews, including children and women in broad daylight, in front of everybody. It is a place of mass murder, from where we have to teach the younger generation all over the planet not to engage in mass shootings, in mass crimes today. Unfortunately, until now, every day, on every continent, mass shootings are devastating the world – In Kabul, in Iraq, in Sуria and elsewhere. Babyn Yar must be an international center to prevent mass crimes.”

The following “Righteous Among the Nations” attended today’s ceremony:

Vasyl Nazarenko lived with his parents and older sisters in the village of Viitivka. During the war, they saved Ethey (Anyuta) Yadushliver and her daughter Betya from almost certain death. Ethey was a seamstress and lived in the neighboring village of Zhornyshche and in 1941 was sewing coats for the Nazarenko children. A few weeks later, they heard rumors of brutal Nazi pogroms against Jews in Zhornyshche. Anyuta asked the Nazarenko family for shelter. She later admitted that she was worried about her daughter Betya, whom the Nazis had sent to the ghetto in Nemyriv. Nazarenko’s eldest daughter Euphrosynia, who studied at a pedagogical institute in Kyiv before the war and knew a little German, went to Nemyriv with her cousin to look for Betya. The girls managed to find her at the forced paving works. After sunset, all three secretly returned to Viitovka. The Nazarenko family hid Ethey Yadushliver and her daughter Betya for almost two and a half years, in their attic, cellar and barn. When raids were conducted in the village, they lived in a haystack in a field for several weeks, where 10-year-old Vasyl brought them water and food and told them about the situation in the village. When the danger passed, Anyuta and Betya returned to the house and lived there until their liberation from occupation in March 1944. On January 2, 1995, the Nazarenkos and their children were recognized as Righteous Among the Nations.

During World War II, Oksana’s family lived in the village of Uzhachyn in the Novohrad-Volynsk District. In July 1941, with the arrival of the Nazis in the village, the persecution of local Jews began. They were first sent to the ghetto in Novograd-Volynsk, but after a few weeks their execution began. On September 20, 1941, 3,200 Jewish residents of Novograd-Volynsk and the surrounding villages were shot at a former military shooting range located at the northern outskirts of the city. Among those taken out for execution were Zina (Zlata) Keselman and her two-year-old son Naum. When the column was led to the place of execution, a policeman she knew helped the woman and her child to escape. For about a year, Oksana’s family hid Zina and Naum in their house. One day in 1942, the family was searched and Oksana hid little Naum. Following that incident, Zina Keselman hid with relatives of Oksana’s family, and Naum was adopted by them. Naum Keselman remembered Oksana’s family with gratitude throughout his life and called Oksana his second mother. Nahum Keselman died two months before Oksana and her parents Mark and Lidia Deineko, were awarded the title of Righteous Among the Nations in June 2016.

The Babyn Yar Holocaust Memorial Centre is a non-governmental charity whose purpose is to preserve and cultivate the memory of the Holocaust and the Babyn Yar tragedy in Ukraine by turning the Babyn Yar area into a place of remembrance. The Foundation’s mission is to worthily honour the memory of the victims of the tragedy and to contribute to the humanization of society through preserving and studying the history of the Holocaust. In September 2020, Ukraine’s government represented by the Minister of Culture Oleksandr Tkachenko, under the auspices of the President of Ukraine, Volodymyr Zelensky, signed a memorandum of understanding and cooperation with BYHMC, represented by Supervisory Board member Ronald S. Lauder, to promote the construction of a fitting memorial to the Babyn Yar tragedy. A series of commemorations during 2021 will mark the eightieth anniversary of the Babyn Yar tragedy.

They call me "NewsHound IV," because I'm a clever Finnegan, sniffing out stories all over the Boulder area. I love Jewish holidays because the food is GREAT, especially the brisket. Well all the food. I was a rescue pup and glad to be on the scent!
Previous The Case for Corporate Social Purpose and Community Investment
Next Hadassah Presents Virtual Tour of National Portrait Gallery