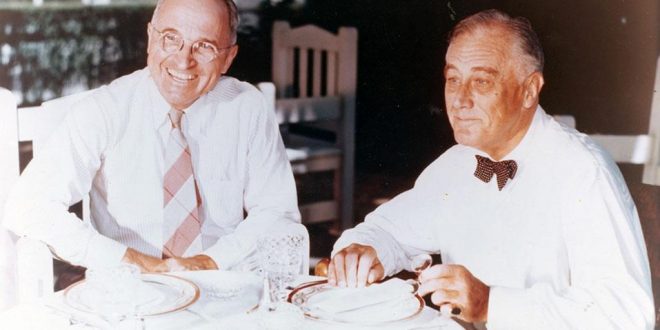 Staff October 18, 2021 Guests and Blogs Comments Off on Katie Couric Wasn’t The First: FDR, Truman And The Jews

Controversy has erupted over the admission by journalist Katie Couric that she doctored her 2016 interview with Supreme Court Justice Ruth Bader Ginsburg, in order to “protect” Ginsburg from criticism of her opposition to athletes kneeling during the national anthem.

Couric joins a growing list of authors who have altered the unflattering words of individuals whom they admire, in order to shield them from embarrassment. Presidents Franklin D. Roosevelt and Harry S. Truman have been among the prime beneficiaries of such unilateral revising of history.

One instance involving Roosevelt concerns remarks he made in a private meeting on January 22, 1938, with Rabbi Stephen S. Wise, the foremost American Jewish leader of that era. The only source for what they discussed is a memorandum that Wise dictated shortly afterwards, for his private records.

According to historians Richard Breitman and Allan J. Lichtman, in their 2013 book, FDR and the Jews, the topic of the conversation was Palestine. Roosevelt believed the country was incapable of absorbing many more Jewish immigrants, so he urged Wise to look for “some large areas [elsewhere in the world] as a second choice for the Jews.” Wise disagreed and “parried” with FDR about Palestine, Breitman and Lichtman wrote, citing Wise’s memorandum.

But Breitman and Lichtman omitted another part of the conversation, in which the president blamed Poland’s Jews for the rising antisemitism in that country. According to the full text of the Wise memo, FDR claimed that “the Jewish grain dealer and the Jewish shoe dealer and the Jewish shopkeeper” had been undercutting Polish Christian merchants, and it was this alleged Jewish financial subterfuge that was provoking Christian shopkeepers to demand that “the Jew should go.”

According to the memo, Wise protested, “But, Chief, this is pure Fascist talk”—a surprisingly blunt remark, considering that Wise was a passionate supporter of President Roosevelt and his administration. But Wise’s plea had no impact on the president. He wrote that Roosevelt’s remarks were “very painful” and “like a blow in the face.” Readers of the Breitman-Lichtman book, like readers of Katie Couric’s interview with Justice Ginsburg, had no way of knowing what had been omitted.

President Roosevelt’s image has also benefitted from another troubling omission, this one courtesy of the State Department. At the Yalta Conference, in February 1945, Roosevelt mentioned to Josef Stalin that he would soon be seeing Saudi Arabia’s king, Ibn Saud. Stalin asked if FDR intended to make any concessions to Saud. According to the transcript, “The President replied that there was only one concession he thought he might offer and that was to give him the six million Jews in the United States.”

But when the State Department published the transcript in 1955, Roosevelt’s unpleasant remark about Jews was omitted. More than fifty years later, a researcher discovered that then-Assistant Secretary of State Walter Bedell Smith had crossed out the comment about Jews prior to publication, and had written in the margin: “Delete this–it is not pertinent history.”

Censors have also lent a helping hand to FDR’s successor. In a 1945 memo, President Harry S. Truman wrote: “The Jews claim God Almighty picked ’em out for special privilege. Well I’m sure he had better judgement. Fact is I never thought God picked any favorites. It is my studied opinion that any race, creed or color can be God’s favorites if they act the part–and very few of ‘em do that.”

The most unflattering words in that passage ended up on the cutting-room floor. Journalist William Hillman was hired to assist Truman in preparing his memoirs and other papers for publication. The first volume, Mr. President, appeared in 1953.  It included the 1945 memorandum, but the wording was changed to read: “I never thought God picked any favorites. It is my studied opinion that any race, creed or color can be God’s favorites if they act the part–and very few of ‘em do that.” The reference to Jews was omitted, presumably to protect the former president’s reputation. Hillman never revealed whether it was his idea, or Truman’s, to rewrite the historical record.

Katie Couric, to her credit, has belatedly admitted what she did. Unfortunately, others who have done likewise have not been  forthcoming about their own historical malpractice.

Dr. Medoff is founding director of The David S. Wyman Institute for Holocaust Studies and author of more than 20 books about Jewish history and the Holocaust. This post originally appeared in the Jewish Journal of Los Angeles on October 14, 2021 and is posted here by the author with permission.

They call me "NewsHound IV," because I'm a clever Finnegan, sniffing out stories all over the Boulder area. I love Jewish holidays because the food is GREAT, especially the brisket. Well all the food. I was a rescue pup and glad to be on the scent!
Previous Boulder Jewish Networking Group Open for Business
Next CU Boulder Program in Jewish Studies 2 Offer 2 New Klezmer Programs