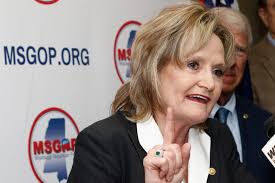 Bruce Ticker April 8, 2021 Guests and Blogs Comments Off on Column: Mississippi Senator Is False Witness To Sabbath Sojourn For Voters

Sen. Cindy Hyde-Smith, a Mississippi Republican, scores zero for two so far on the facts. She falsely claims that Sunday is the Sabbath besides Saturday and, far more importantly, that our civil rights revolve around religious beliefs.

She asserted during a Senate debate in late March that Sundays must be free of voter-recruitment, mainly targeting black churchgoers because of their practice of escorting parishioners from church to polling stations on Sundays. State legislation proposed by Georgia Republicans would prohibit Sunday voting, which prompted Hyde-Smith’s Democratic colleagues in the Senate to question why.

This is the same legislation that would make it a criminal offense to serve water to voters waiting in line at the polls.

The Jewish Telegraphic Agency reports that Hyde-Smith readily replied, directing her remarks at Majority Leader Chuck Schumer specifically. Schumer, who lives in the much-Jewish populated Brooklyn, is the highest-ranking elected Jewish official in history. Hyde-Smith represents the state where an African and two Jewish civil rights workers were murdered by the Ku Klux Klan in 1964.

“He was wondering why on Sundays Georgia would not participate in an electoral process of gathering signatures, registration and things on Sunday,” she said. “Georgia’s a southern state just like Mississippi. I can speak for Mississippi on why we would never do that on a Sunday, or hold an election on a Sunday.

The First Amendment says something different. America may be a Christian nation in numbers, but not under the law. The First Amendment bars the establishment of a state religion while allowing the freedom of all Americans to worship as they please.

Hyde-Smith’s concept of the Sabbath differs from that of black churchgoers. They all worship as Christians, yet African-Americans regard Sunday as convenient timing to promote opportunities to vote. And they have a right to do that.

To quote Hyde-Smith herself, the Sabbath must be kept holy – the Jewish Sabbath, that is. This commandment is issued in the Hebrew Bible, so technically this passage can only apply to the Jewish Sabbath from Friday night to Saturday night. It was written centuries before the birth of Jesus, who inspired the birth of Christianity.

Practically speaking, we typically tie the Sabbath to the weekly holy day for any given religion. That is presumably what Hyde-Smith meant to say, if the execution was clumsy.

It is still disingenuous to invoke the Sabbath as an excuse to prevent voting on a convenient day of the week. Just as disingenuous to prohibit offering water to waiting voters. This senator is all wet.

Bruce S. Ticker, who writes from Philadelphia, also blogs for The San Diego Jewish World and Smirking Chimp and previously for the suspended Philadelphia Jewish Voice. He was previously a reporter and copy editor for daily newspapers in eastern Pennsylvania.
Previous This Shabbat at Nevei Kodesh, April 9-10
Next Pandemic Puts Nonprofits in Peril: What Donors Can Do

No question that American Jews should be anxious about the future of an Israel in Bibi’s hands. There will likely be two prime forces at work that can intensify the conflict with the Palestinians.