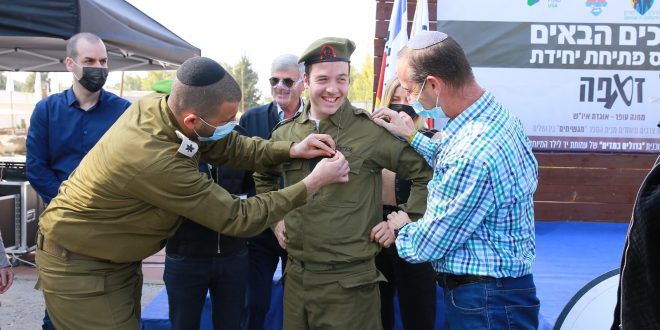 February is Jewish Disability Awareness, Acceptance and Inclusion Month, a time to spread the word about inclusion issues and celebrate the many, varied contributions of people with disabilities to the Israeli workforce and society. As we commence a month in which Israel will seek to create and expand diverse and inclusive workplaces and prospects for people with disabilities, one proud father recounts his family’s story and how his son Amit who was diagnosed at a young age with autism was offered the incredible opportunity to apply his unique skills and talents and pursue his dream of becoming a soldier in the IDF.

Eyal and Meirav Dagan were married for less than five years when their second son Amit, now 20, was born. At the time, Eyal was a senior officer in the IDF, a warrior and combat soldier who spent most of his time away from home, while Meirav was a stay-at-home mom caring for eighteen-month-old Matan and infant Amit.

From Amit’s early infancy, Meirav noticed that something seemed off in his development, and as the months progressed, his delays became more pronounced. He suffered from hypotonia and required a plethora of therapies ranging from physiotherapy to occupational therapy to speech therapy and more. The baby’s delays grew all the more obvious when the Dagans’ third son Ofek joined the family and quickly surpassed his elder brother developmentally.

When Amit was 3 years old, Eyal was off defending the State of Israel and fighting in Gaza when his wife Meirav received the official diagnosis that their son suffered from PDD and was on the autistic spectrum, although it was still early to establish his level of functioning. Both recall the day as if it were yesterday.

“Professor Ruth Shalev of Shaarei Zedek broke the news that Amit suffers from communicational disorders and PDD. I took notes, left the meeting and promptly called my husband to tell him that Amit is autistic and would need a speech therapist. In a calm voice, he replied, ‘Okay. We’ll handle it and give him everything he needs.’”

Which was exactly what occurred. It was a long, difficult road, but over the years, the Dagans made it their priority to provide their son with everything he needed to advance, develop physically, mentally emotionally and verbally, and realize his maximal potential.  Every developmental stage, from crawling to speech, was accompanied by a team of devoted therapists who each gave Amit his or her all, while the parents monitored their efforts and contributed their part, raising a happy, close-knit family.

“Raising Amit was a family project that engaged everyone. Our children grew up in a special home, learning how to respect each other, help one another, help Amit and become better people themselves,” Eyal says proudly. Though it might sound simple and idyllic on paper, life in the Dagan household was anything but that. There was no such thing as building a puzzle, leaving a glass on the table, or even spending quality time together. The Dagans could never host guests for a pleasant, quiet Shabbat meal, sing or chat comfortably over supper. Life centered constantly around Amit and his needs, and was a perpetual, exhausting race, although there also many wonderful, building experiences and angels of mercy who cropped up at the most desperate hours. The Dagans specifically commend Knafayim shel Crembo and Shevet Yovel by Bnei Akiva, both extracurricular programs for special children; Yad Hamoreh in the special schools that Amit attended; and other private and public parties and organizations who filled Amit’s life—and their own—with joy and brought their family comfort, solace and offered them well-needed breaks when they needed it most.

As Amit matured from child to adolescent, he entered the Dr. Israel Goldstein Youth Village (Havat Ha’Noar HaTzioni) where he was embraced by a dedicated faculty who taught him vital social and academic skills and primed him for a successful future.

Amit’s 18th birthday was celebrated with great pomp and circumstance. The Dagans invited a group of thirty friends, including old classmates of Amit’s and volunteers from assorted clubhouses and youth groups, for a gala barbeque and celebration. Some of these kids went back as far with him as seventh grade and were now dispersed across the country in yeshivot, military preparatory academies and myriad other settings. It was a beautiful affair, but at one point, Meirav’s thoughts carried her  eighteen months into the past when they’d hosted a similar—but very different—party for their eldest Matan, then in a commander-training program in the IDF. Turning to her husband, she murmured, “If he were a regular kid, we’d be blessing him with ‘You should be a good soldier.’” But obviously, Amit was a special child on the autistic spectrum—not a regular kid—and such a thing just wasn’t meant to be.

As a longtime soldier and senior officer in the IDF who’d served devotedly for a quarter of a century and been decorated numerous times before retiring honorably, Eyal Dagan had always felt a strong national pride and love of his land, people and military. In the innermost recesses of his heart, he still hoped and prayed that, one day, his three sons—including Amit—would follow in his footsteps in giving their hearts and souls to their homeland and defending their people.

It was a whimsical dream, too remote from reality to be attained… Until the day that Eyal was introduced to Special in Uniform, an innovative program created in conjunction with JNF-USA that integrates youth with mild physical and mental disabilities and autism into the Israel Defense Forces and helps prepare them for a career following army service.  The program offering adolescents with special needs training and skills that empower them to integrate long-term into Israeli society and the workforce by accentuates the unique talents of each participant and placing him or her into an appropriate setting within the IDF.

Special in Uniform’s volunteer training program culminates with graduating youths receiving their soldier’s IDs and being placed in military bases across Israel where they cull from the knowledge and skills that they acquired to perform important jobs on base, forget their disabilities and focus instead on their versatile abilities and talents. In the past decade, thousands of young citizens with physical and mental disabilities have contributed their part to Israel’s military. Over the years, the program has increased by a thousand percent, expanding from 50 to 500 participants in 35 army bases around the country, with a long waiting list. Its passionate leaders are ambitiously planning to ramp up enrollment to 1,000 participants by 2023.

Dagan was deeply impressed by what he saw and heard and, as a retired officer with many connections among the senior military staff, promised to do whatever he could to pull strings, open doors and facilitate communication between schools and institutions geared to adolescents with special needs and Special in Uniform.

His first step was forging the initial connection between Havat Ha’Noar Hatzioni and Special in Uniform, paving the way for older students with autism and various physical and mental disabilities to volunteer on a weekly basis in the IDF’s Judea and Samaria (West Bank) Division’s war reserves storage units.  From the first preliminary meeting, without even hearing exactly what Dagan or the school wanted from them, Lieutenant Colonel Chai Kfir expressed simply, “We heard that you’re advocating for kids with autism and special needs. You folks are in. Now tell us what you need.”

A short while after the kids started volunteering on the base, Dagan received a call from one of Special in Uniform’s commanders who said, “It’s amazing! Your kids are doing here in a few hours what it would take ten soldiers to accomplish in a full day!”

“I was so proud of them,” he expresses emotionally. “So, so proud of them.” Yet the best part was still to come. Eyal and Meirav Dagan, along with sixteen other proud parents, were bursting with pride and joy. After months of volunteering weekly in the war reserves storage units and earning the respect and friendship of regular soldiers in and around their unit, their son Amit and eight fellow alumni of Havat Ha’Noar Hatzioni stood tall and proud at their own swearing-in ceremony. Dressed in spanking new uniforms, they paraded onto stage bearing the Israeli flag, listened to the strains of Hatikvah and received a dogtag and soldier’s beret, finally full-fledged soldiers in the IDF.

They call me "NewsHound IV," because I'm a clever Finnegan, sniffing out stories all over the Boulder area. I love Jewish holidays because the food is GREAT, especially the brisket. Well all the food. I was a rescue pup and glad to be on the scent!
Previous JFest: The Boulder JCC’s February Fundraiser Kicks Off
Next Safta Offers “Dinner and a Movie” Meal for Denver Jewish Film Festival, Through February 17