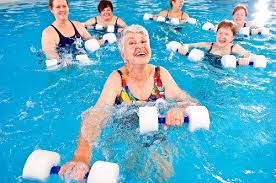 Wisdom From the Water

Lori Dube January 30, 2020 Jewish Life Comments Off on Wisdom From the Water

I was doing my best to keep up in my water aerobics class at the East Boulder Rec Center when the teacher instructed us to do a cross country ski motion underwater. I was was having a hard time synchronizing the alternating movements of my arms and legs. After a while of doing it wrong, I got frustrated, stopped, took a breath and very deliberately reached my right arm out while reaching back  with my left leg.

Lost in concentration — surprising how much focus I needed to get it right — I heard the wonderful teacher, Laura Olinger, call out to me, “Beautiful Correction.”
“Beautiful Correction….Beautiful Correction,” I repeated to myself, not just because I liked the sound of these two words together, but because the unlikely combination tickled me too.
I’ve always correlated the word correction with mistake, error, something I did wrong. In my mind, the words I usually attached to correction were “I messed up, I better make a correction,” or even more harsh self-talk like, “What’s wrong with me? Why do I always get this wrong? I have to make a correction…fast!”
So the notion that changing gears after a mistake could be a positive, even beautiful thing seemed like a revelation to me. Making an adjustment, a course correction, to my limbs under water, or to my life and relationships out of the pool, suddenly seemed like an act of self compassion, even something to be proud of.
Now that I am wearing my Beautiful Correction lens, I’ve been spotting them everywhere. Even buried in the Bible.
In this week’s Torah portion, Bo, we read about the Israelites fleeing Egypt after the Ten Plagues drama. Before they left, they are instructed to ask their Egyptian neighbors for some of their valuable possessions to take with them…and they give it to them. Wait a second, I thought. What is this about??
Exodus 12:35-35 says, “The Israelites had done Moses’ bidding and borrowed from the Egyptians objects of silver and gold, and clothing. And the Lord had disposed the Egyptians favorably toward the people, and they let them have their request; thus they stripped the Egyptians.”
There is lots of speculation in various Torah commentaries about why the Egyptians were so willing to just hand over their jewelry to the Israelites, who had been their slaves for hundreds of years. Maybe the Egyptians were fearful, after all those horrible plagues, and were willing to do anything they could to get the Israelites to just leave, and take the wrath of their G-d with them. Or, maybe it was the hand of G-d, that opened the hearts of the Egyptians, and led to their act of kindness towards the Israelites. Or maybe, just maybe, the Egyptians were making a Beautiful Correction.
Even if slavery was the order of the day, for one human being to control and abuse another can be seen as emotionally wounding for both parties. Obviously, those in bondage suffer much greater pain, trauma and despair. But I wonder, if after all the chaos and deception with Pharaoh, was it possible that the Egyptians’ offering of gold and silver to the Israelites was some form of reparations for the way they were treated as slaves. Could the Egyptians, who observed the Israelites’ abuse up close as their neighbors, finally be saying “Enough” to the injustice of slavery and making a gesture of atonement?
I admit this read of the text may be a little too hopeful, a little too optimistic about what was in the hearts and minds of the Egyptians as our people were embarking on their sacred journey from slavery to freedom. But this whole notion of Beautiful Correction has got me thinking about my own attempts to evolve and improve, and make amends for past mistakes. And, is common with acts of self compassion, as our meditation teachers tell us, often it can lead to feeling more compassion towards others.
Even the Egyptians.

Previous Weekly Edition: January 31st, 2020
Next Make 2020 Your Year to Travel to Israel