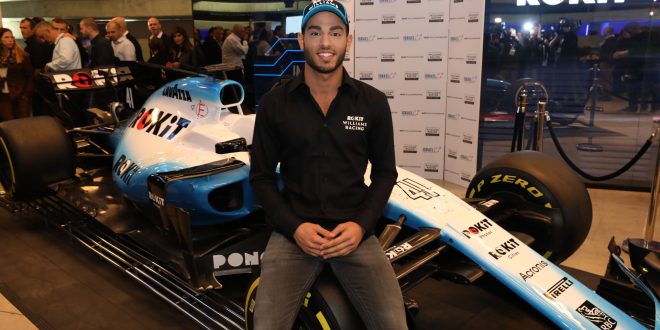 15 January 2020 (Tel Aviv) – It was announced today that Roy Nissany will become the official test driver for the Williams Group, making him Israel’s very first Formula One driver. Nissany was joined at a press conference this morning at the Peres Center for Peace and Innovation, by the group’s president Claire Williams and Sylvan Adams, who has supported Nissany’s development in motor racing and serves as president of Nissany’s management group.

25-year-old Nissany, who began his journey in motor racing aged 14, comes to Formula One, following two very successful seasons in Formula V8 3.5, where he secured thirteen podium finishes and reached pole position seven times. Nissany’s achievements include two consecutive victories at the Silverstone track in UK, plus wins at Italy’s Monza track, France’s Paul Ricard circuit and Jerez in Spain. Nissany competed in the Formula Two championship in 2018, but missed last season due to injury.

Back in 2014, Nissany completed his first test in a Formula One car with the Swiss team Sauber Motorsport. In early December, Nissany was asked by Williams to participate in two days of testing in Abu Dhabi, after which the group decided to sign the Israeli as the team’s third driver. As such, Nissany will train with the team and drive on Fridays during Grand Prix practice at Formula One weekends, waiting for the opportunity to compete behind the wheel of one of Williams’ two championship cars.

“Today, I achieved the goal which I set for myself many years ago, to become a Formula One driver. This is a very exciting moment, not only for me, but also for everyone who has been with me along the way over the years. Formula One reaches a huge audience of fans and I am so pleased that they will now get to know Israel through the motor racing track.”

“It is a pleasure to welcome Roy Nissany to ROKiT Williams Racing in the role of our Official Test Driver. Roy demonstrated his capabilities driving in the post-season Abu Dhabi test last year and we were extremely impressed with what he could do in a short space of time. He is a hard-working individual who we are excited to be working with this year.”

Sitting alongside Claire Williams at today’s press conference was Sylvan Adams, President of the “Roy Nissany Formula One” management group. Adams is also the co-owner of the Israel Start Up Nation cycling team, which will compete in next summer’s Tour de France. For several years, Adams has been working to showcase Israel through international sporting and cultural events. Among his recent initiatives, Adams was responsible for bringing the Giro d’Italia bike race to Israel, Madonna’s appearance at last year’s Eurovision Song Contest and the recent international football match in Tel Aviv between Argentina and Uruguay, featuring Lionel Messi.

Adams began working with Nissany approximately a year ago, understanding that his talent provided another opportunity to place Israel on the global sporting stage. With no suitable infrastructure for Formula One racing in Israel, Adams decided to actively support Nissany’s ambition to join Williams and Formula One, becoming president of his management group.

Adams commented, “This is yet another landmark moment for Israeli sport. Hundreds of millions of motor racing enthusiasts across the world will get to see a different side of our country, what I call ‘normal’ Israel. I have no doubt that Roy will do a wonderful job representing our country with dignity and pride. I cannot wait for the moment when we see the blue and white flag on a Formula One car.”

At this morning’s press conference, Chemi Peres, Chairman of the Peres Center for Peace and Innovation and son of Israel’s former-President Shimon Peres, bestowed the title of “Ambassador of Peace” on Claire Williams.

Peres said, “Today, Roy Nissany proved that what we thought was impossible, is possible. This is our motto at the Peres Center for Peace and Innovation. It was also the legacy of my father, Shimon Peres, the Ninth President of the State of Israel. It is a legacy which we continue today, as we educate the next generation. We instill them with important values, which can also be found in the world of motor racing, that through patience, tolerance and teamwork, the impossible can be achieved.”

They call me "NewsHound IV," because I'm a clever Finnegan, sniffing out stories all over the Boulder area. I love Jewish holidays because the food is GREAT, especially the brisket. Well all the food. I was a rescue pup and glad to be on the scent!
Previous This Week for CU’s Jewish Buffs – 1/20
Next Information Session for Prospective Bar and Bat Mitzvah Families