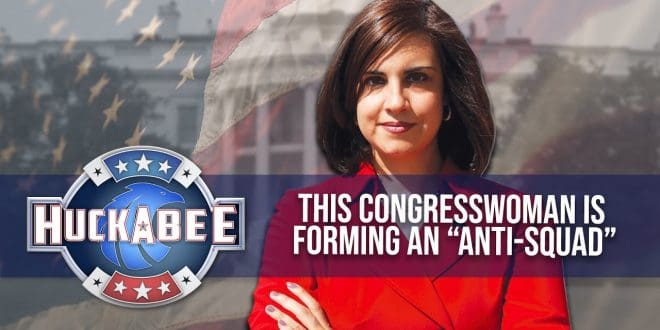 Bruce Ticker December 17, 2020 Guests and Blogs Comments Off on Looming: The GOP’s Anti-Squad

“From the River…” etc. is meant as the stretch of land that comprises Israel and its territories, all of which many Palestinians claim is theirs.

Both Nicole Malliotakis and Maria Elvira Salazar will be traveling regularly to the Potomac, the former from the Narrows (which separates Staten Island from southern Brooklyn) and the latter from Miami. They could both form part of a Republican faction in the House of Representatives that will rake Tlaib’s “Squad” over the coals each time that Tlaib and friends open their big mouths.

A Republican “Squad” has much potential to counter Democratic representatives who have been operating a four-woman faction known as the Squad for the last two years, but the Republicans’ comments already suggest that they will overreach, threatening to transform extremists among Democrats into political martyrs.

Israel’s status is the most pressing concern attributed to Tlaib, Ilhan Omar and other Democrats in the House. Early in her tenure, Tlaib posted a map in her office that replaces Israel with “Palestine.”

Late last month, Tlaib retweeted a tweet from an account that featured the phrase, “From the river to the sea, Palestine will be free,” referencing Israel’s waterway borders of the Jordan River to the Mediterranean Sea, according to the Jewish Telegraphic Agency. The phrase was accompanied by an image of a poster marking the International Day of Solidarity with the Palestinian People, which was Nov. 29.

That date was the 73 rd anniversary of the United Nations vote to partition British Mandate Palestine into Jewish and Arab states. Zionists accepted the partition, and the Arabs rejected it and invaded Israel.

Following criticism from pro-Israel groups, Tlaib removed the retweet from her timeline and replaced it with her own tweet of the poster crediting the artist and noting that she marked the day by thinking of her family near Ramallah, according to JTA.

“Rashida Tlaib is not just opposed to Israeli control of the West Bank,” stated the Democratic Majority for Israel in a tweet. “This slogan means she sees the entire state of Israel as illegitimate and wants it eliminated. That’s an immoral and reprehensible position.”

When she first ran for Congress in 2018, Omar told Minneapolis-area Jews that she conceded that the Boycott, Divestment and Sanctions movement against Israel would deter peace talks between Israel and the Palestinians; after she was elected, she told a magazine reporter that she supports BDS.

Other House Democrats have unfairly criticized Israel, but none have been so crude about it as Tlaib and Omar, both Muslims. Omar moved from Somalia to Minneapolis as a child and Tlaib, born in Michigan, has a grandmother who lives near Ramallah on Israel’s West Bank.

A less urgent concern is the perception that their stance on domestic issues will turn America into a Stalinist regime. This much-exaggerated reputation has already reflected on the Democratic Party as Democrats won only two of five vulnerable GOP-held Senate seats, unexpectedly lost House seats and President-elect Joe Biden took much fewer states than foreseen.

Of course, the election results might have been different if more pragmatic Democrats set the record straight on the party’s goals, but they’re too afraid of the Squad’s followers whose votes they need. Their proposals to improve social conditions are often merited, though one can disagree with some of their ideas.

Notably, Salazar stressed her support for Israel, and both Republicans pounded on the Squad’s declarations for socialism and defunding the police. Malliotakis, who ousted Democrat Max Rose after one term on Nov. 3, said on CNN’s “State of the Union”: “What you’re going to see is a group of individuals who are going to serve as a counterbalance to the values of the socialist squad.

“When you say the word socialism in my district, people run the other way,” said Salazar, who defeated incumbent Democrat Donna Shalala, according to Jewish Insider. “We need to explain to the American public…that bashing on the system, it’s wrong.

“We believe that the American agenda still works, that American exceptionality is still alive, and we need to send that message for the benefit of our children and future generations.”

Already, they overplayed their hand. To challenge their own words, how is the Squad dismantling the economy? Is packing the courts necessarily bad? Who doesn’t bash the system from either the right or the left? If the American agenda “still works,” whose American agenda is she talking about?

Salazar has dubbed her new group the “Freedom Force,” while Malliotakis separately indicated that their group could be called the “Freedom Squad.”

Let us hope that any Freedom Force or Freedom Squad is not the freedom to lie, distort and bash indiscriminently.

This Freedom Force could perform a valuable service for Israel supporters by correcting the record whenever Omar, Tlaib or others misrepresent Israeli actions, or otherwise portray American Jews as co-conspirators whenever Israel does something questionable.

I recall watching Republican members of Congress on television defend Israel in a rational, convincing manner while some Democrats would rationalize liberal positions regarding Israel and its supporters in America. It is usually the opposite on domestic issues when Democrats would appear articulate and Republicans would equivocate. Other Republicans have overdone it when calling out Democrats on Israel.

Of course, Republicans can likewise challenge the Squad’s positions on health care, the environment and other issues which spark concerns even among many Democrats.

If Republicans merely exploit the Squad’s pronouncements to make political hay, they will help nobody. They will be no better than the Squad.

Bruce S. Ticker, who writes from Philadelphia, also blogs for The San Diego Jewish World and Smirking Chimp and previously for the suspended Philadelphia Jewish Voice. He was previously a reporter and copy editor for daily newspapers in eastern Pennsylvania.
Previous Gavriela Schultheiss Bat Mitzvah
Next Registration Opens for Kabbalah Experience’s Winter Semester