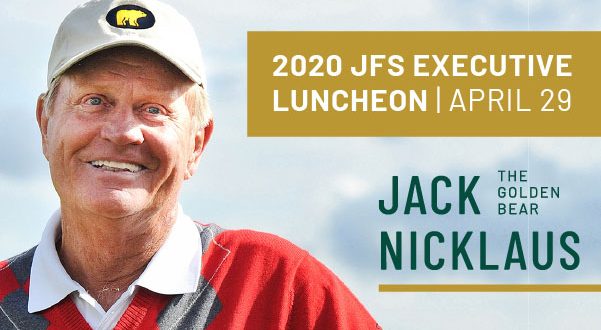 Nicklaus will reflect on some of his amazing life experiences, highlight his lifelong commitment to family and the future of our children, and through the conversation, perhaps share golden lessons for success and how to live up to your full potential in work, life, and sport. Event co-chairs are Julie and Brent Morse and Jordan and David Feiner.

All proceeds from the event will help support all programs of JFS to help those in need navigate life’s challenges through integrated support. Founded in 1872, JFS is a nonsectarian, nonprofit human services agency serving people of all faiths, races, ages, incomes, and abilities. 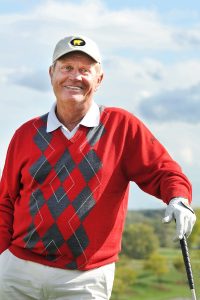 No name is more synonymous with greatness in the sport of golf than the name Jack Nicklaus, and no single person has changed the face of the sport more than Jack Nicklaus—the player, the designer, the philanthropist, and the good-will ambassador.

In June 2018, the Golden Bear received the Lincoln Medal from the Ford’s Theatre Society, making Nicklaus just the fourth person in history—and the first athlete or sportsperson—to be honored with the Presidential Medal of Freedom (2005), the Congressional Gold Medal (2015), and now the Lincoln Medal.

Nicklaus’s competitive career spanned five decades, and his legend has been built with 120 professional tournament victories worldwide and a record 18 professional major-championship titles (six Masters, five PGA Championships, four U.S. Opens, three British Opens). He is one of only five golfers—Gene Sarazen, Ben Hogan, Gary Player, and Tiger Woods the others—who have won all four of golf’s modern majors, an achievement often referred to as the career “Grand Slam.” Nicklaus remains the only player to have completed the career Grand Slam on both the regular and senior tours. His eight majors on the senior circuit, now called the PGA TOUR Champions, stood as a record from 1996 until 2017.

The legacy Nicklaus has left as a player can be rivaled only by the legacy he is leaving as a golf-course designer, businessman, and philanthropist. He was voted the 2017 Golf Course Designer of the Year, 2014 Architect of the Year, and many more. He was also recognized with the Golf Course Superintendents Association of America’s highest honor, The Old Tom Morris Award. Nicklaus has been involved in the design of more than 300 courses open for play worldwide, and his thriving business, Nicklaus Design, has more than 425 courses open for play worldwide, which are represented in 45 countries and 40 states.

Nicklaus and his wife Barbara have a long history of involvement in numerous charitable activities, from junior golf to children’s hospitals to several scholarship foundations. They are the guiding light for the Nicklaus Children’s Health Care Foundation, which supports numerous pediatric health-care services in South Florida, as well as nationally, and has raised over $100 million since its inception in 2004.

Founded 150 years ago, we currently offer more than 30 programs and services, including food security, housing stability, mental health counseling, aging care, employment support, and disability services. JFS takes a holistic approach, assessing the various needs of the individual or family and provides the appropriate services all from one organization.
Previous JCRC Calls for Holocaust Education Policy, Hosts State Capitol Event
Next Nosh and Network at the Boulder JCC This Tuesday