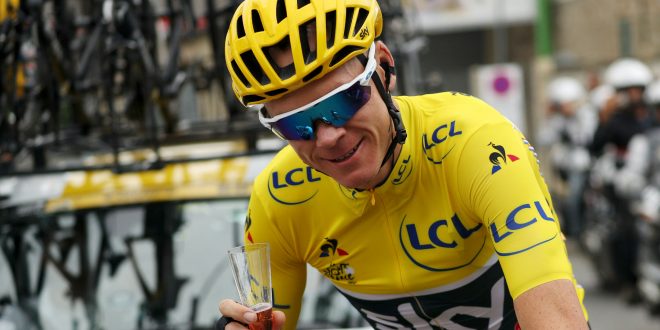 The Israeli team and the legendary champion will sign a long-term contract on August 1st that will see Froome wear ISN’s blue and white until the end of his illustrious career.

“This is an historic moment for ISN, Israel, Israeli sports, our many fans all around the world and, of course, for me personally – a moment of enormous pride” said the team’s co-owner, Sylvan Adams.

“I’m really excited to be joining the ISN family. I look forward to challenging and being challenged by their talent and continuing to strive for the success that I’ve enjoyed up to now. ISN’s impact on the sport is rapidly expanding, and I’m energized to be along for the ride. I feel we can achieve great things together.”

Team Israel Start-Up Nation’s rapid progression from its beginnings as a Continental team to the WorldTour in just five years has now entered its next phase, explained ISN’s Team Manager, Kjell Carlstrom: “We have been looking to strengthen the team for 2021 in several ways, not least of which is to become Grand Tour contenders. With his impressive achievements, Chris Froome is the perfect leader to mark our arrival as a serious contender for these races, particularly the Tour de France. Chris’ career has been extraordinary, and we believe that he has both the mindset and physical talents to win more Grand Tours with us, while also acting as a mentor to our young talents, helping them succeed.”

“We are committed to building a supportive Grand Tour team around Chris, such that we can make history together, as we compete to be the best, and achieve our principal goal: winning the Tour de France” said Mr. Adams. “I am proud of the road we have travelled, which includes hosting the historic 2018 Giro d’Italia Grande Partenza in Israel, nurturing young Israeli talents, and inspiring a new generation of riders in Israel to take up the sport. With Chris, we will move to new heights at the very top of the sport. I wish to add that I admire Chris not only for his success as a cyclist, but also for how he conducts himself, as a true gentleman, off the bike. Chris will be a great role model for our team.

Founded to elevate and popularize the sport of cycling in Israel and other emerging cycling nations, Israel Cycling Academy has grown, in just a short period, from a humble Continental level team to becoming a WorldTour team under the name “Israel Start-Up Nation”.

They call me "NewsHound IV," because I'm a clever Finnegan, sniffing out stories all over the Boulder area. I love Jewish holidays because the food is GREAT, especially the brisket. Well all the food. I was a rescue pup and glad to be on the scent!
Previous Upcoming Virtual Offerings at Nevei Kodesh 7/10 – 7/16
Next Welcome Two New Community Members