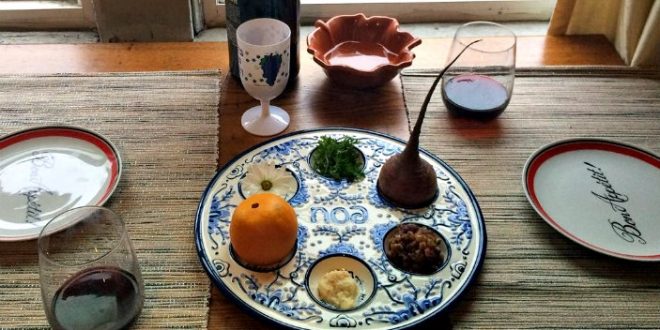 Your Choices Matter: Adding Social Justice To Your Seder

Michele Weingarden April 21, 2019 Passover Comments Off on Your Choices Matter: Adding Social Justice To Your Seder

As you complete your preparations for Pesach, here’s a little food for thought. We rejoice in the liberation of our ancestors from slavery in Egypt, but what about all of those around the world still suffering today? Pesach gives us an ideal platform to raise awareness of today’s social injustices with our guests around the table. The consumption choices we make for our Seders matter. The addition of modern symbols can educate others and spark conversation about how we can all work to make the world a better – and more liberated – place today. Here are a few modern symbols to consider. I will be adding a few of these to the center of my Seder plate, but you can also make a full second Seder plate of these alone.

Orange: Cherishing one another

Many consider this addition of an orange derived from a man telling Professor Heschel that a woman belongs on the Bimah no more than an orange belongs on the Seder plate. Whether or not that actually happened, today we place an orange to firmly say that ALL people are welcome and belong in the Jewish community and no one should feel marginalized.

Pinecone: Justice For All

A pinecone on the Seder plate began at Temple Israel in Boston. The congregation added a pinecone to remind us to work to free those who are wrongly imprisoned. As a pinecone “imprisons” its seeds and requires the hard work of nature to release them, so too will the hard work of humanity be required to repair these people’s souls. The congregation’s Passover insert stated, “This Passover, we refuse to pass over our prisons because we know that inside is G-d’s most precious fruit of all: the human soul.”

The cashew is placed to honor U.S. troops in the Middle East and around the world. Cashews provide sustenance and hydration in a desert climate. A sign in a Newton, MA store window urged customers to buy a bag of cashews to send to troops in Iraq. This idea was started by an employee at the store whose son was serving there. A local rabbi was compelled to add the cashew to his congregation’s Seder plate.

The artichoke is meant to symbolize the interfaith-friendly Seder plate. Rabbi Geela Rayzel Raphael suggests the addition of this prickly vegetable with the soft heart, writing on Interfaithfamily.com: “Like the artichoke, which has thistles protecting its heart, the Jewish people have been thorny about this question of interfaith marriage.”

Banana: We Are All Migrants

The banana symbolizes the world’s refugees, especially children, and those struggling for freedom from political hardship and war throughout the world, just as Passover commemorates the Jews fleeing Egypt. This addition began after 2 little boys and their mother drowned off the coast of Turkey, fleeing war-torn Syria in 2015. Their father survived and often speaks about his little boys’ love for bananas, a luxury in Syria during the war. Each day after work, their father would bring the boys a banana to share.

The olive symbolizes a call for peace between Israelis and Palestinians. As the olive branch has always been a symbol of peace, the olive calls for us to seek peace where there has been war.

The tomato represents unfair working conditions and low pay for many farm workers around the world. There is a campaign to get more farms to sign on to the Fair Food Agreement, enforcing more safety protections and a higher wage, and to demand that our markets and restaurants practice ethical buying standards. Placing a tomato on the Seder plate is a reminder to confront this injustice.

The altered Seder plate is designed to alert Jews to the lack of access to fresh, healthy food in many low-income neighborhoods. A rotten piece of lettuce replaces the crisp lettuce leaf, symbolizing that inner-city grocery stores often carry spoiled produce. A potato chip replaces the karpas potato, symbolizing that potato chips are often easier to find in these neighborhoods than whole, raw vegetables.

Potato: Honoring the Exodus of Ethiopian Jews to Israel

Operation Solomon successfully brought Ethiopian Jews homes to Israel, beginning in 1991. Many of these refugees were undernourished and had trouble digesting many foods. Israeli doctors fed them boiled potatoes and rice to help their systems adjust. Adding red potatoes to your Seder meal along with the karpas commemorates this modern day journey to freedom.

Miriam’s Cup: The Role of Women

A cup of water is placed next to Elijah’s cup to recognize Miriam’s role in Exodus and the Jews freedom from slavery. Miriam’s Cup also symbolizes the role of women in ensuring the survival of Jewish community. All Seder participants are asked to pour a bit of water into the cup to recognize ongoing issues of social injustice.

Selecting certified higher welfare eggs demonstrates an important commitment to animal welfare and the humane treatment of chickens and other creatures. As explained by Hazon, “Jewish tradition teaches us to have compassion for all creatures, especially those who rely exclusively on humans for proper mental and physical care.” A typical commercial farm hen spends her entire life in a small cage and unable to perform her natural behaviors, like nesting, perching and dustbathing. She cannot stretch or walk. Higher welfare eggs come from farms that allow their hens to engage in their natural behaviors, spread their wings, and lay eggs in nesting spaces. Higher Welfare Eggs are labeled with a Certified Humane sticker.

Michele Weingarden lives in Superior and is a Colorado Advisory Board member for Hazon. She looks forward to sharing modern social justice symbols to her Seder tonight.
Previous From Broadway to Boulder!
Next Hadassah Presents: Zionism, It’s Not a Dirty Word