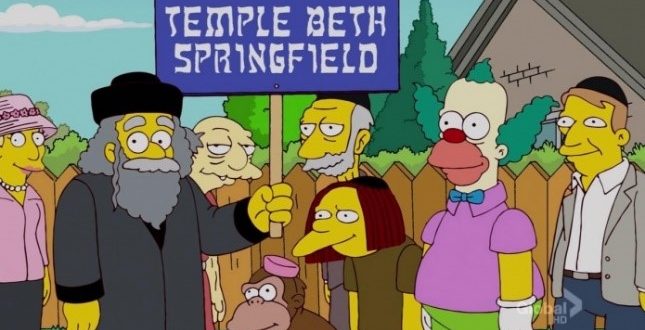 Secrets of “The Simpsons” – Who Knew?

Kathryn Bernheimer September 2, 2019 Arts & Culture Comments Off on Secrets of “The Simpsons” – Who Knew?

Mathew Klickstein is an author, journalist, pop culture aficionado, filmmaker, arts therapist working with people living with disabilities, screenwriter, playwright, humorist, comic book creator, and geek culture enthusiast. After receiving his BFA in screenwriting from USC, Mathew jumped into the world of making his own films and TV shows, also writing articles and books about his favorite pop culture subjects.

You may be wondering which hat he will be wearing when he comes to the Boulder JCC on Thursday, September 19 at 7:00 pm for a talk titled “Secrets of “The Simpsons” – Who Knew?” REGISTER HERE. 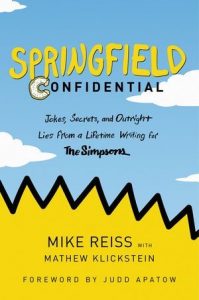 I make no promises for the garrulous pop culture commentator, but his topic is the hidden Jewishness of “The Simpsons.” Specifically, he will discuss the book he co-authored with four-time Emmy Award-winning comedy writer Mike Reiss, “Springfield Confidential: Jokes, Secrets, and Outright Lies from a Lifetime Writing for The Simpsons,” (Harper Collins, 2018).

Vanity Fair called the book “extremely funny.” USA Today’s Bill Keveney called the work “… full of humorous asides and fun facts.” Vulture listed Springfield Confidential among its “Top Ten Comedy Books of 2018.” The New York Post included Springfield Confidential in its list of “Most Unforgettable Books of 2018.” Kirkus Reviews referred to the book as “a charming look at a cherished American show.”

Reiss, who has worked on “The Simpsons” continuously since episode one in 1989, shares stories, scandals, and gossip about working with America’s most iconic cartoon family ever, explaining how the episodes are created, and providing an inside look at the show’s writers, animators, actors, and celebrity guests. The Harvard grad reminisces about the making of perennially favorite episodes.

Working with Reiss on this behind-the-scenes memoir, Klickstein gained unique insight into the series created by Matt Groening that has captured the world’s imagination for 30 years. He has the inside goods on what makes The Simpsons so funny, so culturally impactful, and so, well, Jewish.

Nearly Bart’s age when “The Simpsons” first aired in late 1989, Klickstein has seen almost all 700 episodes of the longest-running prime time American scripted show in history.

Join ACE for this examination of the influence of Jewish culture on the show in a guided discussion featuring clips and anecdotes.

Secrets of “The Simpsons:” Who Knew?
With Mathew Klickstein
7:00 pm, Thursday, September 19
$15 in advance/$18 at the door/$10 students
Learn and register

Tags ACE at the J book talk rscs the simpsons

Kathryn has spent her professional life writing about, teaching, and presenting the arts. Founding Director of the Boulder Jewish Film Festival, Kathryn was Director of Menorah and ACE at the Boulder JCC from 2003 through August, 2019. The former film and theater critic for the Boulder Daily Camera, Kathryn is the author of "The Fifty Greatest Jewish Movies" and "The Fifty Funniest Films of All Time." kathryn.bernheimer@gmail.com
Previous D’var Shana: What Climbing a Mountain and Bar Mitzvah Share in Common
Next Weekly Edition: September 6th, 2019