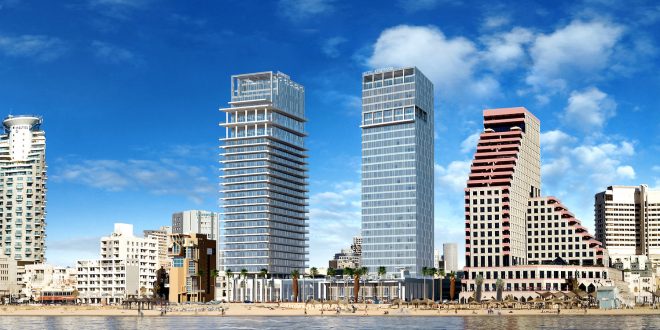 As a rising powerhouse in global beach city tourism, Tel Aviv has undergone a massive re-branding and awakening in the minds of global tourists. 2018 saw 4.1 million tourists visit Israel, up 14% from the year previous with tourists spending 5.94 million nights at Israeli hotels during the first half of 2018. With 8.7 miles of continuous beaches along the Mediterranean Sea, Tel Aviv’s “Tayelet” boardwalk spans from the ritzy North Tel Aviv neighborhoods, through the leisure-focused Tel Aviv port, along the city center and to the Old City of Jaffa. The city’s main boardwalk strip has recently undergone a full renovation by Mayslits Kassif Architects with new piers, beach clubs, bike lanes, shade, seating and outdoor gyms. The demolition of the abandoned Dolphinarium is the final culmination of boardwalk renovations that will create a new pier and surf club in Q4 2019.

The historic core of Tel Aviv’s city center houses more than 4,000 registered UNESCO buildings and historical landmarks among the city’s iconic Eclectic, Bauhaus and International-style buildings. The area spanning from Rothschild Boulevard to the Mediterranean Sea has some of the most expensive land value in Israel and an increasingly international expat community of North Americans and Europeans. This rise in land value has fueled a makeover of the Tel Aviv cityscape with high-end towers, skyscrapers and cosmopolitan apartment complexes sprouting across the city and lighting up the seaboard.

A new wave of development alongside the sea is transforming Hayarkon Street and the coastal area into a world-class, luxurious city neighborhood. Large scale development in the boutique hotel sector has forced chains to adapt and renovate along the boardwalk to keep up with a more savvy traveler who is looking for design, heightened amenities and cultural connection to the city. The Brown Beach House by Brown Hotels brought Miami-vibe to Tel Aviv and was among the first to reclaim Hayarkon Street for its proximity to the sea. The luxurious Setai Tel Aviv and The Jaffa Hotel close to the sea along Yefet Street in Jaffa, have begun a new era of luxury accommodation in the city.

Next year, Kempinski Hotels will open a five-star property on Hayarkon Street, with an attached luxurious residential tower, David Promenade Residences. The Residences are situated directly on the “Golden Mile” of Tel Aviv’s Mediterranean Sea coastline with a 28-story residential tower. A whole new standard of residential development along the coastal road, The Residences will feature unparalleled views, location and the amenities of a hotel from 24/7 security, room service, housekeeping, pools and spa treatments.

They call me "NewsHound IV," because I'm a clever Finnegan, sniffing out stories all over the Boulder area. I love Jewish holidays because the food is GREAT, especially the brisket. Well all the food. I was a rescue pup and glad to be on the scent!
Previous Ava Sommer & Sophie Ostrov B’nai Mitzvah
Next This Week for CU’s Jewish Buffs – 4/1