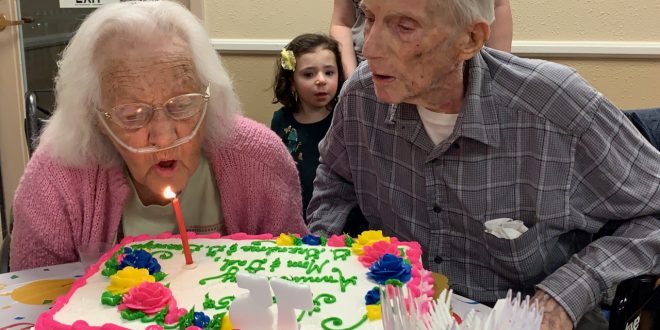 One month ago on December 11, Judith & Carl Herbet, the parents of Marilyn Pinsker, celebrated their 75th wedding anniversary. Judy is 93 and Carl is 97. They were living independently until one year ago when Judy’s health required more attention than Carl could support. Both Judy and Carl were born in New York City. They were married on December 11, 1943 while Carl was serving in the Coast Guard. They have been living in Boulder for 22 years.

The Herbets have two daughters: Marilyn, who is a founding member of Congregation Bonai Shalom, and Susan, who with her husband and two sons, moved to Colorado with the Herbets, settling in Loveland. The Herbets have four grandchildren and currently have six great-grandchildren. They renewed their marriage vows with the help of Rabbi Marc Soloway of Bonai Shalom and their Hospice chaplain.