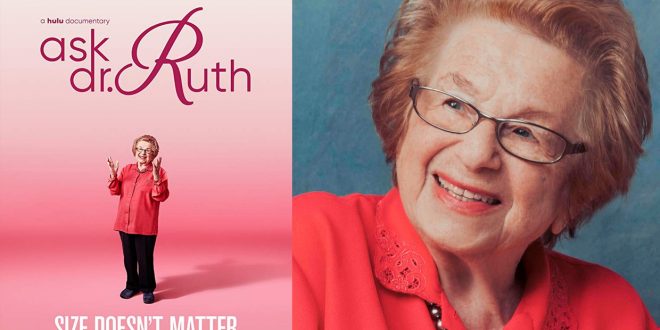 “Ask Dr. Ruth” Is As Impossible To Resist As The Famed Sex Therapist Herself

Kathryn Bernheimer August 8, 2019 Arts & Culture Comments Off on “Ask Dr. Ruth” Is As Impossible To Resist As The Famed Sex Therapist Herself

When it comes to sex, no subject is taboo for the famously frank Ruth Westheimer, who ushered in an era of candid conversation about the most private of personal activities.

Dr. Ruth gained world renown as an outspoken champion of “good sex” – cheerfully peppering her heavily accented speech with words like vagina, erectile dysfunction, and clitoral orgasm. The diminutive dynamo emerged as a legitimate expert who offered a welcome antidote to the pervasive shame and secrecy that surrounded sex.

There is one subject, however, which the loquacious celebrity has been loath to discuss until now, preferring to keep the pain she endured as a child during the Holocaust to herself.

“Ask Dr. Ruth,” Ryan White’s long-overdue documentary about the world’s best-known sex therapist, coaxes its subject into discussing the traumatic events that shaped her early life. Her willingness to reflect for the first time on these painful memories proves that she is not just tenacious but actually courageous. The revelations made as she celebrates her 90th birthday also bring depth to the biography of a remarkable woman.

Shortly after Kirstallnacht, Karola Siegel’s parents, Orthodox German Jews, put their 10-year-old daughter on a train to presumable safety in Switzerland. Placed in a Swiss orphanage in 1939, she received letters from her parents until 1941. It is assumed they perished in Auschwitz.

The 4-foot, 7-inch “Holocaust orphan” – as she calls herself – would eventually arrive in America, earn graduate degrees in sex therapy and relationship counseling, become a professor, a TV personality, the author of 46 books (including “Sex for Dummies”), the darling of late night talk shows, and a sought-after speaker around the world. Her smiling munchkin face graced magazine covers, and her inimitable voice was described by the Wall Street Journal as “a cross between Henry Kissinger and Minnie Mouse.”

Before arriving in America, where her improbable destiny awaited, she was a sniper for the Haganah and worked on a kibbutz. She studied at the Sorbonne in Paris, has been married three times, and is a fearless skier. She is a doting grandmother who credits her strength to Jewish faith.

Her experiences made her tough and resilient. They also made her deeply compassionate, determined to ease her clients’ pain and shame. The public embraced her. Despite the inevitable controversy that her non-judgmental, no-nonsense approach to sex aroused, audiences found her irresistible and hilarious. What’s more, she made increasing sense at a time when feminism, AIDS, abortion, LGBT rights, and other counter-culture movements were sending shock waves throughout puritanical America.

Before the internet, personal advice of any kind was hard to come by. You could seek private counseling, or you could read a book by an expert. When Dr. Ruth popped up on TV screens looking – and sounding – nothing like the stern, disapproving academic one might expect, she filled a huge hunger for sound advice.

“You saved my life,” many fans have told her. The world indeed owes her a debt of gratitude. “Ask Dr. Ruth” is a fitting tribute to the miracle worker of good sex.

Kathryn has spent her professional life writing about, teaching, and presenting the arts. Founding Director of the Boulder Jewish Film Festival, Kathryn was Director of Menorah and ACE at the Boulder JCC from 2003 through August, 2019. The former film and theater critic for the Boulder Daily Camera, Kathryn is the author of "The Fifty Greatest Jewish Movies" and "The Fifty Funniest Films of All Time." kathryn.bernheimer@gmail.com
Previous ADL: Hate Crimes in Colorado Nearly Doubled from 2017 to 2018
Next Noah Sodie Bar Yisrael