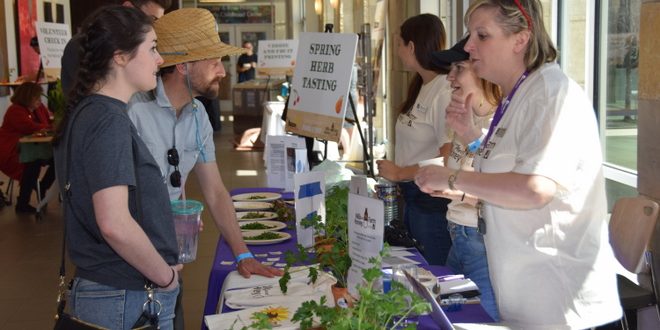 Almost 700 community members ate and toured and learned their way through the 2019 Colorado Jewish Food Fest on Sunday at the Boulder JCC. They were treated to plenty of Passover-themed elements of the day, including tasting Charosets from Around the World, a Passover Tour of the Milk and Honey Farm, Seder Plate Activism and a Passover Desserts competition (results to follow).

There were also Do-It-Yourself stations, such as Making Your Own Tee Bag, A Make Your Own Chicken Soup bar, and The Nose Knows – a scent test. The learning opportunities included a Salt table, a Bread table, a Minimize Your Food Waste table, and workshops on Beekeeping, Edible Flowers and Jewish Food as Medicine.

One of the highlights of the day was the Passover Dessert Competition, won by Lauren Hartstein, with a recipe for French Macarons with Vanilla Buttercream. She also won last year’s Food Competition with her winning Kugel recipe!

And oh, there was food to actually eat, as well! There was a latke bar from Latke Love, breads from Rebel Breads, and a sampling of Israeli and middle eastern fare from River and Woods’ sister restaurant, Ash’Kara. The whole list can be found here.

“What I most love about the Colorado Jewish Food Fest is that it’s not a one-day event. Yes, there is an event that happens in a specific place, on a specific day, at a specific time. But it takes months of visioning and planning that strengthens and betters our community before the event even happens.

“And the way people’s lives are affected as a result of attending the event lasts for months and years. People who attend the Food Fest tell us it inspired them to do things like grow a vegetable garden, make their own challah, purchase more organic food, volunteer more, and start saying blessings! People get both the inspiration and information needed to make life-long changes and that’s what motivates and excites me the most about the Colorado Jewish Food Fest.”

The volunteers and presenters were psyched too. Rachel Irons led the “Charoset from Around the World” tasting activity and shared that “People were so stoked about the charoset station. And it was a great learning experience for me; before planning this I didn’t even know there was more than the one kind of charoset I grew up with.”

Michele Weingarden and Shari Schnee coordinated the Seder Plate Activism activity and Michele shared that many people visiting their table said, “I’m so inspired. I’m ready to take my seder to the next level.”

Kira Rukin, who planned and executed the DIY Tee Bags station (not a typo, it was making bags out of T-shirts), shared “I could explore with enthusiasm. I’m completely ignited, connected, and glad to be part of this community.”

One person who sampled the chicken soup at the Chicken Soup for the Soul, Colds and More activity shared that it was the only chicken soup she’s ever had that tasted like her grandmothers, which was likely due to our use of the now-extremely rare (kosher) heritage chicken, which would’ve been standard and common in the grandmother’s time, but has since been nearly completely shut out of the market in the past few decades.

Molly Sease, the Farm Educator at the JCC, said, “It was so sweet seeing parents connect with their kids at the Passover on the Farm program, seeing them get dirty together and having ‘aha’ moments together. There were many who had eaten broccoli plenty of times but never actually seen the broccoli plant, and others who didn’t know there was such a thing as golden beets.”

Finally, at the end of the event, the bags of actual trash that were sent to the landfill were weighed. There was less than 10 pounds of trash. The JCC facilities team said that the event’s waste sorting was some of the highest quality that they’d ever seen at an event held at the JCC (rental or in house program).

Here’s a link to the full album of pictures for the event.

I've been writing things since grammar school, and served as a writer, photographer and/or an editor on my junior high and high school newspapers; the Daily Trojan at USC (where I earned my journalism degree); the student newspaper at the Anderson School at UCLA (where I earned my MBA); and written and edited countless business documents and presentations in the ensuing twenty years. I've been involved Jewishly since my bris and in Boulder since 1995. I'm married to my Executive Director Cheryl, and we have two children, Lauren and Ethan.
Previous JEWISHcolorado Does Good on Good Deeds Day
Next Beth Ami’s Community Passover Seder Set for 2019