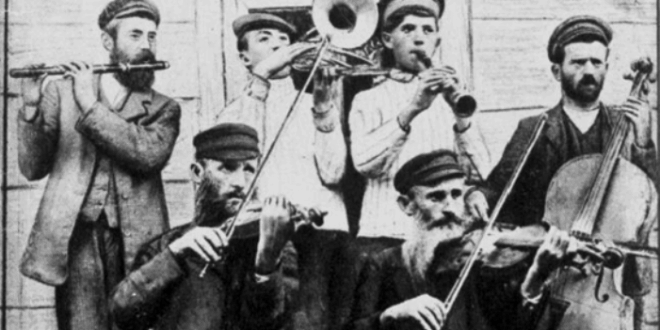 Kathryn Bernheimer December 19, 2018 Arts & Culture Comments Off on Klezmer Rose From The Ashes Of The Holocaust To Symbolize Jewish Resilience

Klezmer is the traditional instrumental music of Eastern and Central Europe’s Ashkenazic Jews, who were obliterated by the Holocaust, which has given the revival of Klezmer much of its contemporary urgency and relevance.

Klezmer can trace its origins back to the 9th century in the Rhine valley, where the Yiddish language also developed. As Jews moved to Eastern Europe, their celebratory music influenced that of the local cultures. In Belarus, Lithuania, Russia, Ukraine and Poland, 19th century Polish-Russian klezmorim (esteemed klezmer musicians) who had been in Czarist military bands brought brass and woodwind instruments into what had primarily been string-based ensembles. Judaism’s ultra-orthodox Chasidic movement of the 18th and 19th centuries emphasized passionate singing and dancing while in the act of worship and bound klezmer music inextricably to Jewish festivals and joyous observances. What connects Klezmer with Gypsy music?

In present day Romania there was a definite cross-pollination between Klezmer and Roma music. And in Moldova (once Bessarabia), klezmer musicians started using Turkish scales already familiar from synagogue observances. Like Romani music, Klezmer is everywhere, influencing and being influenced by almost every musical style. Both Romani music and Klezmer have long been truly global forms of music.

How was Klezmer revived?

Today, musicians who play klezmer are not only embracing one of the world’s most inspiring bittersweet musical styles, but are rebuilding lost Jewish culture. Though an estimated 90% of klezmorim died in the Holocaust, those who survived passed on their knowledge to the next generation. From World War II Jews focused less on klezmer and its Yiddish language than on building a Hebrew speaking state of Israel, but beginning in the ’70s, American and Western European Jews rediscovered their Eastern European roots and set out to revive both.

Today there are klezmer bands everywhere–check out Klezmershack.com’s inspirational listing of klezmer bands worldwide by location. The most accomplished Klezmer ensembles, such as the American Klezmatics, actively expand the music to include other global styles. For example, Frank London, a former trumpeter for the Klezmatics, actively connects klezmer with Balkan brass.

Ironically, klezmer has become a “hip” form of music in countries that were hostile to the point of genocide a few generations ago. For example, Poland’s huge Krakow Jewish Music Festival celebrates the country’s vanished Jewish culture.

Kathryn has spent her professional life writing about, teaching, and presenting the arts. Founding Director of the Boulder Jewish Film Festival, Kathryn was Director of Menorah and ACE at the Boulder JCC from 2003 through August, 2019. The former film and theater critic for the Boulder Daily Camera, Kathryn is the author of "The Fifty Greatest Jewish Movies" and "The Fifty Funniest Films of All Time." kathryn.bernheimer@gmail.com
Previous Bowling and Chinese on Dec 25, a New Tradition?
Next Weekly Edition: December 21st, 2018