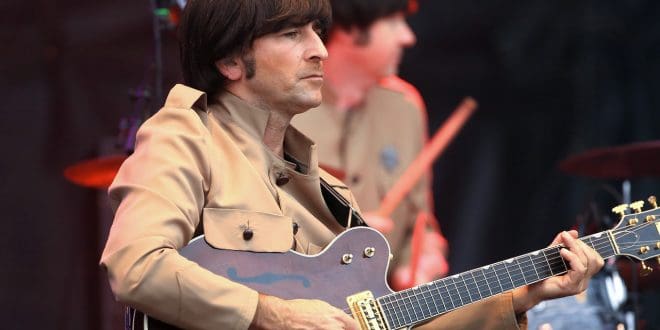 BOULDER, CO (12/12/18) The two greatest rock ‘n’ roll bands of all time face off as the Boulder Theater hosts Beatles vs. Stones – A Musical Showdown on January 23. Taking the side of the Fab Four is Abbey Road, one of the country’s top Beatles tribute bands. They engage in a musical “showdown” of the hits against premier Stones tribute band Satisfaction – The International Rolling Stones Show.

“In the tribute world, somebody figured out that there’s a synergy with using two bands instead of one,” said Zak Schaffer, a Los Angeles-based Jewish musician who plays George Harrison in the performance.

The debate about which British Invasion band is superior has been going on for decades. Not surprisingly, Schaffer is on the Beatles side of the fence.

“I heard “Roll Over Beethoven” at the age of eight and I’ve been a die-hard Beatles fan ever since.”

“Each of the Beatles has their own funny little energy. Paul has that can’t-keep-a-smile-off-his-face thing, and John had these zoning out vibes, but George’s more sedate energy suits me.”

In the Beatles vs. Stones show, the bands trade off three 20-minute sets before coming together on stage for an encore mash up. Each mini set is complete with costume changes representing the different eras of the bands’ careers.

And here is some additional information about Zak Schaffer: Zak has been a fixture on the Los Angeles scene for over a decade as a multi-instrumentalist. The University of California, Berkeley graduate has toured with Pete Yorn and Minnie Driver.

Last year, he recorded his second album, Part of Your Collection, playing every note on the album.

They call me "NewsHound IV," because I'm a clever Finnegan, sniffing out stories all over the Boulder area. I love Jewish holidays because the food is GREAT, especially the brisket. Well all the food. I was a rescue pup and glad to be on the scent!
Previous Rabbi Marc’s A Dash of Drash – Encounter – Episode 83
Next Baruch Dayan HaEmet – Frederick Levine z”l