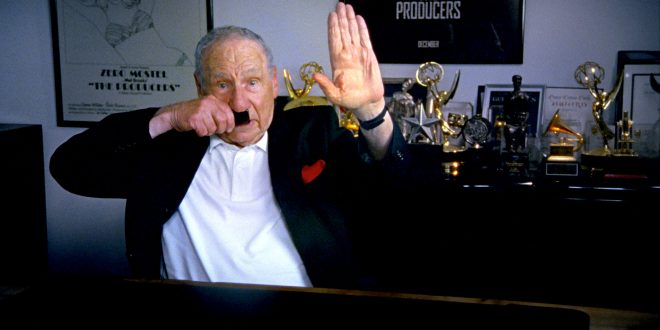 Mel Brooks proved that no topic was immune to humor.

My predilection for jokes certainly can be traced to my mother, who had a joke for every occasion, always made unintentionally funnier by her German accent.

My career as a Jewish joke collector, which I will share at the upcoming ACE Lunch and Learn on October 3, began when I was in my early 30s, about the same time that I “rediscovered” a Judaism I had never known. My subsequent quest for greater understanding of Jewish identity led in many directions, and my curiosity has not abated more than three decades later.

Having been brought up by German Holocaust survivors, the child of secular and assimilated but proudly Jewish parents, I had a heightened sense of Jewish self-awareness, but no religious education at all. As an adult taking my place in the Jewish community by choice, I set about “studying” the question of what it means to be Jewish, always looking sidelong in a mirror.

I began to ask questions. What do Jews think of themselves? What do other people think of Jews? How do we represent ourselves through the arts and entertainment, and how do others represent us?

I found an explosion of answers in popular culture, which remains the primary focus of my lifelong curiosity – and a continual source of pleasure – with cinema at the center of my passion for cultural arts.

In fact, because I unearthed so much invaluable information about Jewish identity in the films I examined, I published “The 50 Greatest Jewish Movies” in 1998.

Jewish humor, I discovered along the way, is just as revealing as film, providing plenty of clues to the mystery of Jewish identity. What do Jews find funny? What common Jewish themes and attitudes are projected through comedy? Who do we make fun of and why? What purpose does humor serve for a people, especially an historically persecuted people?

The Jewish joke is a treasure trove of insights, each gem sparkling with wit and wisdom. The joke is concise, and when delivered with a modicum of skill, is an art form. Although stand-up comics today rarely tell jokes, all the early stand-up comics wrote, sold, and bought jokes. The kind of jokes that get passed around at parties are mostly of unknown origin, but have stood the test of time. My first source of jokes was the exhaustive compendium compiled in 1985 by William Novak and Rabbi Moshe Waldoks, “The Big Book of Jewish Humor.” In 1995, I had the pleasure of spending a week with Rabbi Waldoks at a Jewish Renewal Retreat (Kallah) in Fort Collins, where he led a number of workshops focusing on humor. Also around this time, Rabbi Joseph Telushkin published “Jewish Humor: What the Best Jewish Jokes Say about the Jews.” I also had the pleasure of spending time with Rabbi Telushkin when he lived in Boulder with his family in the mid-‘90s. In his book, Telushkin points out how jokes serve as social commentary and offer profound psychological observation, which further sparked my interest in the implications of Jewish humor – and expanded my collection of personal favorites.

Many scholars have attempted to explain the strong relationship between Jews and humor. Do the traditions of logic and argumentation play a role? Are Jews more prone to verbal aggression? Is there such a thing as a Jewish sensibility, one that naturally lends itself to sarcasm?

Jokes tell a story about the person telling the joke, and the people to whom the joke is being told. A bond is formed between the teller and listener, who share a laugh based on mutually understood assumptions. Many Jewish “inside” jokes center on chosenness, otherness, exceptionalism, alienation, and loss. Jokes also have historical value, and humor is often very specific to time, place and cultural norms.

Topics naturally include assimilation, anti-Semitism, family dynamics, Jewish intelligence, money, materialism, chutzpah, and its flip-side, self-denigration. The anxieties and fears of a minority culture are clearly visible in these jokes, which also function as a form of revenge, or at least as a defense against a hostile world. Humor, it has been argued, is just an elaborate coping mechanism.

Produced in 1990, “The World of Jewish Humor” remains the best documentary describing the significance of 20th century comedy. I still remember some of the jokes – and which famous Jewish personality told them. (I will share Ms. Magazine’s founding editor Lottie Pogrebin’s “definitive” Jewish joke, set in synagogue on Yom Kippur.) Over the years, I also picked up jokes from Jackie Mason, Woody Allen, Mel Brooks and many others. I find that, like my mother, I always have a joke in my back pocket. My husband and I use punch lines of our favorite Jewish jokes as code. (“Taste the soup!” comes up often.)

Join ACE as I share my treasured joke collection for the first time – and reflect on humor as an expression of the Jewish experience – at our “Laugh and Learn” on Wednesday, October 3, at noon.

Kathryn has spent her professional life writing about, teaching, and presenting the arts. Founding Director of the Boulder Jewish Film Festival, Kathryn was Director of Menorah and ACE at the Boulder JCC from 2003 through August, 2019. The former film and theater critic for the Boulder Daily Camera, Kathryn is the author of "The Fifty Greatest Jewish Movies" and "The Fifty Funniest Films of All Time." kathryn.bernheimer@gmail.com
Previous Baruch Dayan HaEmet – Aviva Marilyn Robinson z”l
Next Boulder Rabbi to Play God … Added Performance This Weekend