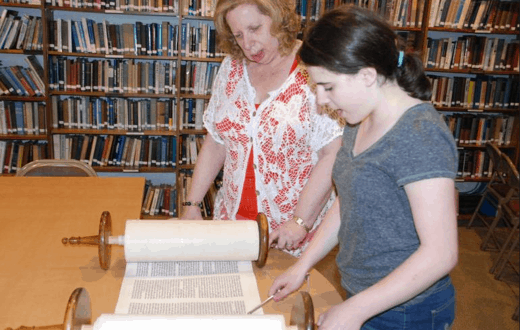 Esther Benari-Altmann currently serves as Education Director at Temple Anshe Amunim, a Reform Jewish synagogue located in Pittsfield, Massachusetts. Esther has overseen the significant growth of the Religious Education program and the redevelopment of the Adult Education programming there. Rabbi Joshua Breindel, the rabbi at Temple Anshe Amunim, says about Esther: Esther Benari-Altmann is one of the finest educators whom I have ever encountered. She is unmatched in inspiring a love of yiddishkeit within her students.

The Reform synagogue is a sister congregation to the Conservative synagogue, Knesset Israel, located just down the street from Anshe Amunim. As Education Director at Anshe, Esther has led the CHAI program (Community Hebrew Afterschool Initiative), which is a shared Hebrew school program between the two congregations. She has also taught at the Knesset Israel Shabbat morning Hebrew School program for several years, focusing primarily on younger students’ Hebrew studies. In addition, she has organized adult and teen classes for continuing Hebrew education and led special programming for religious school families.

In 2015, Esther was honored for her hard work with the Harold Grinspoon Foundation’s Excellence in Education award, an honor bestowed to only a small number of Jewish educators in New England.

Previously, the interim Head of School and Judaic Studies Coordinator of the former Sinai Academy Jewish Day School in Pittsfield (where she served for two years), Esther boasts nearly two decades of experience in Jewish education, including as Principal of Supplementary and Day Schools in Eastern and Western Canada.

Prior to her career as an educator, Esther, an Israeli native, worked as a criminal attorney, including a stint as Chief Prosecutor in the Haifa Police JudicialDepartment.

Esther will be moving to Boulder from Massachusetts around the beginning of June. She will start as Bonai Shalom’s Education Director shortly afterward, in preparation for the 2018/2019 school year.

Bonai Shalom is grateful for the leadership of Karen Raizen who is retiring at the end of this school year.  We truly appreciate all of Karen’s contributions to Bonai Shalom. She has propelled our educational community to new heights and has inspired our students and teachers. We thank her deeply for over five years of dedicated service to our religious school and educational programming.

I am the Office Administrator at Congregation Bonai Shalom.
Previous New Study Outlines Unprecedented Financial Risk To Many Nonprofits
Next BJFF: Vote for Your Favorites and Photos from Closing