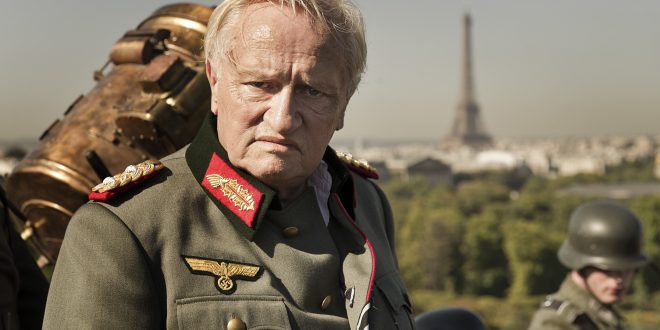 Triumphs Amid Tragedy in Two Films

The waning days of World War II come into focus in two feature films being presented at the Boulder JCC this week, both based on historical events vividly re-imagined by their directors.

In “Diplomacy” (2014), the famed German director Volker Schlondorff, working from a noted stage play, pulls the curtains back on a story largely ignored since 1966’s “Paris is Burning,” which revealed how close Paris was to total destruction even as Allied troops approached the City of Lights. Bridges and monuments — the Opera, the Eiffel Tower, the Louvre — were to be blown up, erasing centuries of art, architecture and civilization. Hitler, infuriated by the bombing of Dresden, set in place a series of bombs, and left one trusted general behind to conduct the operation. So why is the Arc de Triumph still standing?

This thrilling, brilliantly acted two-man standoff, which premiered at Telluride Film Festival, explores the circumstances around the plan’s failure, a desperate, last-minute act of diplomacy, and the triumph of human decency. Desperation also fuels an act of sabotage, also involving explosives, in 2001’s “The Grey Zone,” set in Auschwitz as a group of Sonderkommandos (forced to perform the actual killing of fellow Jews) plots to blow up a crematorium. Based on the same incident as “Son of Saul” – the single most successful revolt in the camps – this harrowing and realistic drama details an act of stunning bravery.

Directed and scripted by Jewish American actor Tim Blake Nelson (who co-starred with George Clooney and John Turturro in the Coen Brothers’ “Oh Brother, Where Art Thou?”), “The Grey Zone” is among the very best Holocaust films, yet largely under-appreciated. By focusing on an act of defiance, the film is charged with suspense. There are no happy endings in the Holocaust, but in this powerful drama there is a sense of satisfaction afforded by the story’s heroism.

Superbly acted by David Arquette, Steve Buscemi, Harvey Keitel and Mira Sorvino, “The Grey Zone” shares another critical plot point with “Son of Saul,” in which  a child miraculously survives the gas chamber. Here, however, this discovery lands the characters squarely in a moral grey zone.

To view the trailer for “The Grey Zone,” CLICK HERE .

Kathryn has spent her professional life writing about, teaching, and presenting the arts. Founding Director of the Boulder Jewish Film Festival, Kathryn was Director of Menorah and ACE at the Boulder JCC from 2003 through August, 2019. The former film and theater critic for the Boulder Daily Camera, Kathryn is the author of "The Fifty Greatest Jewish Movies" and "The Fifty Funniest Films of All Time." kathryn.bernheimer@gmail.com
Previous Hatred and Home Runs in the Shadow of War
Next Weekly Edition: April 28th, 2017