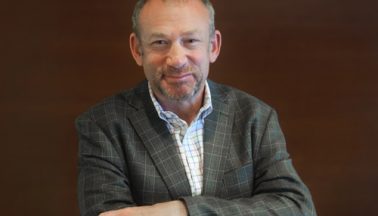 Staff July 9, 2017 News Comments Off on Seserman to Leave JEWISHcolorado for AABGU

NEW YORK…July 7, 2017 —  Doug Seserman, who for 15 years has been president and chief executive officer of JEWISHcolorado, will become chief executive officer of American Associates, Ben-Gurion University of the Negev (AABGU). The national organization is based in Manhattan and has nine regional offices around the country. Seserman will assume his new position in October.

He replaces Doron Krakow who left this position in March to become president and chief executive officer of the JCC Association of North America.

“Doug is a creative, passionate Jewish community leader, an award-winning private sector marketing executive, an out-of-the-box thinker, an avid Zionist, and a mensch. Building on AABGU’s strong foundation, Doug has the skills to take AABGU to the next level. I look forward to working with him.”

Seserman is known for his creative business vision. Just last month he received national recognition by the American Business Awards, winning the 2017 Gold Stevie Nonprofit Executive of the Year award. In 2014, he was named to the Forward 50 as one of the 50 most impactful American Jews for his success and accomplishments reimagining federation for the 21st century. He orchestrated the merger of the Allied Jewish Federation and Jewish Community Foundation of Colorado, and launched the JEWISHcolorado brand to broaden the appeal and relevance for the next generation of donors.

Seserman achieved record fundraising at the Colorado federation. During his tenure, he raised more than $200 million and almost tripled the organization’s endowment and planned giving assets. He also worked to create strong bipartisan support in the state legislature, paving the way for Colorado as the fourth state to sign an anti-BDS law in 2016. The new law prohibits Colorado’s largest state pension fund from investing in companies that boycott, divest or sanction (BDS) Israel.

Diana Zeff Anderson, chair of JEWISHcolorado’s board issued this statement:

“We are extremely grateful for Doug’s exemplary service and commitment to JEWISHcolorado, as well as the greater Jewish community, over the last 15 years.  He is the second longest tenured CEO in our organizations’ history, second only to Nat Rosenberg who helped found the organization in 1946 and served until the early 1970’s.  Doug has been a courageous and visionary leader.  He spearheaded several leading-edge, strategic initiatives including Total Choice Tzedakah (TCT) and “Reimagining Federation for the 21st Century.”

Through JEWISHcolorado’s partnership with Ramat HaNegev, Seserman became familiar with Ben Gurion University, who maintains several facilities in the region.

“I’m honored by the opportunity to become the professional leader of AABGU. I’m also humbled by the responsibility to sustain David Ben-Gurion’s dream to develop the Negev. In my opinion, Ben-Gurion University is one of the most vital institutions to Israel’s future,” said Seserman.

Seserman’s strengths in leadership, marketing and branding are the culmination of an exemplary career in telecommunications and consumer products marketing, prior to entering the Jewish nonprofit arena.

As senior vice president, marketing and sales at AT&T Broadband, he oversaw marketing for AT&T’s $10 billion portfolio of cable television, high-speed internet access and cable telephone product offerings. Prior to that, at TCI, he launched the country’s first digital cable television product, TCI Digital Cable, before the company was acquired by AT&T.

From 1986 to 1996, Seserman served in executive positions at The Quaker Oats Company in Europe and in the United States, advancing from his first job as marketing assistant in the Pet Foods Division to European brand equity director in only a decade.

Among his volunteer activities, he was a member of the Jewish Agency for Israel board of governors from 2005 to 2016, and currently serves on the executive committee of Jewish Federations of North America as chair of the Large Intermediate Federation City Size Group.

Seserman received an M.B.A. from J.L. Kellogg Graduate School of Management, Northwestern University (NU) in 1986 and a B.S in communication studies in 1985 from NU.

He currently lives in Denver with his wife, Sue, and will be relocating to New York. They have twin young adult daughters. Doug is an outdoor sports enthusiast, particularly enjoying skiing and cycling.

About JEWISHcolorado
JEWISHcolorado, founded in 1946 and formerly known as Allied Jewish Federation of Colorado, is the umbrella community organization focused on building and sustaining Jewish life in Colorado, Israel and around the world. Its mission is to secure, steward, and share philanthropic and human resources in support of vibrant Jewish life as well as to mobilize the community in times of need. JEWISHcolorado is a member of the Jewish Federations of North America, which is among the top ten charities on the continent. JEWISHcolorado raises and distributes funds in support of a wide variety of programs and partner organizations both locally and globally. In 2016, JEWISHcolorado’s total financial resource development was $22.4 million. Its Endowment and Planned Giving arm houses more than $62 million in long-term assets for individuals, agencies and synagogues in the community. For more information, visit www.JEWISHcolorado.org or Facebook, Twitter, or LinkedIn.

They call me "NewsHound IV," because I'm a clever Finnegan, sniffing out stories all over the Boulder area. I love Jewish holidays because the food is GREAT, especially the brisket. Well all the food. I was a rescue pup and glad to be on the scent!
Previous Movie Night at Har HaShem Thursday
Next Weekly Edition: July 14th, 2017