Jewish Family Service of Colorado (JFS) welcomes Naismith Memorial Basketball Hall of Famers Bill Walton and Bob Lanier for its 13th annual JFS Executive Luncheon fundraiser on Friday, April 28. Local sports broadcaster Jerry Schemmel will serve as emcee. The luncheon will be held at the Hyatt Regency Denver at Colorado Convention Center, 650 15th Street, from noon to 1:15 pm. Sponsorship packages start at $2,000 and are available now. Tickets will go on sale March 27 at www.jewishfamilyservice.org/luncheon. For more information or for sponsorships, contact Lisa Benoit at 720.248.4633 or lbenoit@jewishfamilyservice.org.

All proceeds from the event will help support all programs of JFS, including mental health counseling, senior and adult in-home care, disability and employment services, and family safety net services. Founded in Denver in 1872, JFS is a nonprofit community agency serving people regardless of age, race, faith, or income. 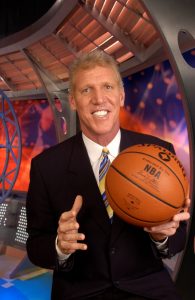 Bill Walton is passionate—about his work, his family and friends, music, life, and greatness. His legendary basketball career and years as a successful sportscaster have made him among the most recognizable figures in sports.

Walton has been a basketball icon since high school. At UCLA, Walton was a member of two NCAA championship teams compiling an NCAA record 88-consecutive-game winning streak. He was named NCAA Player of the Year in 1972, ’73, and ’74.

Walton went on to have a Hall of Fame NBA career. He was the number-one pick in the 1974 NBA Draft by the Portland Trailblazers and was a member of their championship team in 1977. Nine years later, he earned another championship title, this time with the Boston Celtics. He retired in 1988.

Walton received every award and accolade given in the sport of basketball. In 1993, he was inducted into the Basketball Hall of Fame. In 1997, he was selected as one of the NBA’s 50 Greatest Players of All Time.

Walton’s extraordinary basketball career came with a price. He is the most injured player in NBA history and has endured 37 surgeries. In 2008 he suffered a catastrophic spinal collapse that left him unable to move for three years. With extraordinary determination, and sacrifice—and pioneering surgery—he recovered.

After retiring from basketball, Walton went into broadcasting, working for CBS Sports and NBC. In 2001 he won an Emmy for Best Live Sports Television Broadcast. In 2009, Walton was named one of the top 50 sports broadcasters of all time by the American Sportscasters Association.

A devoted fan of the Grateful Dead, he has followed the band for decades. He authored Back from the Dead (2016) and Nothing But Net (1995). Walton is active with many organizations and charities in his hometown of San Diego and nationally. 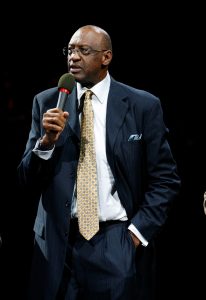 Bob Lanier is a legend both on and off the court. He is known for his 6’11” stature, size 22 shoes, and mastery of basketball.

When Lanier was cut from his high school basketball team, he joined a Boys Club team and gave it his all. A year later, he was All City; two years later he was All-Western New York State, leading his team to successive city titles.

He captured the attention of more than 100 college teams and settled on St. Bonaventure University. He led the team to a 22-0 regular season record and a No. 3 national ranking in only his sophomore year. In his last year in college, he suffered a knee injury that took the team from a sure spot in the NCAA Championship game to an upset in the final against Villanova.

Despite his injury, the Detroit Pistons claimed Lanier with the first overall pick in the 1970 NBA Draft. He played nine-plus seasons in Detroit and is the Piston’s all-time leader in scoring average, ranks second in rebounds, and third in points. He was traded to the Milwaukee Bucks in 1980 and played for four more seasons. During his NBA career, Lanier amassed 19,248 points in 14 years, finishing with averages of 20.1 points and 10.1 rebounds per game. Lanier was inducted into the Basketball Hall of Fame in 1992.

He became a successful businessman and philanthropist. He was involved in the launching of the NBA’s Stay in School program that encourages students to complete high school. He has visited hundreds of schools delivering inspirational messages to at-risk kids. As an NBA Cares Ambassador, he routinely works with youth programs that support education, health, and family.

Lanier co-authored a children’s book series entitled Hey L’il D! that promotes a positive attitude for children in the face of life’s challenges, as well as the value of education.

About Jewish Family Service of Colorado
Jewish Family Service of Colorado (JFS) believes in strengthening the community by providing vital services to people in need.  Every day, JFS helps people overcome life’s challenges to live fuller, more meaningful lives.  Founded in 1872, JFS is a nonsectarian, nonprofit human services agency serving metro Denver and Boulder. JFS helps seniors live independently at home, provides quality mental health counseling, offers training and job placement to those with developmental disabilities and other barriers to employment, and provides food and financial aid to people in crisis. Every year, the agency benefits 24,000 people of all ages, faiths, incomes, and abilities. For more information, call 303.597.5000 or visit www.jewishfamilyservice.org. Follow us on Facebook, Instagram, and Twitter!