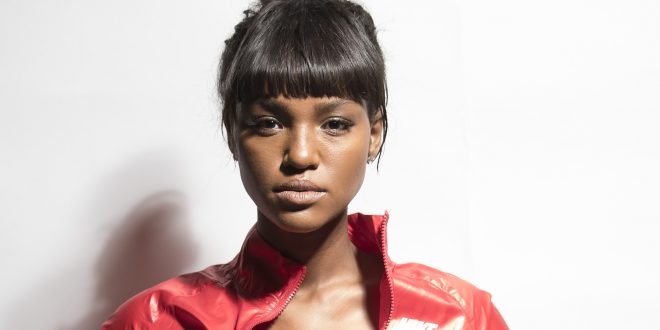 (New York, N.Y.; October 23, 2017)—Jewish National Fund (JNF) and Media Watch International are bringing former Miss Israel Titi Aynaw to the U.S. for a speaking tour at college campuses across the U.S. During her fall 2017 tour, Aynaw will visit campuses in New York, Colorado, California, Washington State, and Oregon culminating in a keynote address before hundreds of college students at JNF’s National Conference in South Florida on Saturday, November 11. Titi’s stop at CU Boulder is on Tuesday, October 31.  A top Israeli model, television personality, and advocate for Israel, Aynaw became the first Israeli-Ethiopian to win the Miss Israel title, opening the door for other models of Ethiopian heritage and causing advertisers to reassess their attitudes towards black models.

“I am a proud Ethiopian-Israeli woman and I am excited to go back to campus as I’ve been waiting all summer for my speaking tour to begin,” remarks Aynaw. “My previous two tours to the U. S. were on the East Coast, so I am very happy to share my personal story with the West Coast this month and I invite college students of all backgrounds to come to these events.”

Aynaw is speaking to students and community members on the following campuses:

“Jewish National Fund is thrilled to bring Titi Aynaw to the West Coast for a two-week campus tour,” says Nelson France, JNF’s director of campus and high school affairs. “With her experience and Positively Israel message, Titihas been breaking glass ceilings since she burst on the scene in 2013 and her immigration story hopes to unite diverse communities with her themes of home and family.”

Prior to participating in Miss Israel 2013, Aynaw had never modeled previously and was unknowingly entered into the beauty competition by a high school friend. The win brought pride to the Ethiopian community and she is considered one of their leading role models and spokespeople.

“Titi Aynaw and her visits to various U.S. campuses highlight the diverse ethnic and cultural makeup of Israel,” says Founder and Executive Director of Media Watch International Sharon Tzur. “As an Ethiopian, African, Israeli, and Jewish individual, she is able to use her experience and influence to promote a message of tolerance and coexistence among the many groups that call Israel home, and translates this message to a global audience.”

Aynaw has a successful modeling career working on leading campaigns in Israel, Europe, and the United States. In 2013, President Barack Obama personally invited her to attend a state dinner at the late Israeli President Shimon Peres’s residence, during his first presidential visit to Israel. Aynaw has traveled extensively to share her extraordinary life story with Jewish, non-Jewish, and African-American audiences. Born in the Gondar province of Ethiopia, Aynaw always dreamed of immigrating to Israel. Her father passed away when she was a toddler, and she was 12 when she lost her mother to a longtime illness. Aynaw and her brother moved to Israel soon after and lived with their grandparents in Netanya. She served in the Israel Defense Forces as Company Commander with the rank of Lieutenant. After completing her officer’s training, Aynaw joined the Military Police and had up to 300 men and women under her command. She recently founded the “Titi Project,” which provides extracurricular activities and enrichment to 66 Ethiopian children from disadvantaged backgrounds in Netanya. She hopes to expand the project in order to give more children educational opportunities that she lacked growing-up. She is currently on a leave of absence from the IDC University in Hertzliyah where she studies international relations.

“Campus events are being coordinated by our talented Jewish National Fund Campus Fellows and participants of JNF’s Caravan for Democracy Student Leadership Mission to Israel,” says France. “The world needs to know that Titi Aynaw is more than a beauty queen and fashion model, she is making a real difference on college campuses by inspiring students to connect to Israel through her own life story.”

This is the third time Aynaw is participating in a U.S. college campus tour sponsored by JNF and Media Watch International to drive constructive dialogue and discuss the issues affecting Israel, how it is covered in the media, and its unique role as the only democracy in the Middle East. The tour is also part of JNF’s Positively Israel campaign, which seeks to promote a positive dialogue about Israel and the ways it makes the world a better place. During the fall 2016 tour, she visited seven campuses, attended 20 events and spoke before 500 students. This past spring, Aynaw spoke to some 800 students on 13 campuses and attended 36 events. On the current tour she is expected to attend 28 events, visit 12 campuses and address more than a thousand college students.

Jewish National Fund (JNF) began in 1901 as a dream and vision to reestablish a homeland in Israel for Jewish people everywhere. Jews the world over collected coins in iconic JNF Blue Boxes, purchasing land and planting trees until ultimately, their dream of a Jewish homeland was a reality. JNF gives all generations of Jews a unique voice in building a prosperous future for the land of Israel and its people. JNF embodies both heart and action; our work is varied in scope but singular in benefit. We strive to bring an enhanced quality of life to all of Israel’s residents, and translate these advancements to the world beyond. JNF is greening the desert with millions of trees, building thousands of parks, creating new communities and cities for generations of Israelis to call home, bolstering Israel’s water supply, helping develop innovative arid-agriculture techniques, and educating both young and old about the founding and importance of Israel and Zionism. JNF is a registered 501(c)(3) organization and United Nations NGO, which continuously earns top ratings from charity overseers. For more information on JNF, call 800.JNF.0099 or visit jnf.org. Find Jewish National Fund on Facebook, Twitter, and Instagram. They call me "NewsHound IV," because I'm a clever Finnegan, sniffing out stories all over the Boulder area. I love Jewish holidays because the food is GREAT, especially the brisket. Well all the food. I was a rescue pup and glad to be on the scent!
Previous Giving PTSD the Jewish Treatment, Not Just Matzo Ball Soup
Next Hadassah’s December Program Is “Our Heritage and Our Health”