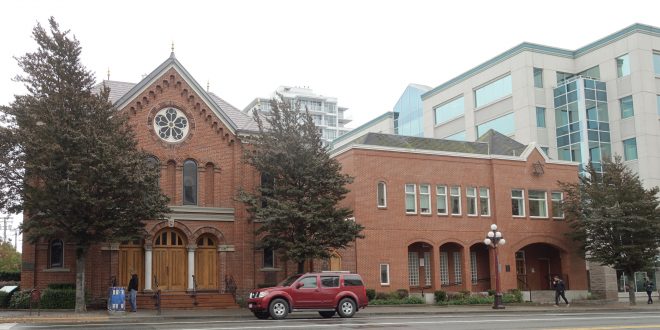 I took a second look when my Google search for “Jews in Victoria, British Columbia” included links to Canada’s oldest synagogue in continuous use—Congregation Emanu-el. This synagogue was built in 1863, modernized in 1948, restored in 1982, and an annex building was added in 2003. Today, it’s one of Victoria’s historical treasures and the oldest synagogue building on the West Coast of North America.

While I admit that my background knowledge of Canadian Jewry is minimal, I would have anticipated that such a noteworthy synagogue would be in Montreal or possibly Toronto. Yes, there is an older congregation in Montreal, but its current building isn’t in its original location.

Several months ago, I visited Vancouver Island for an extended weekend. Even though my initial intention was to enjoy the capitol city and to explore the southern part of the island, I was curious to find out more about Victoria’s Jewish community.

I contacted Shoshana Litman, Canada’s first ordained Maggidah (Jewish storyteller and educator) and arranged for a private historical tour. It was an overcast day with intermittent rain so I didn’t mind spending a couple of hours inside Congregational Emanu-el.

Due to a schedule conflict, I was unable to participate in Gary Cohen’s 90-minute walking tour. To gain a better appreciation of the original movers and shakers, I purchased the pamphlet, In the Footsteps of Jewish Victoria: 1858-2011 (Jewish Museum & Archives of British Columbia). Unfortunately, I didn’t have time to take a self-guided tour of the highlighted buildings. The booklet has a map with 16 landmarks.

With cars driving along Blanshard Street, it was hard to imagine the first Jewish settlers’ lifestyle. As I approached Pandora Avenue, I gazed at the brick Romanesque Revival style synagogue. It seemed a bit out of place. My instincts were correct. This architectural style is a rarity in Canada.

Shoshana was at the entrance to the synagogue. I followed her to the back of the sanctuary where I took a seat. As she retold the story of the community, she pointed to various items in glass-enclosed display cases. As Shoshana’s shpiel evolved, she effectively combined secular and Jewish history.

Fort Victoria was established as a British military station and trading post. Jews began settling in Fort Victoria, on the southeastern tip of Vancouver Island, in the middle of the nineteenth century. A small number arrived after the 1858 gold discoveries along the Fraser River while others came for the Pacific Northwest fur trade industry. Victoria quickly became a major port, commercial center, and “the place” to buy supplies before going off into the countryside. More and more European Jewish immigrants were attracted to the business opportunities.

Like many of their fellow Jews in the western regions of the United States, these Jews became successful merchants who serviced the 30,000+ people who flocked to Vancouver Island in search of gold. The San Francisco Jewish merchants who had prospered during the 1848 California gold rush had excellent timing. Some of these families used their expertise and expanded their businesses by sending relatives to Vancouver Island to start satellite companies.

Shoshana proudly talked about the early Jewish settlers’ acceptance into the upper echelons of Victoria’s social circles. These pioneer Jewish families contributed to a variety of civic organizations and were founding members of the Odd Fellows and Masonic Lodges.

Leading the parade to the synagogue’s cornerstone ceremony in 1863 was the band of the Royal Navy’s HMS Topaze. Non-Jewish participants and contributors included a variety of secular institutions and the general public. Two cornerstones were laid—one Jewish and one by the Freemasons.

Like their American counterparts, these Jews met in private homes before they secured land and funds to build the first synagogue. The Hebrew Victoria Benevolent Society and Hebrew Ladies Benevolent Society became the backbone of the community. The former organization bought land for a Jewish cemetery (1860) and organized the building of the first synagogue. The ladies organization eventually took the lead in running a Hebrew school, overseeing the cemetery and organizing fundraising events that provided necessary funds for community services.

The cemetery is located at Fern Hill Road and Cedar Hill Road. It is the oldest Jewish cemetery in Western Canada. If you visit the cemetery, look for the Holocaust memorial that is located near the entrance.

Shoshana enhanced her presentation by talking about some of the notable 19th century Jewish personalities. Some of their photos and artifacts were showcased in one of the display cases and are also chronicled In the Footsteps of Jewish Victoria: 1858-2011.

By the first half of the twentieth century, Victoria’s Jewish population had decreased substantially. As the numbers dwindled in the 1940s to just a handful, the members continued to offer services and chose to lower the building’s maintenance costs by modernizing the building. The windows were covered with stucco and a false ceiling eliminated the expansive vaulted ceiling.

As the Jewish population started to rise in the 1960s and 1970s, the public backed an effort to restore the synagogue to its original glory. Today, visitors can admire the 19th century Romanesque architecture and the rounded arch forms, rose windows, and corbelled brickwork as well as the community’s perseverance to keep Judaism alive in Victoria.

For more information about Victoria, British Columbia, follow this link to my Fareportal article—72 Wild Hours in Victoria

Sandy Bornstein lived as an expat in India. Her award-winning memoir, May This Be the Best Year of Your Life, highlights what she learned as the only American teacher at an international Bangalore school. After living abroad, Sandy continues to explore the world and write about her travels. You can follow Sandy's adventures at www.sandrabornstein.com.
Previous 1492: Columbus, the Jews, and the Messiah in Spain
Next Letter: Boulder JCC Receives New Bomb Threat 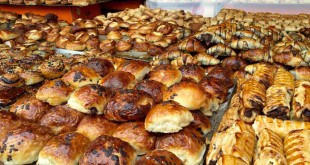