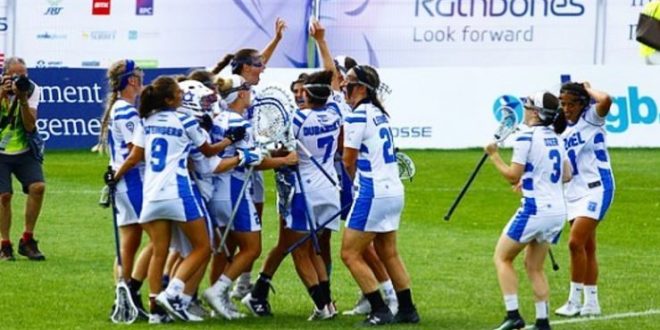 SURREY, ENGLAND — The Israel women’s national team has a flair for the dramatic in 2017, securing their second overtime victory of the FIL Women’s World Cup and climbing into the top-six in the world rankings with an 8-7 win over Wales at Surrey Sports Park on Thursday.

Alison “clutch” Curwin again scored the game-tying and game-winning goals in overtime, just as she did earlier in the week in a first-round playoff game against Japan, shocking the mostly pro-Wales crowd.

The victory secures a likely promotion to the top division for the Israelis; short of a dramatic change to the tournament format, the blue-and-white will control their own destiny as the women hope to secure their first medal on the world stage in 2021.

Thursday’s match was an exciting back-and-forth affair, with no team leading by more than two goals at any point in the contest.

Wales led 6-5 with under two minutes to play before Ali Steinberg tied the match to force overtime. Wales’ Iona Dryden struck first in the first overtime, before Curwin answered back with 47 seconds left to force sudden-death.

The third period proved fruitless for both teams, but Curwin again scored on a feed from Sarah Andersen with 58 seconds left to secure the win.

They call me "NewsHound IV," because I'm a clever Finnegan, sniffing out stories all over the Boulder area. I love Jewish holidays because the food is GREAT, especially the brisket. Well all the food. I was a rescue pup and glad to be on the scent!
Previous Har HaShem Campers Deliver Challahs to JFS Clients
Next Norm Brownstein to Receive Robert E. Loup Hineni Award at 2017 Staenberg-Loup JCC Annual Dinner

Hello Forest Fans, Happy Valentine's Day! Here are a few quick links about exciting events that are coming up for your involvement.