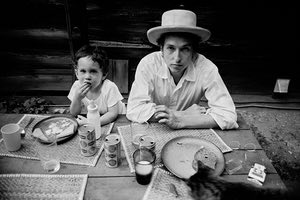 Dylan Tribute Draws and Wows a Crowd on Father’s Day

Some of the area’s most talented musicians came together in song at “Forever Young: A Bob Dylan Tribute Concert” at the Boulder JCC Sunday night. A crowd of 160 gathered in Levin Hall to hear some celebrated Dylan masterpieces, as well as lesser-known classics.

Rabbi Joe Black, who performs nationally, put heart and soul into “I Shall Be Released,” a song with a literal meaning – released from prison – and a metaphorical meaning, the escape from bondage of any kind. (Do we detect a Jewish reference here?) The senior Rabbi of Temple Emanuel in Denver, Black performed Dylan’s definitive break-up song, “Don’t Think Twice it’s Aright,” noting it is the angriest song he knows.

Two Denver performers with deep roots in the folk scene, Carla Sciaky and Harry Tuft sang two songs each. Sciaky, an award-winning and wide-touring multi-instrumentalist-folksinger-songwriter, commanded full attention as she sang her renditions of “Tomorrow Is a Long Time” and “Forever Young,” which Dylan wrote for his young son in 1972.

Considered the godfather of folk music in the Rocky Mountain region, Tuft established the Denver Folklore Center in 1962. He mastered with ease two of Dylan’s more challenging compositions, “Just Like Tom Thumb’s Blues” and “One Too Many Mornings.”

Sheldon Sands, who produced the concert and will produce music@theJ for ACE in the fall, performed a searing rendition of “Blind Willie McTell” with his wife Kathleen on vocals. He also performed “Ring the Bells,” a gospel-infused song, singing with Susan Berman, who sang a powerful solo on “Shelter from the Storm.”

Mark Anton had full back-up for “Knockin on Heaven’s Door,” a song with several possible interpretations – religious and secular. Eve Ilsen also had back up from the other musicians performing. Taking the country and western tinged “You Ain’t Goin’ Nowhere” and giving it a little jazzy swing, Ilsen brought mesmerizing intensity to a song whose meaning she frankly says eludes her. No one in the crowd was able to offer an explanation of the charmingly poetic lyrics.

Rabbi Jack Gabriel, who lived in Boulder many years ago and now makes his home in Fort Collins, provided easily the sweetest Father’s Day moment performing a duet with his son David on “Minus Zero/no limit.” Michelle Wolf also performed with her son Josh on a stirring version of “If Not for You.”

Presented by ACE: Arts, Culture and Education at the J, the concert launches a new musical series that begins in the fall.

music@theJ will feature monthly musical events featuring community guests, bands and local musicians. The schedule will be announced July 1 on Boulder Jewish News and at Boulderjcc.org.

Kathryn has spent her professional life writing about, teaching, and presenting the arts. Founding Director of the Boulder Jewish Film Festival, Kathryn was Director of Menorah and ACE at the Boulder JCC from 2003 through August, 2019. The former film and theater critic for the Boulder Daily Camera, Kathryn is the author of "The Fifty Greatest Jewish Movies" and "The Fifty Funniest Films of All Time." kathryn.bernheimer@gmail.com
Previous July Torah Study Class Open to All Jewish Women
Next Weekly Edition: June 23rd, 2017