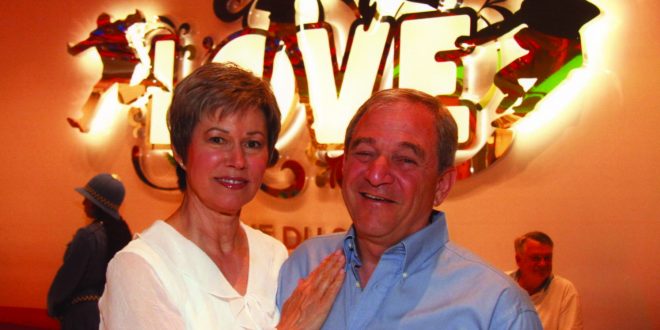 We could not be more honored to be honoring Bright Stars, Dodi & Bob Klutznick, as they have truly held the vision for the JCC and the Boulder Jewish Community for decades.

Here is their story, as told by Dodi:

Bob and I met over the July 4th weekend in 1969. I was camping at Mt. McKinley National Park in Alaska with my parents when a van pulled up near us. The campground was full, so the young men in the van asked my dad if they could share our large camp site. One of the young men was Bob Klutznick, the man who became my husband! Forty-six years, three children, and six grandchildren later we are still together and our love story continues.

Bob and I married on June 21, 1970, in Houston, Texas, and then moved to Boulder for graduate school. We joined Har HaShem and quickly became involved creating lifelong friendships. Bob joined the board as treasurer and worked his way up to president and became the chief bottle washer. Later, he transitioned to become the president of the Hillel Foundation of Colorado where he worked closely with the United Way campaign in the Boulder Denver Metropolitan area and became a teacher at the Boulder Day Nursery (BDN).

In order to address the needs of single parents and low-income families, he was willing to beg and borrow resources from friends, United Way, Allied Jewish Federation of Denver (AJF), CU, the City and Boulder County Department of Social Services.

Our story with the J started in the late 1970’s and early 1980’s when multiple Jewish groups began to unite around the need for a Jewish community. Plans began to formulate by the “Perkins Commission”, which met monthly at the Boulder restaurant, Perkins. At that time it became clear that there was a need for a community campus.

After hosting dinners for the AJF of Denver, pooling resources from the Denver and Boulder communities, and many long meetings later, we now have our beautiful Boulder JCC!

The rest of the story will be written by those reading these pages and those who are yet to come! Some of our affiliations during our journey: