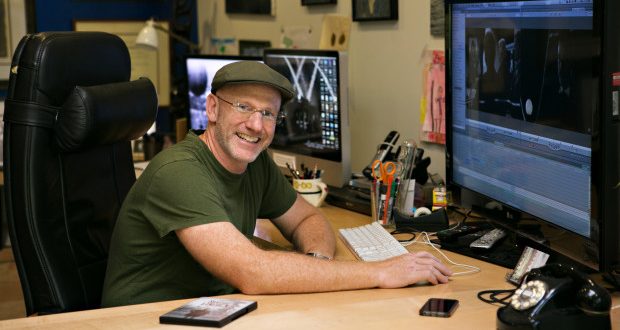 A Remarkable Man Comes To Boulder

About ten years ago, I watched a film that was both hysterically funny and deeply serious at the same time- kind of like Jewish life in general these days. It was called, “When Do We Eat?” The theme was a rather dysfunctional Jewish family coming together for a Passover Seder. The movie was complex; elements of it were religious, raunchy, and both real and surreal. On a second viewing, I decided to watch some of the back story on the film, and saw a man who looked like a director, running back and forth with a cap on his head and Tzizit hanging out. I said to myself, I have to connect with this man whose name is Salvador Litvak.

I did contact him, and we became email friends at first and then live-in person, as I found out he had relatives in Boulder. We made it a point to meet whenever he came here, and I always dreamed of him making a public appearance in our city. Well, here it is folks! On Thursday, June 8th, he will be at the JCC where, after a screening of “When Do We Eat?” he will do a Q & A.

What impacted me the most in the back story was a conversation between three consulting rabbis called ‘The Mystical Seder.’ One part of the conversation was the probably deliberate parallels between the four sons of the Haggadah with the four rather dysfunctional sons in the film. One of the rabbis said that for him, the most important outcome of the film might be that the ‘fifth son’ who is not even at the seder, would be so affected by watching the film, that he or she would consider visiting or revisiting a seder afterwards. It captured the essence of the positive impression that even a fanciful comedy could have on a sensitive audience.

Sal, as he is usually called, also wrote and directed, together with his charming wife Nina, another unusual film called, ‘Saving Lincoln’, about the true story of the relationship of Abraham Lincoln with his bodyguard, Ward Hill Lamon. Besides being an intriguing story, for this movie, Sal developed a unique filming technique called CineCollage which conflates live action with vintage photography. It is a very moving film of Lincoln’s endurance and bravery in the service of what he saw as his destiny.

But Sal is not just a film writer and director. In his search for deeper Jewish connection, he also began a seven year undertaking to join Daf Yomi, a study program where Jews around the world learn one page of Talmud a day. Out of that commitment came his present blog called, ‘Accidental Talmudist,’ where he discusses a great variety of Jewish related topics from global social issues to personal human interest topics, interspersed with music, humor, hope and inspiration. He also has a feature called, ‘Thursday’s Heroes,’ where he highlights individuals who he feels have led extraordinary and inspiring lives. In fact, I was deeply honored to have been selected as one of those heroes! After that posting, I was invited by several people to come visit, speak, or spend time in their communities. (Don’t worry; I’m staying in Boulder for the time being☺).

Sal is also featured on other sites like Aish.com and Hevria. As he concludes one of his Hevria posts, when asked what kind of a Jew he is: ‘I’m a complicated Jew, and as far as I can tell, that’s the biggest denomination of all!’ About his path to more meaningful Judaism, he writes in an article in Aish.com: ‘I found my way back, thanks to a confluence of events. My grandmother died. I stumbled into the right shul. I got a taste of deep Judaism, and a constellation of secular myths exploded around me. I found that our ancient tradition spoke to me in innumerable ways, even while I remained scientifically oriented and modern. More to the point, I became a better husband, father, son, brother, friend, and citizen when I became a practicing Jew.’

But unlike some other ‘returnees’, Sal doesn’t keep his enlightenment to himself. He widens his path more and more to include other seekers. He feels that just as Jews have an obligation to care for the ill, he feels we need to care for others who find themselves spiritually lost.

On Sunday June 11th, my pal Sal will speak about the personal details of his extraordinary, eclectic and ongoing Jewish Journey. I hope many of you will take advantage of this opportunity to meet this very special and inspiring person.

Salvador Litvak appearances at the J:

I have been teaching Torah and Chassidic writings for over forty years to students of all ages and backgrounds, both on the East Coast and the Midwest. I have been a director of several Jewish organizations in Santa Fe and Colorado. My articles and poetry on a wide variety of Jewish topics have been printed in many publications, and also are available online.
Previous Nobel Prize Winner Bob Dylan is Honored with a Tribute Concert
Next 23rd Boulder Jewish Festival Big Success