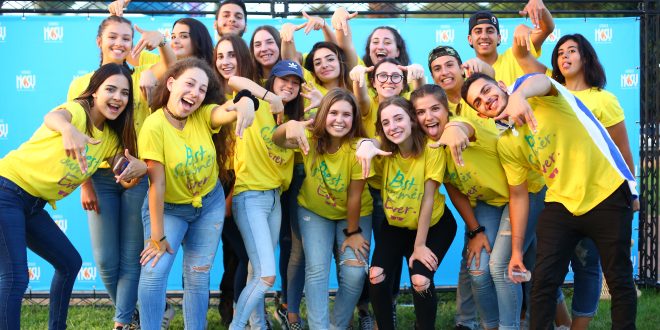 (JERUSALEM – August 3, 2017) – Over 2,000 campers and staff members participating in summer programming of the Orthodox Union (OU) gathered this week at Park Raanana for a celebratory event bringing together participants of 17 different Israel programs organized by the OU’s NCSY. The event featuring Jewish music superstar Mordechai Shapiro served as the largest ever gathering of NCSYers in one location in Israel and was designed to act as a salute to Jewish unity and strengthening bonds between Diaspora youth and the Jewish state.

NCSY, historically known as one of American Jewry’s renowned educational and social programs uniting both observant and non-observant youth, has been increasingly involved in promoting programming in Israel and instilling a love for the Jewish State as an integral aspect of contemporary Jewish identity.

Allen Fagin, CEO of the Orthodox Union and a New York resident said,

“The real story here is how this event truly exemplifies Jewish unity and the potential to bring together Jews from different communities and levels of observance to celebrate a common ideal. We have kids who have been taught Torah their whole lives dancing and singing alongside campers who had never opened a Hebrew text before. More than ever before, they can appreciate that whatever their previous differences, here in Israel, we are one people with one heart. If that doesn’t epitomize Jewish unity, what does?”

Avi Berman, CEO of OU Israel said that the sight of hundreds of young American Jewish youth growing closer to Israel was a source of considerable inspiration. “At a time when people speak of a growing disconnect between Israel and the Diaspora, these campers are proving that just the opposite is possible. The fact is that through education and a spiritual connection, hundreds of American youth from all backgrounds will return home with a true sense of the central place that Israel has in their lives.”

“I go to public school. I don’t get to meet a lot of Jewish people,” said Natalie Grinshpun, 17, from Apple Valley, Minnesota. “But as soon as I come to Israel, I can feel the Jewish people around me, I can feel the support all the time. It makes me feel like I belong somewhere, like I am home.”

“I think people can’t really understand their Jewish identity until they come to the place of the Jewish people,” said Samantha Fern, 18, from Livingston, New Jersey. “Everything here just comes to life and there’s so much meaning behind everything.”

NCSY currently offers 17 different summer programs, each geared to a different interest and intended for students of differing levels of observance. Over the course of a multi-week program in Israel, the programs combine educational, touring and social action elements specifically intended to inspire pride in Jewish identity. Some campers spend their summer volunteering across the country, others are matched with internships, and some travel with special needs campers.

Jacob Winters, an 11th Grader from Deal, NJ who is participating in the Yad B’Yad program which brings together teens and participants with special needs said, “No matter what program we are on, we all joined together for the common goal of having fun and bringing back the type of baseless love we need to create a better Jewish future. I have never been to Israel before and as soon as I got to Jerusalem I felt a connection go through my body that was like nothing I have ever felt before. At first I was skeptical about going to Israel and now I never want to leave.”

They call me "NewsHound IV," because I'm a clever Finnegan, sniffing out stories all over the Boulder area. I love Jewish holidays because the food is GREAT, especially the brisket. Well all the food. I was a rescue pup and glad to be on the scent!
Previous The Current Threat: Understanding Extremism in America Today
Next Early Morning Kitchen Fire Destroys Lodge, Forces Evacuation of Ramah in the Rockies