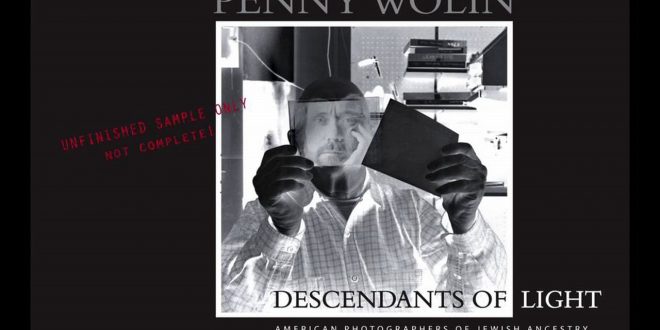 Photography “Exhibition” on the Big Screen in Levin Hall

Penny Wolin has been a photographer since she was 10 years old. When she was 16, she was given her first high quality rangefinder camera and the necessary darkroom equipment by her older brother, Michael Wolin, who lives in Longmont and spent his professional life repairing cameras.

The Wolins grew up in a Jewish home in Wyoming, and two bodies of Penny’s work pay tribute to her home state. Penny created a visual and verbal study of 140 years and five generations of Jewish culture in Wyoming in “The Jews of Wyoming: Fringe of The Diaspora,” and photographed and interviewed Wyoming’s native and newly arriving residents, ranging from to oilfield roughnecks to elected officials for the traveling exhibit and book, “Jackalopes, Cowboys and Coalmines: A Photographic Survey of Wyoming.”

Penny, who lives in California, is self-described as a “visual anthropologist,” and she feels strongly about combining words and images. Known for her documentary and conceptual photographs, Penny has completed commissions for major corporations, national magazines and private collectors. For the past 25 years, she has used photographic portraiture and oral interviews to research Jewish civilization inAmerica. She has exhibited solo at the Smithsonian, and her work is held in permanent collections of such institutions as the Santa Barbara Museum of Art, the New York Public Library and the National Museum of American History.

Penny’s crowning achievement is her new book, “Descendants of Light: American Photographers of Jewish Ancestry,” which has generated rave reviews and attention in the media.

Penny, who has been described as “a street photographer who knocks on the door,” traversed the country to meet photographers in their homes and studios. She spent more than eight years on this project, and met with more than 65 photographers, including Jay Maisel, Joel Meyerowitz, Bruce Davidson, Annie Leibovitz and Rosalind Solomon. For each, she features a two-page spread including excerpts from their conversations. In her interviews, she pushed these artists to articulate something about their photographic vision, their approach to Judaism, and whether they see their work as photographers as somehow connected to their Jewish background. She thinks that there’s something in the Jewish collective history of exile that motivates these photographers and enables them to observe their surroundings deeply. Penny will present the highlights of her new book, with images projected on the big screen in Levin Hall, on Wednesday, November 9. For reservations to “Jewish Photography in Focus,” CLICK HERE.

On Thursday, November 10 at noon, Penny will speak at ACE’s Lunch and Learn on another aspect of her long and varied career: taking portraits of celebrity musicians. Stories, anecdotes and images combine in this look at the complexity of capturing the LA music scene. CLICK HERE FOR RESERVATIONS

Kathryn has spent her professional life writing about, teaching, and presenting the arts. Founding Director of the Boulder Jewish Film Festival, Kathryn was Director of Menorah and ACE at the Boulder JCC from 2003 through August, 2019. The former film and theater critic for the Boulder Daily Camera, Kathryn is the author of "The Fifty Greatest Jewish Movies" and "The Fifty Funniest Films of All Time." kathryn.bernheimer@gmail.com
Previous Grow Your Judaism!
Next “Shabbat Can Do That!” – The Shabbat Project Is Coming

Join Kathryn Bernheimer via Zoom for a sneak preview of the film festival on October 12 - then buy tickets.