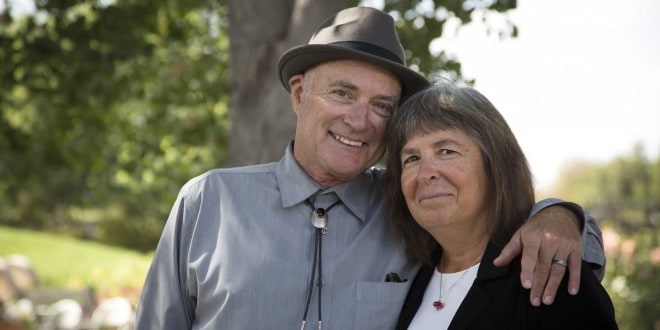 The Shaffers Set a High Bar for Jewish Engagement With more than five decades of enthusiastic dedication to the Boulder Jewish Community, as well as the international Jewish community, the Shaffers are being honored by the Boulder JCC for setting a very high bar for Jewish engagement.

The Shaffers’ ties to the JCC go back several decades, to 1994, when Julie served as co-director of the Boulder JCC preschool for seven years, leading it from classroom space at Congregation Har HaShem to a house on Glenwood, and, finally, in 2000, to its current home – a JCC of its own on Kalmia. In the coming months, that once-tiny school Julie nourished will move to a spacious and gracious new wing of the new Boulder JCC on Cherryvale and Arapahoe. At the JCC, Julie has served on numerous advisory boards and search committees, most recently on critical transition, building, and capital campaign committees. Now the Executive Director of Oreg Foundation, the developer of Boulder Jewish Commons, Julie has been intimately involved in all facets of the new JCC.

On the side, Julie managed the startup of Judaism Your Way in Denver and continued as a board member for many years. She is also an officer and board member of two New York City-based organizations, Joshua Venture Group and Encounter, an organization with which Bruce has worked closely. Encounter facilitates meetings of Jewish leaders with Palestinians in the hopes of transforming conflict through face to face understanding.

In recent years, Bruce’s interest has increasingly focused on Israel, where he is now a citizen and half-time resident after stepping back from his decades-long career in law and work on locally grown Jewish projects. For years, Bruce was a popular teacher at Hebrew High, bringing his own engaging and unique style to the classroom and engaging scores of local teens in their Torah-inspired Jewish textual tradition and cultural history. A typical class title: Torah and the Art of Bicycle Maintenance. In Israel, he’s active with groups promoting mutual acceptance between Israelis and Palestinians:

“I think that’s the key to arriving at an agreeable accommodation of all peoples in the Land,” he explains. “I’m very excited by the response to my photography classes for combined Jewish and Arab students, in the west bank and Jerusalem.”

Bruce is also honored to have had several of his revealing, Israeli-street photographs chosen for group shows at Jerusalem’s  Cinemateque and Givat Hatachmoshet galleries.

On being honored at Reflections, Bruce says he most appreciates being among all the other honorees:

“A star is the privilege of being among a people that G*d promised would number as many as the stars. A bright star means that I struggle to do my small part to fulfill Jewish purpose: to reflect  G*d’s mitzvot into the world. The powerful encounters I had with inspiring people at the JCC really helped light me up.” Julie and Bruce, who moved to Boulder separately in the mid-‘70s, have three grown children – Sierra, Zane, and Maya, who were all raised in Boulder and were closely tied to Jewish community. Adding even more members to the community, Julie’s mother Barbara remains active in the Boulder Jewish community since moving to Boulder with Julie’s late father Howard more than a decade ago. “The early JCC years were challenging, rewarding, and a lot of fun,” the Shaffers agree. “But the big bang is now. We’re really excited about the creative energy being brought by leaders inspired by Jewish values to projects such as the Milk & Honey Farm, Boulder Jewish Teen Initiative, and Camp Inc., among others. Our hope is that all JCC-goers will infuse their JCC activities with the Jewish people’s particularistic and universalistic purpose – and have a great time doing it.”

They believe that a meaningful Jewish future in America depends on that.

Still, they acknowledge sweetness of this sentimental moment.

“I’m just so happy that Julie is being honored for her community-building work and her irrepressible twenty-year effort to carry the new building from concept to concrete,” Bruce beams. “Our family loves her for all along staying present for us, braving our river crossings, and being the brightest light in our lives.”

Jonathan Lev, MPA, joined the Boulder JCC as Executive Director in 2010. He is a passionate educator and entrepreneur who combines his experience at Jewish summer camp and involvement with the startup of Boulder based Renewable Choice Energy to influence his leadership as a nonprofit executive and Jewish professional. He was certified as high school teacher and Summa Cum Laude graduate from the University of Colorado in Boulder. For more than six years, Jonathan was a leader in the field of Jewish summer camp where he worked to enhance the level of supervision and mentorship for both campers and staff through innovative summer and year-round trainings. In 2007, Jonathan continued his studies and was selected as a Taub Fellow at New York University in the dual-master’s degree program for a Master in Public Administration in Nonprofit Management and Master in Hebrew and Judaic Studies. Since starting his role in 2010 at the Boulder JCC, Jonathan has led the community's $30M capital campaign to build a new JCC campus, which opened in summer 2016. He speaks regularly about making philanthropy fun and the role that inter-generational giving has on creating a legacy. Outside of work, he and his wife, Lyndsay, and their daughters, Mira and Susanna, can be found hiking, skiing, practicing yoga, listening to music, and planning their next great adventure. Follow him @jonathanlev on twitter.
Previous Quaking Aspen, Dragonfruit and the Dirty Dozen Have This in Common
Next Week in Review: January 29th, 2016