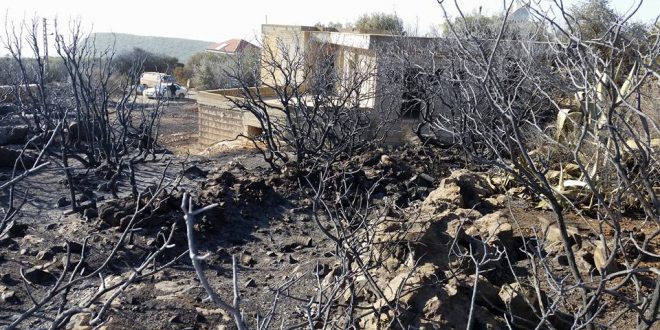 JNF Donors and Israelis Open Their Hearts During and After Fires

As life returns to normal in the weeks since devastating fires destroyed 10,000 acres of land and forests throughout Israel, Jewish National Fund (JNF-USA) announced that it raised $6 million to help the nation recover with new fire trucks and life-saving equipment, and is working to regrow and regenerate thousands of lost trees.

“Last month Israel experienced the worst fires in our Jewish nation’s history and the resources of Israel’s fire and rescue services were depleted,” remarked JNF-USA President Jeffrey E. Levine. “I say with great pride and much thanks that JNF-USA donors came forward to help meet the great need, purchasing 25 new trucks and with commitments for more on the way. Additionally, it was amazing to see how Israelis from all across the nation came together to help each other.”

In Northern Israel, Michal Shiloah Galnoor, CEO of Western Galilee Now [a consortium of businesses in the north], described how innkeepers and kibbutzim opened their doors for anyone needing shelter from the fires: “It was so beautiful to see that hundreds of rooms were made available for free to anyone in Israel in need of a safe place to go. While we had our own fires and almost lost Stern Winery, the communities really came together – Jews, Arabs, and Christians – this is the power of coexistence.” Further south, Yakov Guttman, a 32-year-old originally from New Jersey who had moved to Israel through Nefesh B’ Nefesh, was working non-stop as part of Tel Aviv’s firefighting force where he has been for over two years. While dousing flames, always on his mind was his wife’s impending trip to the hospital to give birth.

“We worked 24-hours straight, day after day, including on Shabbat,” he said. “There was no question that this is my duty to save our citizens, our people. And when I finally arrived home and my wife saw me she was so relieved because she couldn’t get a hold of me on my cellphone. It was later that I realized that the great purpose of my life is to be here, a firefighter, and I feel good knowing I did something in this world.”

JNF-USA is also investing in intensive reforestation of areas destroyed by fires by assisting the forces of nature with regeneration—a form of growing new trees or the rehabilitation of preexisting ones. It is estimated that it will take thousands of hours to clear damaged forests and lands in an ecologically-friendly way to spark a regenerative growth.

Plans call for initially removing burnt materials which must be carried out according to security considerations, such as possible dangers of occurring fires, scenic and aesthetic considerations, land preservation, protection of natural resources, and accessibility and implementation capabilities. Priority will be given to removing burnt materials in cases where there are safety hazards and lower priority will be extended to areas with limited accessibility.

Due to the extent of the damages caused by fires, planting cannot happen for at least one year so as to prevent the erosion of critically needed topsoil. Foresters have been dispatched throughout affected forests and lands at assess which trees can regrow naturally or need to be rehabilitated. This, too, is a time intensive procedure that is necessary for the long-term health of the country’s forests. During the first year, trees will only be planted along security roads, at ceremonial tree planting events, and in parks requiring fresh plantings.

Once the winter season has passed, foresters will reassess what species of trees will be used for planting, taking into account any erosion of topsoil. Trees that survived the fires will be monitored for one year since it is expected that they will be attacked by various pests, such as the bark beetle.

Jewish National Fund-USA is on the ground today and every day building a stronger, healthier, more secure Israel. In cooperation with KKL-JNF, partner organizations, first-responders, and firefighting battalions, JNF-USA is working to address both the immediate needs and those that will arise tomorrow for the land and people of Israel.