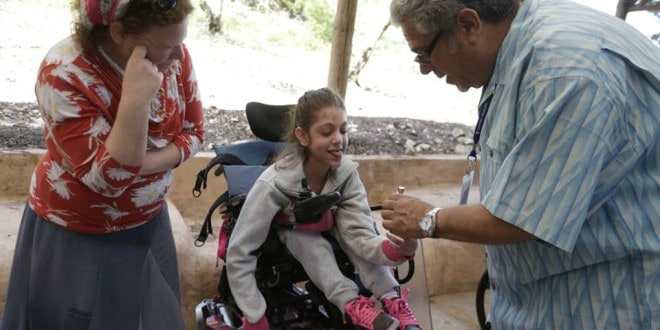 Alan Wolk of the JNF's Task Force on Disabilities chats with a girl at LOTEM-Making Nature Accessible, where accessible trails make it possible for hikers in wheelchairs to enjoy nature.

The afterglow of my recent trip to Israel as part of JNF’s Task Force on Disabilities has not faded, even after all these weeks. I thought I had an idea of what JNF did to help people with disabilities integrate into society, but seeing it firsthand opened my eyes to just how much JNF does to ensure no one feels left out and that as many as possible get the quality care they need. I see so much opportunity for each of JNF’s partners under the disabilities and special-needs banner to do more for the people of Israel.

I will never forget the $1 Billion Roadtrip Mission earlier this month and what it meant to me personally. I just wish my parents could be around to see what JNF is doing. They would be amazed and so proud of my commitment to this organization. You see, my older brother Phillip was profoundly disabled. Seventy years ago, there were not many options available to improve his quality of life. He passed away in 2004 at just 60 years old, having lived most of his life in a care facility. JNF’s commitment to the disabled and world-class facilities like Aleh Negev might have made a difference for Phillip and my family.

I’ve been a supporter of JNF for many years. To me, supporting JNF meant supporting Israel and securing a future for Jewish people around the world. Nine years ago I retired from a corporate leadership role. I embarked on a second career as a part-time university instructor and volunteered my time and expertise to JNF Atlanta, of which I am now co-president. I spend a considerable amount of time working with the staff and spreading the word about JNF’s great work in Israel. I am proud to say I am a JNF major donor, a member of the Task Force on Disabilities and have just recently taken on a leadership role on the Special In Uniform committee.

During the recent mission, we visited a Special In Uniform unit at the Eilat naval base, where I saw a group of young people with disabilities in uniform standing side-by-side with other IDF soldiers. The commander beamed with pride and explained that each soldier from Special in Uniform brings so much to their unit. This program not only has an impact on the lives of its soldiers, but also on the men and women in their units who will know after their army service just what societal inclusion means.

At another base I met former IDF Air Force pilot Orly Lahat, who spoke about how he never thought a program like this could exist and that his son Omer would only hear stories of his, and others’, time in the IDF. His son has cerebral palsy, and is now a customer service rep for the IDF. He is able to serve his country with pride, and have the same rite of passage as every young Israeli, thanks to Special in Uniform.

Seeing young children with disabilities playing at Aleh Negev as part of their rehabilitation is something I will never forget. I will will never forget the way their parents looked at them while they played. It was a look of hope and thankfulness — hope that these children will some day have a level of normalcy and thankfulness for Aleh Negev’s care.

The outdoors, hiking and enjoying parks, is ingrained in Israeli life. At LOTEM-Making Nature Accessible, I saw what I thought was impossible — a group in wheelchairs pressing olives and making olive oil. LOTEM makes it possible for those in wheelchairs to experience nature just like everyone else.

At the Red Mountain Therapeutic Riding Center on Kibbutz Grofit, I met Jill Oron, the lead therapeutic riding instructor, and learned her goal is to make horseback riding therapy available to the people in this remote Negev region where other essential medical services are lacking. She provides therapy to nearly 200 children and adults with physical and mental disabilities as well as emotional and behavioral issues.

A young girl’s smile broadened as she was set on a horse for her weekly therapy. Seeing her connect with the horse, be so comfortable with it, and move as if she were flying was awe-inspiring.

JNF is an intellectual concept until you go to Israel and see firsthand what we do. We are not just Abraham’s Well or Ammunition Hill, even though these historic sites are so important in telling the story of where we came from and who we are today. We change the lives of people with disabilities. We broaden opportunities for people to live comfortably by helping build the Negev and the Galilee. We provide normalcy for children living in the border town of Sderot with an indoor playground that’s also a secure bomb shelter.

We make fundamental differences for so many who have it so hard. JNF inspires me. Moves me. I hope I have inspired you to become a little bit more involved.

Previous Teens: ADL Words to Action
Next Hadassah Spring Parlor Events Not For Women Only