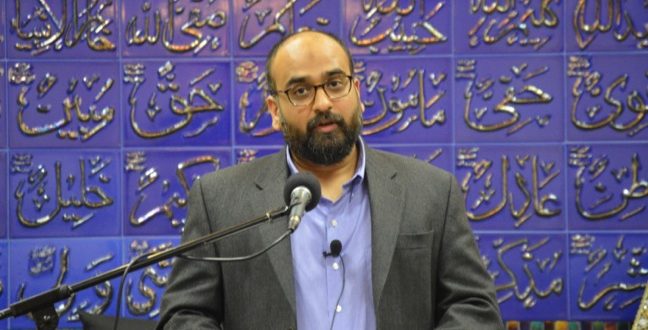 Sharia or Islamic Law is widely misunderstood – yet hotly debated – as a medieval system of governance that does not belong in the modern world. The reality of what Sharia has historically been, however, belies widespread caricatures. CU Religious Studies Professor Ali will explain what Sharia is, how it is related to Islam, and how it has evolved in modern times.

Professor Ali’s research focuses on the intellectual history of Shi’ism, including both the pre-modern and modern periods, studying Shi’ism through the lens of the concept of tradition and social network theory. Ali is also interested in Shi’i law and legal theory, especially the interplay between shariah and legislation.

What is your background as a scholar?

Professor Ali’s scholarly background began at Rutgers University, where he studied Religion and Philosophy, receiving his BA in 2003. Then in that same year he traveled to Yemen to continue studying Arabic. In 2007, he earned a MA from McGill University in Islamic Studies and is currently wrapping up his PhD in Islamic Studies from the same institution. His research interests include Islamic law, Sunni Shi’i relations and sectarianism, and much more.

What is your personal background?

Professor Ali is first-generation born in America and grew up in New Jersey. His family is from South Asia. When he was younger, he remembers skipping school to watch the Food Network. Ali once had hopes of going to culinary school, in the days “before everyone was a foodie.” Since 2015, Ali has lived in Colorado with his wife and two children, age 7 and 18 months.

What is the central ideology of Sharia Law?

Because there are eight different Islamic schools of law, the central ideology of Sharia law may vary a bit throughout the schools, but generally there are five stated aims of Sharia that are agreed on. These are the preservation of life, faith, intellect, lineage, and property. What is the biggest misconception about Sharia law?

How widely is Sharia law practiced?

Sharia law is extremely widely practiced. It is quite difficult to pinpoint the number of people who practice Sharia law because anyone who has prayed has practiced Sharia law. In a sense, anyone who acts in any way in accordance with Sharia is then practicing Sharia, according to Professor Ali. For instance, think about how Reformed Jews and Orthodox Jews have very different practices regarding prayer, ritual, lineage, and such. Both are practicing Judaism, just in different lights and to different degrees. Islam is a scholarly tradition and thus there is no institutional jurisdiction over who is to say what is and what is not Sharia law.

Kathryn has spent her professional life writing about, teaching, and presenting the arts. Founding Director of the Boulder Jewish Film Festival, Kathryn was Director of Menorah and ACE at the Boulder JCC from 2003 through August, 2019. The former film and theater critic for the Boulder Daily Camera, Kathryn is the author of "The Fifty Greatest Jewish Movies" and "The Fifty Funniest Films of All Time." kathryn.bernheimer@gmail.com
Previous The Calendars Are In
Next Chabad Rings in Jewish New Year with Festive Community Feast