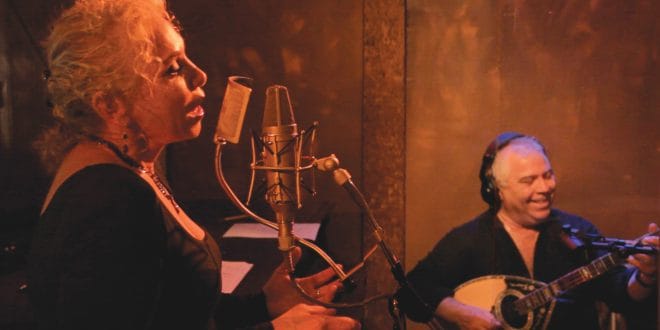 A Delectable Evening with the Ljuba Davis Ladino Ensemble Ladino, or Judeo-Spanish, is the historical language of the Sephardi Jews, who after the 15th century expulsion from Spain dispersed to Greece, the Balkans, Turkey, North Africa and beyond.  Along with these wondering Jews came a rich and evolving folklore, literature, cuisine and music.  In Ladino song, we hear elements distinct not only to Spain but to the Middle East and North Africa, including the use of oriental melodic and percussion instruments, evocative melodies built upon ancient modes (notably the minor and major phrygian scales) which conjure a unique and dare we say-mystical mood.  While borrowing freely from a diversity of Mediterranean cultures, Ladino music, along with its colorful language and cultural, is endowed with its own distinct and mesmerizing flavor.

In preparation for their upcoming concert at the Boulder JCC, I’ve been listening to The Ljuba Davis Ladino Ensemble’s CD, East and West., 2012.  Being newly introduced to Davis, I feel an intrinsic connection through her voice, as when upon a first meeting you feel that you have known someone forever. Some familiar gems of the Jewish Sephardim and Mizrahi diaspora are here such as “El Dodim” and “Cuando El Ray Nimrod” (Avraham Avinu).  But it is in “Scalerica”, a Ladino wedding song, that the feeling of old Spain emerges… the verse is handled by Ljuba with dynamic range and amazing verve, while the chorus is a triumphant burst of unrestrained male and female vocals.   On Durme, a tender lullaby in 3/4 time, Davis displays an intimacy and tenderness that could make a grown man weep (if not sleep).

“A gifted singer and fluent Spanish speaker, Davis was fascinated by the morsels of Sephardic melodies—secular and liturgical—she encountered as a child, and later on recordings and in songbooks. An veteran performer, Davis contributed to the fascinating intersection of Jewish music revival and the folk movement, performing on major stages and in small clubs from Chicago to her Bay Area home. Berkeley was a hotspot of Jewish music creativity in the 1960s, and Davis was a sought-after singer and cultural trailblazer in the community.” -Rock Paper Scissors

ACE director and programming curator extraordinaire Kathryn Bernheimer has concocted an extraordinary evening for all the senses, beginning the festivities with an optional pre-concert dinner of Sephardic specialties, including Ljuba’s own recipe for Sephardic chicken soup.   Don’t miss this rare and delectable treat of an evening!

$18 concert only in advance | $20 concert only at the door |  Purchase advance tickets at boulderjcc.org (Dinner SOLD OUT)

Previous ADL Expresses Concern Over Increase in Hate Crimes in Colorado and Nation
Next Learning at Hillel: Scrolls and Rolls

Training on Supporting Our Community, a Free Virtual Program Hosted by Boulder JCC