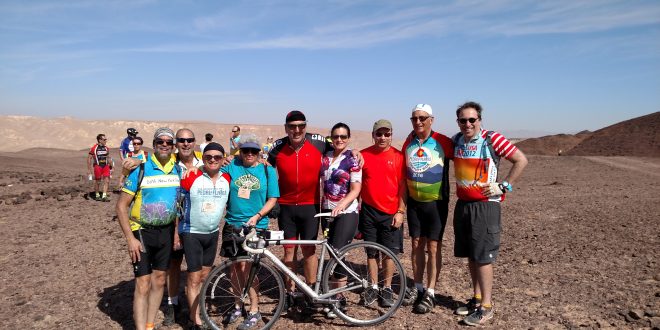 Team Rocky Mountain Chai on the last day of the ride in the Red Valley of the Negev.

Eight riders from Colorado formed Team Rocky Mountain Chai and participated in the 2016 Israel Ride (www.israelride.org) which supports Hazon and the Arava Institute.  There were 175 riders, 12 chaverim (spouses and others that toured along the route but did not ride) and 60 staff and crew.  We rode from Jerusalem to Eilat over six days (November 9-14), resting on Shabbat in Mitzpe Ramon.  Our team raised nearly $24,000, and the entire ride raised $775,000.

The team included me, my wife Karen Raizen (she was in the chaverim group and is not pictured), Allan Davidson, Denali Davidson, Jonathan Miller, Beth Miller, Ken Tolz and Jeff Bain.  Also in the picture is Nigel Savage, Founder and CEO of Hazon.  Rabbi Marc Soloway did not ride but did join us for Shabbat.

They call me "NewsHound IV," because I'm a clever Finnegan, sniffing out stories all over the Boulder area. I love Jewish holidays because the food is GREAT, especially the brisket. Well all the food. I was a rescue pup and glad to be on the scent!
Previous Adventure Rabbi to Hold Jewish Summer Camp Open House
Next Israeli Group Launches Video in Support of Terrorism Lawsuits Against Facebook