15th Anniversary of 9/11 Remembered in Israel

Marina Brodetsky September 12, 2016 News Comments Off on 15th Anniversary of 9/11 Remembered in Israel

It’s hard to imagine a truly moving, personal commemoration of something that happened 15 years ago, over 6,000 miles away, across continents and an ocean. Yet that is what occurred in Israel at the Jewish National Fund-USA (JNF) 9/11 Living Memorial in Jerusalem on Sunday, September 11.

As the world commemorated the 15th anniversary of the tragic attacks in lower Manhattan, the Pentagon, and in western Pennsylvania, Jerusalem – earlier in the day – honored the memories of the victims and first-responders in a heartfelt ceremony that included victims’ families and 50 visiting American police officers. Some of those in attendance at the ceremony were New York City first-responders, while others were American Jews who were present at the time of the attacks and would later make aliyah [immigrated to Israel]. NF’s 9/11 Living Memorial, donated by Edward Blank, a retired telemarketing pioneer from New York, was designed by award-winning Israeli artist Eliezer Weishoff, and is a 30-foot high bronze sculpture of a waving American flag that morphs into a memorial flame. It rests on a gray granite base, which includes a metal beam from the original World Trade Center towers. Surrounding the memorial is a circular stone-tiled plaza, funded by the Bronka Stavsky Rabin Weintraub Trust. It offers visitors a place to reflect upon their thoughts and memories. The monument is strategically located within view of Jerusalem’s main cemetery, Har HaMenuchot. The 9/11 Living Memorial symbolizes the special connection between the United States and the State of Israel. In fact, it is the only monument outside the U.S. to list all the names of the nearly 3,000 individuals, including five Israelis, who perished in the attacks.

Opening with the U.S. national anthem, the ceremony was attended by a diverse audience of domestic and foreign dignitaries, providing a moving and inspiring experience.

Ronald S. Lauder, chairman of the board of JNF-USA, pointed out the deep connection that Israel has with America and why such a ceremony would be held in Jerusalem. “The entire world remembers the shock and the horror,” Lauder said, yet, “nowhere else in the world was an act of terror understood better than here, in Israel.”

Among the attendees was a special delegation from Young Judea, whose attendance provided a unique perspective to the ceremony since many of the young people are too young to remember the events of 9/11 and its immediate aftermath.

U.S. Ambassador to Israel, Daniel Shapiro, noted in his remarks the attendance of the many young people who do not remember the events of 9/11, and said: “The idea that there walk among us adults who can only relate to 9/11 as a historical event, although it’s a natural process of time, is a jarring thought.” “How do we ensure that the thousands of stories are passed on to the next generation? How do we make it real for them?” Ambassador Shapiro asked. The solution, he said, was to liken it to the retelling of the Exodus story on Passover, and that it is the responsibility of parents to ensure that this chapter in history is not forgotten. Ambassador Shapiro also encouraged youth to be personally accountable and to keep the memory of this event alive. “For each of you who do not have your own personal memories of 9/11, ask questions, read accounts of the event, learn the history, visit the memorials, talk to families, and honor the firefighters and police officers who gave everything to save others.”

Mayor Nir Barkat of Jerusalem also addressed the audience, though few expected his remarks to refer to experiences as personal as his were. On the morning of the attacks, he had just landed in New York. In his speech, Mayor Barkat recounted how he saw the twin towers burn and collapse.

“The days that followed, I saw the grief and the pain, but also the bravery of the men and women of New York City fighting day-by-day to put their city back on track. As a Jerusalemite, as an Israeli, I felt a deep, deep connection. I know this pain well,” he said.

Barkat had still another personal connection. Daniel Lewin, an Israeli-American who had been an elite soldier in the Israel Defense Forces (IDF), was a successful businessman living in Boston. Lewin was on the first plane, and when he realized what was happening, attacked the terrorists to try and stop them. Sadly, Lewin was killed before the plane hit the first tower. Barkat was a friend of Lewin’s, and the attack was personal.

Deputy Minister and former Israeli Ambassador to the U.S. Michael Oren, who spoke on behalf of the government of Israel, had his own connection as well. Oren’s son, Yoav, was about to be drafted into the Israel Defense Forces and went on a trip to New York—to lower Manhattan—that fateful September. Yoav and his friends had scheduled to visit the World Trade Center the morning of the 11th.

When Ambassador Oren heard about the attack he suddenly realized that his son was supposed to be there at that time. “Yoav’s on top of one of those towers!” he remembered exclaiming. With all the phone lines down, it took hours until they finally reached him. Thankfully, Yoav and his friends had changed their plans and didn’t go to the site.

Sunday’s ceremony included a kaddish, the traditional Hebrew mourning prayer, recited by Tsvi Levinhar, who lost his son in the World Trade Center, as well the laying of a wreath by U.S. Marines and Israeli firefighters. Flowers were available to be laid alongside the plaques with the names of the victims. It was clear that many attendees had personal connections, as they combed the plaques looking for the names of their loved ones.

As the ceremony came to a close, it seemed fitting to end with the singing of the Israeli national anthem, Hatikvah, ‘The Hope.’ 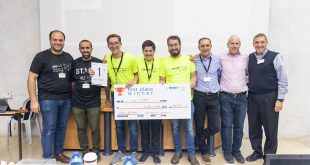