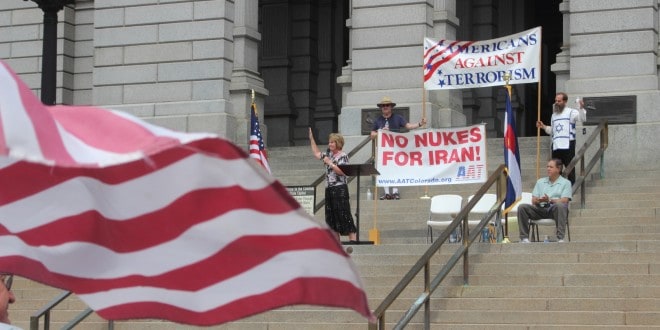 Nation’s First “No Nukes for Iran” Rally Held in Denver

There was a rally this past Sunday June 28, against a weak agreement that would allow Iran to acquire a nuclear bomb. By the Colorado Capitol building, demonstrators heard speakers speak out of concern for the safety of America and the Middle East. The primary concern was that instead of preventing Iran from achieving nuclear capability, the agreement would actually facilitate the process and create instability in the middle east and endanger America.

Dr. Neil Dobro, Chair of Americans Against Terrorism said “We believe this was the first grassroots event to openly engage in this kind of vital dialogue on the most dangerous and important issue for our generation. If Iran gets a nuclear bomb, it will not need a large army to cause unimaginable destruction and death.”