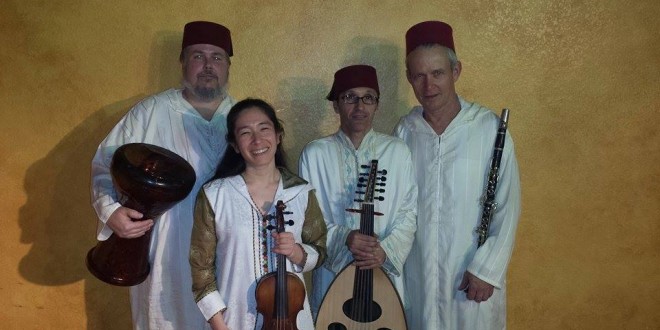 Moroccan Concert, Dinner – and a Chance to Visit Morocco

In anticipation of Menorah’s Jewish Journey to Morocco, we present a concert by Marrakech Express: Music of North Africa and Andalusia.  The concert includes an optional catered Moroccan dinner.  The event is this Sunday, November 15, at the Boulder JCC, with the optional dinner at 6:00 pm and the concert at  7:00 pm.  The cost for both the dinner and concert is $25; $15 for concert only.  The event is free to registered trip participants (and those who register on Sunday).  Reservations for dinner required by November 12.

Prior to the dinner and concert, there is a free informational session with Miriam Levinson, tour guide for the Jewish Journey to Morocco, March 2-15. To register for the concert, the concert plus dinner, the information session, or all three, CLICK HERE.

Marrakech Express takes you on a sonic journey to a place where the microtonal beauty of classical Arabic music, the traditions of Andalusian and rumba flamenco music from Spain, the rhythmic influence of the Mid-East and Africa, the soulful desert sounds of the G’nawi people, and the urban grooves of Moroccan sha’abi and edgy Algerian rai music, all blend together to make North Africa a crossroads of beautiful, exotic, and ever evolving sounds. Samir El Yesfi, nicknamed Tito Malaga, was born in Tetouan, Morocco.  From the very first time he played the oud (an Arabic fretless lute) at the age of 16, followed by intensive study of Spanish guitar, he’s aspired to master the musical styles of Andalusian, North African, and Mid-Eastern cultures and blend them with traditional Moroccan folk music (G’nawa) of the Berber tribes.  Samir is the leader of the Denver based world music powerhouse Tito Malaga band.

Dexter Payne, winner of the International Blues Challenge in 2011 with Lionel Young Band, was voted among the top ten clarinetists by Downbeat Readers Poll in 2004 and 2006. He performed coast to coast with Big Sky Mudflaps for nine years, including the NBC Today Show, and he partnered, compsed, performed, and recorded with the late Judy Roderick for 16 yrs. He toured three years with BarBQ Bob, and for over two years he lived and performed in Latin America, where he met and performed with Thiago de Mello and the late Ruben Gonzales among many others, and performed in NY and Brazil with Sharon Isbin. See www.dexofon.com for CDs with Lionel Young Band, with Brazilian composer Thiago de Mello, with Judy Roderick/Dr. John.   www.dexterpayne.com Sandra Wong started her life journey in upstate New York, displaying a deep love of music at a very early age. She began studying the violin at age seven with the intention of becoming a concert violinist. This remained her sole focus for fifteen years until she discovered fiddling and her musical world was turned upside down!  Since then, Sandra’s focus with her music has shifted from being an isolated striving for technical perfection to a focus on connecting other people and cultures through music as a way to build community and express our common humanity.  Opening this door with an exploration of Irish, Old-time and Bluegrass music, her folk music journey has moved her in to her current livelihood of teaching, performing, recording and collaborating with other musicians from a diverse range of world music genres.

In 1999, Sandra opened another door when she discovered a 14th century Swedish folk instrument called the nyckelharpa and fell in love.  This is a 16 stringed, keyed instrument played with a bow. It had become an integral part of her work and musical expression. Sandra has toured nationally and internationally as a solo artist and in collaboration with various musicians. She has appeared at numerous festivals and concert series.

She has released two solo albums; “It’s About Time” in 1999, and “Joy” in 2000. She recently released two collaborative albums; “Frolic and Romp” in 2009 and “Sunny Side Up” in 2010. Sandra has recorded on a number of her contemporaries projects. This discography is available on request.  Another important aspect of Sandra’s work is education and nurturing a deep love of music and the arts in both children and adults. She teaches privately, and in group and workshop settings, and presents family and children’s concerts.

Sandra also creates and personally facilitates musical study trips to different countries leading people into the heart of each country. A percentage of all Sandra’s CD sales and proceed from concerts supports organizations focused on environmental sustainability and conservation as well as social justice with a particular focus on women’s empowerment and children’s welfare.

Kathryn has spent her professional life writing about, teaching, and presenting the arts. Founding Director of the Boulder Jewish Film Festival, Kathryn was Director of Menorah and ACE at the Boulder JCC from 2003 through August, 2019. The former film and theater critic for the Boulder Daily Camera, Kathryn is the author of "The Fifty Greatest Jewish Movies" and "The Fifty Funniest Films of All Time." kathryn.bernheimer@gmail.com
Previous Huge Sale on Stretched Canvas to Benefit Bonai Shalom
Next Bonai Shalom Welcomes Phil Goodstein, Denver Jewish Historian