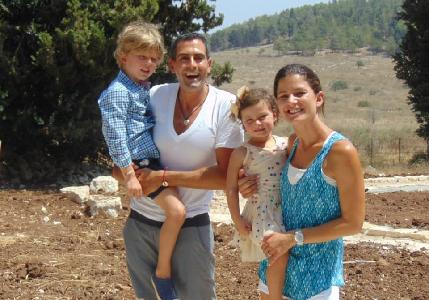 Matthew Leebove August 30, 2015 Arts & Culture Comments Off on JNF Funds a New Baking Center for the Disabled with LOTEM

Six years ago, John and Judith Shear of Chicago wanted to experience the real Israel, away from the well-worn tourist paths. What they discovered is a very special corner of the Holy Land – and a project their entire family could connect with.

Nestled in the Jezreel Valley of northern Israel, southeast of Haifa and the Carmel mountains, the Shears found Emek Hashalom, an ecological farm teaching Jewish concepts about the land to Israelis with disabilities. Between the shady, wheelchair-and-stroller-friendly hiking trail, groves of pomegranate trees, and the world’s only wheelchair-accessible winepress, the Shears also discovered a kind of peace at Emek Hashalom. “We just loved the place, and we loved what they were doing,” said Judith.

On that first visit, the couple took away a photograph of themselves straining to push the heavy, wheelchair-accessible oil press, a photo that hangs on their wall to this day. Moreover, the Shears took home with them the inspiration to partner with Jewish National Fund (JNF) and LOTEM-Making Nature Accessible, the organization that runs Emek Hashalom, in creating a baking center offering classes and workshops to children and adults with a wide range of disabilities.

“It was amazing,” John agrees. A member of JNF’s Chicago Board, he is very familiar with the many program areas LOTEM is involved with: “They had a couple of large projects and they said they were looking to do a baking center, and we thought it would be great.”

With Judith’s background in special education, they clicked immediately with Emek Hashalom’s mission to guide and empower individuals in a personal way, and at their own level.

“Accessible isn’t just something physical, like a wheelchair,” said Amos Ziv, director of LOTEM. “It’s also for those who are blind, or people with intellectual disabilities,” such as autism. When creating programs, whether at Emek Hashalom or at LOTEM’s sister location in Jerusalem, Ziv explained, “It’s not enough to say, ‘Here are stairs.’ That’s important, but it’s also important to create a whole program that everyone will understand.”

Creating curriculum that teaches and guides with sensitivity has become LOTEM’s specialty. Today, museums and government officials around the country are turning to LOTEM for advice and counsel, as regulations come into place mandating access for individuals with disabilities.

When the Shears first visited, the farm was leading groups in processing olives into oil, and pressing grapes. Ziv, along with leaders from LOTEM and JNF, had a vision of creating a wheat field and baking center so participants could have a total hands-on experience about the agricultural cycle that is so integral to the Jewish people and the land. This summer, the Shears returned to Israel to dedicate the new baking center, built with a donation of $100,000 from themselves and their parents, Herb and Barbara Shear of Pittsburgh and Palm Beach. Since their last visit, the couple has had two children, Ori and Tali. The baking center at Emek Hashalom is named after their young daughter, Tali Miriam Shear (pictured, near left).
“This is our first time back,” Judith said. “We’re very excited to do this,” She explained as they learned how wheat is ground into flour, and joined in baking their own pita flatbreads at the center.

The baking center’s chef – who is mentally disabled himself – described the many responsibilities he carries out every day, such as unlocking the baking center and helping groups prepare and bake in the Taboon oven. Visitors can also volunteer on the farm or the activity centers, and families and groups who contact LOTEM ahead of time can create a customized activity program. Ziv also mentioned that they’ve even had groups of disabled individuals from Taglit –Birthright come visit. LOTEM also offers classes and accessible programs in the Jerusalem area.

Ziv invites anyone visiting Israel to step outside of the main cities and take a trip up north to see Emek Hashalom. “Come for a few hours and learn about a different side of Israel,” he said. Ziv also credits young philanthropists like the Shear family who want to make a tangible difference and help build Israel. “They are directly responsible for the success of Emek Hashalom and LOTEM.” Before the Shears left Emek Hashalom, there was one more thing left to do. They had to take a new picture with the oil press with the whole family pushing the weighty handle. The new photo hangs on the wall back home in Chicago and serves as a reminder of the new link in the sturdy chain joining their family, and all American Jews, to the future of the land of Israel and its people.

Calling Colorado home since 2004, I am honored to work for the Jewish National Fund as the Senior Campaign Executive for the Mountain States Region. I work with the Mountain State communities, connecting with individuals, organizations, and community leaders who share Jewish National Fund’s passion and goals.
Previous A Shabbat Nugget: Upcoming 18th of Elul
Next Accidental Fire Damages CU Chabad Center After 1st Shabbat