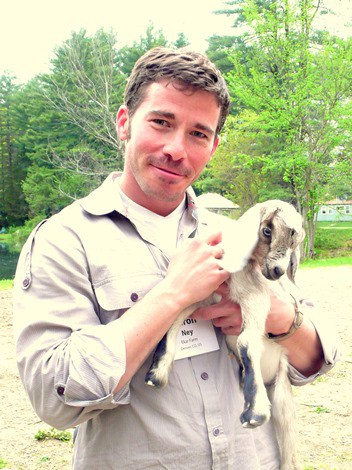 Jewish National Fund (JNF) is proud to announce Aaron Ney, Executive Director of Ekar Farm, as the keynote speaker at the JNFuture 6th Annual Wine and Trees Event on February 5, 2015 at the Redline Gallery in Denver, CO. The event, held in honor of Tu BiShvat, will be hosted by JNFuture Denver, JNF’s young leadership group, and feature the installation of Simon Schwartz as the latest president.

“I’m excited hearing the murmur of all the people in our community who plan on participating in our Tu BiShvat event,” said Simon Schwartz, COO of Strategic Resources Group Colorado, LLC and incoming JNFuture Board President. “JNF and JNFuture have done a wonderful job explaining to communities around the country the importance of investing versus involvement. While involvement is necessary and feels good, the investment in Israel has proven outcomes with a return on the investment… our homeland.”

JNFuture engages young professionals, ages 22 to 40, who are interested in supporting Israel and the Jewish community through educational, networking, and social opportunities. The Denver chapter was previously led by Amy Zeppelin, Senior Manager of Customer Care Technology at DISH Network, who developed the group into one of the most successful JNFuture chapters in the country today. Zeppelin will pass the torch to Schwartz at the Wine and Trees event during the leadership transition presentation.

Ney will speak about JNF’s work in Israel and will highlight Ekar Farm, a communal urban farm inspired by Jewish values. Ney’s first introduction to farming was at kibbutz Kfar Hanasi in Israel’s Galilee. The hard work he shared with fellow Jews instilled a lasting impression that working the soil can bring people together. He studied Comparative Religion at the University of Iowa and received an M.A. in Conflict Resolution at the University of Denver. Ney has been involved in organizing grassroots and social justice movements on both the national and local levels.

Now at Ekar, Ney has come to focus his attention on the hyper-local, recognizing that the revolution may come in one’s own backyard – one seed at a time, through subversive acts like planting seeds and sharing food. He has been with Ekar for over three years, first as a member of the founding team, then hired as the Program Manager and Outreach Coordinator, and most recently as the Executive Director.

I am thrilled to be part of this Tu BiShvat event and to join JNF’s community in discussing the Jewish traditions of sustainability,” Said Ney.

The event is chaired by Max Wolk, Archeologist and Founder of OIT Consultants. The event has the Denver community already buzzing with excitement.

Since joining the board of JNFuture, the mission of JNF has never resonated stronger with me. In light of current events, and the recent attack in Israel, organizations like JNF have never been more important,” said Wolk. “The upcoming Wine and Trees event is a great opportunity to bring in critical resources, and introduce the organization to a new universe of leaders, activists and potential supporters.”

Registration for the Wine and Trees event is now open. To RSVP visit jnf.org/wineandtrees or contact JNF Mountain States Director Boaz Meir at bmeir@jnf.org or 303.573.7095 x977.

Previous Can We Talk – About Death?
Next Rabbi Fred Greene Named Senior Rabbi at Har HaShem

Har HaShem Presents 2020 Symposium on Spirituality and the Environment