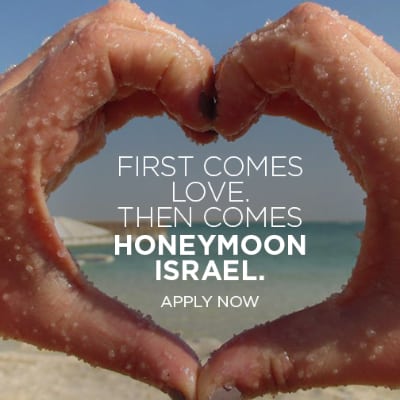 New York, NY – February 17, 2015 Honeymoon Israel announced that Colorado will be a pilot for the new program that brings young couples on highly subsidized trips to Israel.

We’re thrilled to be able to work with so many young couples in Colorado,” said Avi Rubel, CO-CEO of Honeymoon Israel. “We’re confident that this program, over time, will help to engage thousands of couples in an open-ended exploration of what it means to build a Jewish family and to be part of the Jewish people.”

The first Honeymoon Israel trip for Colorado couples will run from October 29 – November 7, 2015. The total cost for a couple is $1,800 including all flights and ground costs. Basic eligibility criteria are that couples have at least one Jewish partner, be married or in a lifelong committed relationship for five years or less, be between 25-40 years old and one partner must not have been to Israel before on a peer trip.  Honeymoon Israel is an inclusive program – interfaith couples, couples with a convert and LGBTQ couples are encouraged to apply.

The application for the first Colorado group will be open between March 1 – March 30, 2015 at http://www.honeymoonisrael.org/. An information session will be held in Boulder on March 5th at 6:30 pm, location TBD. RSVP to avi@honeymoonisrael.org

On Honeymoon Israel, participants will experience Israel’s culture, economy, politics and nature in a way they could never do on their own. The 20 selected couples will spend nine days in Israel touring Jerusalem and Tel Aviv, hiking Masada, floating in the Dead Sea, attending performances, sampling local cuisine, and exploring Israel’s diversity and complexity. They’ll also get a chance to meet Israelis, participate in Shabbat experiences, and visit sites important to Jewish, Christian, and Muslim history.

The concept of Honeymoon Israel emerges from the belief that during a couple’s first several years of marriage they will make some of the most significant decisions about the type of family they will have and the role that Judaism will have in their family. Honeymoon Israel’s goal is to provide couples with the ability to create a social network of similar couples and to help couples begin an exploration of how they will create a Jewish family in whatever way is meaningful for them.

Honeymoon Israel is working with a variety of local partners to ensure that the trip is highly impactful and that there will be a range of follow up opportunities for couples when they come back from the trip. Partners include the JCCs in Denver and Boulder, JEWISHcolorado, the Rocky Mountain Rabbinical Council and Judaism Your Way.

They call me "NewsHound IV," because I'm a clever Finnegan, sniffing out stories all over the Boulder area. I love Jewish holidays because the food is GREAT, especially the brisket. Well all the food. I was a rescue pup and glad to be on the scent!
Previous Registration Open for Summer Birthright Trips
Next Response: In Defense of Congresswoman Diana DeGette