Join Congregation Bonai Shalom for First (Second) Friday on November 13, 2015. Services begin at 6:00 pm, followed by 7:00 pm dinner and discussion at 8:00 pm.  RSVP by Monday, November 9 at bonaishalom.org. Family ticket is $54 or $18 for non-members and $15 for members.  BYOB kosher wine or beer.
Jews, like many other groups, came to Colorado in the 19th century to escape bad conditions elsewhere. Some were pulled by the hope of fortune. Others came in the belief that Colorado’s supposedly magic air would help them recover from tuberculosis. While they frequently clashed with one another, they also built a community. Saints intermixed with sinners, the pious with skeptics and utter cynics. How these patterns have repeated themselves into the 21st century will be the subject of Phil Goodstein’s lecture on Adventures in Colorado Jewish History.
Phil Goodstein is a Denver native. He is the author of more than 20 books, most of which deal with Denver history from the bottom up. He explores not just the rich and powerful, but also Denver’s crime, corruption, and all of its various “seamy sides.” Among his volumes are Exploring Jewish Colorado and North Side Story. The latter includes a history of the West Colfax Jewish community. Since the 1980s, Phil has walked and biked around Denver neighborhoods, escorting groups of curious history buffs through the city’s sordid tales and political conflict. He received his undergraduate degree at Metro State College, his master’s at the University of Denver, and his doctorate in Modern European History from the University of Colorado.

I am the Office Administrator at Congregation Bonai Shalom.
Previous Moroccan Concert, Dinner – and a Chance to Visit Morocco
Next Teens: Resumes and Ruach with Danielle Menditch 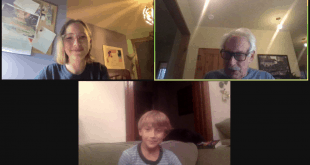 For those of you who are lucky enough to be grandparents, whether you're called Bubbie or Zeyde, or Grandma or Grandpa, or Safta or Saba, you have at least one thing in common. During Covid, Grandkids everywhere have been missing out on the love, playtime, cuddling, cooking and wisdom that grandparents routinely provide.