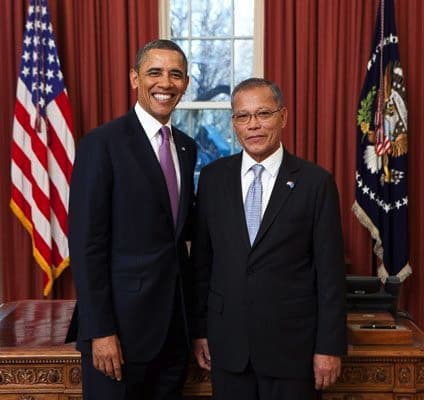 The Unique Alliance Between Israel and Micronesia, With a Colorado Twist

A small, but growing group of Colorado Jews this month honored the 28th anniversary of the special relationship between the United States and the Federated States of Micronesia, which has proven to be not only a strong ally of America but also of America’s ally, the State of Israel.

Within the United States, one of the largest Micronesian communities resides in Colorado, where 200-300 expats live and work. They originally relocated to the Denver-Boulder area as part of an airline partnership with Continental Airlines, which at the time had a major aviation hub in the Centennial State.

In an exclusive interview with Radio Chavura, Asterio Takesy, Micronesia’s Ambassador to the United States and Israel, explains why Micronesia and Israel have been close allies and why the two small nations continue to build economic and cultural ties to one another. “Israel was one of the first countries that welcomed us—extended a friendly hand of welcoming us into the world community even before we joined the United Nations and before we became independent,” says Ambassador Takesy, who has been the Micronesian Ambassador to the United States since January 2012, and who assumed the dual role of Micronesian Ambassador to Israel in February of this year.

Ambassador Takesy, who discussed relations between the Federated States of Micronesia and Israel during a telephone interview this past April, notes that his nation and Israel share Judeo-Christian values and the struggle to stand strong and independent in an often-hostile global environment.

[To hear audio of our exclusive interview with Ambassador Takesy, click here.]

“We recognize that Israel exists in a tenuous situation very much like ours,” Ambassador Takesy says, explaining that Micronesians struggled for decades to free themselves from the yoke of colonialism, represented successively by Spain, Germany, Japan and the American trusteeship. “So we understand the struggle for identity; the struggle to be a master of your household.”

On November 13, 1986, President Ronald Reagan signed into law the Compact of Free Association (CFA) between the United States and the Federated States of Micronesia.

The agreement, which had been approved earlier that year by Congress, provides Micronesia with defense and economic aid and other services. In return, America’s prime interests in the Micronesian territories are safeguarded.

Although Israel is not mentioned in the CFA, the special US-Micronesia relationship that was sealed 28 years ago also cemented a very special and valuable association between the Federated States of Micronesia and Israel.

In the United Nations General Assembly, the vote of every member counts equally. That means the collective will of Micronesia’s population, 106,000 men and women, counts every bit as much as the vote of China (1.36 billion people); India (1.25 billion citizens); Russia (143.5 million); Iran (77.5 million); and Saudi Arabia (28.8 million).

If only there were more pro-Israel nations like the FSM.

As it is, only the United States, Canada, the Marshall Islands and Palau stand shoulder-to-should with the FSM in defense of Israel when the UN is singling out the Jewish State for rote condemnation. The track records of other “allies” – including France, England, Germany, Poland, Australia, New Zealand, and all of Central, South and Latin America are nowhere near as pro-Israel as Micronesia’s.

Micronesia’s support for Israel does not derive from the island nation’s large Jewish population. The country – which is dotted across 1,700 miles of the Pacific Ocean, is predominantly Roman Catholic and Protestant, with about 6% of the populace maintaining aboriginal beliefs.

If you gathered all of the FSM’s Jewish citizens, it’s doubtful you’d have enough people (including children) to field a minyan – 10 people. The nearest Chabad House is more than 2,000 miles away. There is no local version of AIPAC or ZOA to lobby Micronesia’s politicians. And the idea of a Jewish-owned, pro-Israel Micronesian news media is flat out laughable.

So what is the explanation for why a small island nation on the other side of the world that could profitably curry favor with the Arab block of UN nations consistently aligns itself instead with tiny, persecuted, Israel?

In their unique ways, Israel and Micronesia are allies in isolation. While Israel is forsaken by much of the world due to the myopic and often anti-Semitic views of many nations, Micronesia is often forsaken due to its size, remoteness, pro-American values and Western-style government and economy.

While its colonial days are behind it, for Micronesia, existential threats continue – much as they do for Israel (although each country faces unique menaces).

Living on low-lying islands in the world’s largest body of water, Micronesians are threatened by global climate change and rising sea levels. And, despite having plentiful amounts of annual rainfall and lush rainforests, the FSM has few underground aquifers – causing a perpetual need for clean drinking water.

As an ally, Israel has aided the FSM by sharing its general technical prowess; its water desalination expertise; its agricultural advances; its knowledge of alternative energy solutions; its medical advancements; and its many other intellectual resources that Micronesia craves.

Micronesia is not a wealthy nation. About 25% of the population is unemployed, and much of the nation’s farming is done on a subsistence basis. All Israeli assistance goes directly to the people and – because of its consistent aid – Israel has helped secure the loyalty of the government in international forums and the gratitude of the Micronesian people.

At present, both Israeli and American tourism to Micronesia is minimal – but ripe for growth. FSM is a paradise for scuba divers, offering a wide variety of dive sites that include abundant sea life and the wrecks of World War II ships (first made famous by Jacques Cousteau, who explored and filmed some of them for a 1969 documentary).

In Israel, many Jews mark America’s Independence Day each July 4th as a sign of respect for the friendship that the United States has consistently demonstrated toward the Jewish State.

Likewise, some Israelis and American Jews take note annually of Canada Day, on July 1st, in recognition of the appreciation they feel for our northern neighbor.

The day when many Israelis and American Jews mark November 13th for the importance that the Compact of Free Association holds to Micronesians is not yet at hand. But it should be.  As Jews and Zionists, we owe the Federated States of Micronesia and its people our deepest respect and appreciation.