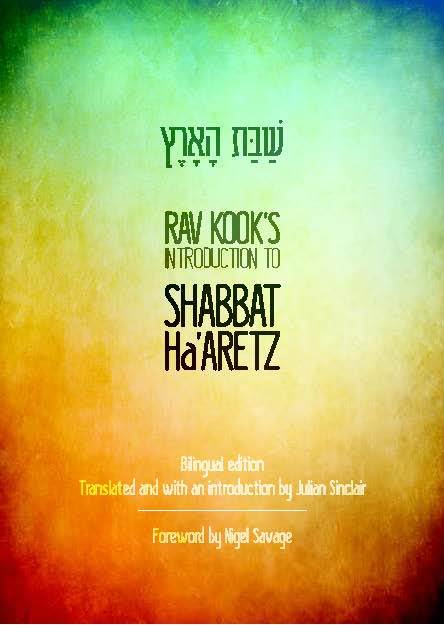 The “Shabbat Ha’aretz” national book tour will be stopping in Westminster and Boulder next week. For more details on the events and the author see below. Here’s what are others saying about this new publication:

There are few concepts as beautiful (and as radical) as the Jewish idea of a sabbath for the land every seven years. In this utterly fascinating translation, Rav Kook offers a gorgeous and profound hymn from across the decades to the concept, and the able translator provides historical context as well as powerful hope that this great rest and rejuvenation can have practical as well as spiritual meaning in the modern age.”

—Bill McKibben, author of “Deep Economy: The Wealth of Communities and the Durable Future”

Rarely can a one-hundred-year-old pamphlet reach across history and shake a reader’s heart and inspire an activist’s hands. Shabbat Ha’aretz, which was revolutionary in the Land of Israel in its time and is revolutionary for American Jews today, does just that.”

—Rabbi Mishael Zion, author of “A Night to Remember: The Haggadah of Contemporary Voices”

The concept of Shmita, or a sabbatical year, is not just about religion but resonates across the political spectrum. This timely book points at the necessity for periodic return to core questions of economic sustainability, social equity, citizenship, and debt-release.”

This powerful new translation of and commentary on shmita comes at a moment when we are well-advised to look at how we use time, how we are consuming resources, who owns what and what we should be doing to ensure the survival of ourselves, our communities and our planet. It raises key questions, gives us timeless wisdom and forces us to come up with some new answers.”

In connection with the beginning of the upcoming sabbatical year, Hazon is publishing the first-ever English translation of the introduction to a 1909 book on shmita by Rav Kook – the first chief rabbi of the modern Jewish community in then-Palestine. The essay is lyrical and mystical, a meditation on the big themes that underlie a religious environmentalism. The book has been translated by Julian Sinclair, an Anglo-Israeli scholar and rabbi — and Vice President at Energiya Global, a leading Israeli solar company that has just developed the first-ever large-scale solar project in Sub-Saharan East Africa. It is accompanied by Rabbi Sinclair’s own introductions to the traditional conception of the sabbatical cycle; to Rav Kook’s life, mystical thought, and relationship to the modern return to Jewish agriculture; and to the ways Jewish tradition can speak to issues of land use, social justice, and climate-change activism in the twenty-first century.

Introduction to Shabbat offers a Jewish spiritual approach to the moral life of our physical world—and a lens to see our care for creation in terms deeply grounded in Torah and Jewish thought. Rabbi Sinclair, is travelling across the country giving talks about the book. There are two free, public events on the Front Range. Registration is welcome but not required. Copies of Shabbat Ha’aretz will be available for purchase and signing.

“Release, Renewal and Rosh Hashanah: How This Shmita Year Could Be Different from All Others”
Monday, September 8, 7:00 pm at Chabad of NW Metro Denver, Westminster

Hazon is America's largest Jewish environmental organization. We create healthier and more sustainable communities in the Jewish world and beyond. Hazon in Colorado is led by Becky O'Brien, Boulder Director and Sarah Kornhauser, Denver Director.
Previous Remembering the Flood: A Celebration of Our Resilience
Next “Don’t Be Left Out!” This Thursday or Friday Evening