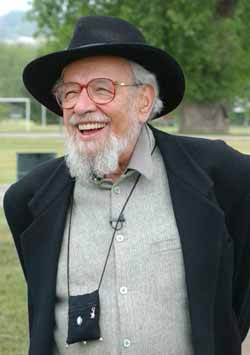 I am honored to be asked to address you in this post-funeral memorial service for the one and only Reb Zalman. Yesterday in the funeral home, someone asked Eve, or Chavele, as Reb Zalman so lovingly called her, ‘Can I get you anything?’ and she answered, ‘Resurrection.’ This Jewish principle of faith mentioned also in the blessings of the Amidah, helps explain a verse in this week’s parsha: ‘Mi mana afar Yaacov.’ ‘Who can count the dust of Jacob?’ (because their population is so numerous). But are the Jewish people really as copious as the dust and the sand? Yes, says the Karliner Rebbe, if we count the lives of all generations that returned to the dust but will be resurrected with the coming of Mashiach.

But how do you say goodbye to someone like Reb Zalman who was always so happy to see you? For me, an orphan with no children, no siblings, the dazzling smile he gave me when I walked into a room, even if it were crowded with other people, literally brought me life. Even in a week so filled with loss, for so many of us here today, this is the loss of the century. In Hebrew, Azav means to leave, as in Elvis Azav et haBinyan-Elvis has left the building. But for me, Azav stands for Olam Bli Zalman-a world without Zalman. I first met him about 50 years ago in a shul in Massachusetts. I looked over the mechitza at an exotic looking rabbi with a rainbow tallit and he looked over at a young woman waving a Lulav and etrog back and forth. In those days, I don’t know what was more radical, but it was ‘love at first sight.’ We corresponded off and on over the course of the years, and I saw him again at a Jewish spiritual retreat called Ruach, held that time in a place called the Abode. Whenever I consulted him, he would give me sage advice ranging from the sublime to the mundane- from ‘read about Saint Teresa’, to ‘Don’t put all your eggs in one basket.’ I won’t share with you what prompted the latter, or as a matter of fact, neither the former, but the advice was solid. Like so many of you here, knowing he lived in Boulder was a major factor in my relocating. When I first came for a visit to check out Boulder, he actually picked me up at the bus station.

Why did Reb Zalman choose to leave yesterday? So many of us were anticipating his 90th birthday, and he was looking forward to the high holidays. What was so special to him about yesterday? We can only speculate. First of all the date, the 5th of Tammuz, happens to fall between the Yahrzeit of the last Lubavitcher rebbe whom Reb Zalman was friends with and who sent him out to inspire others, and 12th and 13th of Tammuz, which is the birthday and liberation of the previous Lubavitcher Rebbe, who was Reb Zalman’s rebbe. As the song goes..’When the Tzaddikim come marchin’ in….’ apparently, Reb Zalman wanted to be ‘among that number.’ I’m sure both the last and the previous Rebbe are ‘farbrenging‘ with him right now.

One pertinent story from the previous rebbe that makes a big impact even on young children when I tell it, is that when the rebbe was daavening in prison, a guard pulled out a gun and said he would shoot the rebbe if he didn’t stop his prayers. The rebbe waved him away insisting that the only people afraid of such toys are those who have many gods and one world, but ‘I who have one G-d and many worlds am not afraid at all.’ Reb Zalman has but one G-d and is now travelling to and through those many worlds.

Back to the significance of the fifth of Tammuz: the day itself is a momentous one in the Jewish calendar: it is the day that the prophet Ezekiel had his remarkable vision of the chariot, by the rivers of Babylon-the only Biblical vision to occur on foreign land. Ezekiel was also the prophet best known for the Haftarah of Pesach, of the vision of the dry bones coming back to life. What more appropriate day could there be for Reb Zalman to leave this physical plane? He was a merkavah; a chariot who took us to heavenly realms that most of us didn’t even know existed, much less experienced. On the other hand, he could reach down, down into the bowels of the earth, retrieve dry bones, and blow into them a fresh, living spirit. He was the caring bridge of our post Holocaust generation mending souls that were torn, alienated, and cut off from the umbilical cord of our ancestors.

The daf yomi, the Talmudic Tractate page of today also happens to be auspicious; it is tractate Taanit, page 23, whose study Rabbi Marc will be G-d willing resuming in August. On that page is a story of Eliyahu- Elijah the prophet, and Rabbi Beroka, meeting two comedians in the street. Eliyahu tells Rabbi Beroka that they are guaranteed a portion in the world to come. The Baal Shem tov explains that the comedians tried to connect with people in their most mundane lives, home, business, etc. but if they were sad or depressed they couldn’t accept the connection so they first had to cheer them up. Sound like anyone we know?

Reb Zalman cared about people along the model of the Lubavitcher Rebbe. In fact, Rabbi Telushkin in one of the three new biographies of the Lubavitcher Rebbe, tells a story that when the Chabad emissary, Avremel Shemtov of Philadelphia came to the Rebbe, the Rebbe asked if he knew Reb Zalman, and Rabbi Shemtov replied that he was a friend. Then the Rebbe asked how Reb Zalman was managing financially, and the response was ‘I don’t know.’ The Rebbe remonstrated; ‘How can you call yourself a friend if you don’t know!’

Another relevant story from that book about Reb Zalman-he wanted to spread his wings, and wanted to go to Mumbai, India. The Rebbe said no. Then a bit later he wanted to start a Chabad center in Wall Street. Again, the Rebbe said no. Finally he protested, ‘You program me then. You call the shots and I’ll jump where you tell me to go.’ The Rebbe replied after due deliberation: ‘If you give over your will you become a robot. G-d does not want that!’

On today, the 4th of July, we celebrate freedom, freedom from what oppresses us but also freedom to be who we need to be. There was no one in Boulder that I disagreed with more on certain issues, and there was no one I loved more. How can that be? Because that’s the Jewish way! The highlight of the year for me was celebrating Thanksgiving with Reb Zalman and Eve and a few friends. And though he was feeling rather weak then, he directed the conversation in a unique way. Knowing that most people there knew each other, he asked each one to say something that they especially valued about every other person there. Needless to say, it was an amazing evening.

My Gan Eden- my paradise- in Boulder was the Thursday nights and Shabbos mornings of learning Hassidut with R. Zalman. It is written in Tanya, the written Torah of Chabad Hassidut -and from which Reb Zalman loved teaching this past half year- that a righteous person lives by his faith, his awe, and by the flashes of fire of the flame of his love (of G-d)…How appropriate an association with July 4th.

In one recent class, he referred to the movie, Her, and especially the line that the man says to his living computer- ‘Are you as intimate with anyone else as with me?’ And the answer came back- ‘multitudes.’ Reb Zalman said that’s the way it is with G-d. And I would like to add, that’s the way it was with Reb Zalman. So many people, men women, and children-here and around the world felt that hug of intimacy from Reb Zalman as if you were his ‘one and only love.’ And each of us was, because his heart was bigger than this whole world, and will continue to embrace us from wherever he is.

He cared specifically about the needs of all the Jewish age groups in Boulder. About children, he was heartbroken when the day school closed down. About adults, he kept urging and supporting more and more Torah study, and pushed very hard for a daily minyan. And of course for seniors, he initiated and opened the door to the process of preparing for the end of life, as in one of his many books, ‘From Age-ing to Sage-ing.’

Yesterday someone posted a Facebook picture of a building that had a sign on the door; RESURRECTION OFFICE, and under it was a mat, that said: WELCOME BACK. Eve, that mat is waiting for you and for all of us, because we want our loved ones back here in the flesh but on an earth that is healed of its ills, and thriving and flourishing with love, life, and happiness that does not have to be pursued, and has an eternal shelf life.

And, Reb Zalman, talking about earth, I personally am so grateful, as is your family and so many others, that there is a place on earth here in Boulder, where we can come to visit and touch your neshama. I think you would want me to ask everyone here that when your time comes, and you may consider other options, to please opt for a final resting place on earth, where your loved ones can visit near the ‘office of resurrection’, where they too will come ready with the mat that says ‘WELCOME BACK.’

Hamakom Yenachem Kulanu B’toch Sh’ar Aveilei Tziyon V’rushalayim- May the Omnipresent console all of us among the other mourners of Zion and Jerusalem.

I have been teaching Torah and Chassidic writings for over forty years to students of all ages and backgrounds, both on the East Coast and the Midwest. I have been a director of several Jewish organizations in Santa Fe and Colorado. My articles and poetry on a wide variety of Jewish topics have been printed in many publications, and also are available online.
Previous Lila Crank Bat Mitzvah
Next Laying Our Rebbe to Rest