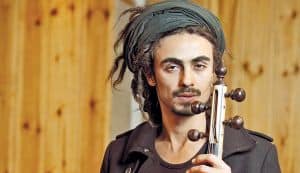 Mark Eliyahu appears on screen as a violin player in “Ballad of the Weeping Spring,” the closing night feature of the Boulder Jewish Film Festival, which screens at the Dairy’s Performance Hall on March 9 at 6:00 pm. The closing night celebration features music by the Denver-based Middle Eastern band, Zuruna, and Middle Eastern food and drinks.

It is not Eliyahu’s performance but his soundtrack that drives this Israeli drama about a group of Mizrahi musicians who disbanded years earlier following a tragic accident. The spirited film follows their attempt to reunite and reconcile. The music perfectly underscores the movie’s emotional story of reconciliation and redemption. A very special musician with a following in Israel, Eliyahu explores the rich and exotic melodies of Mizrahi music – a music genre in Israel that combines elements from Europe, North Africa and the Arab world, particularly Persia, usually sung in Hebrew, literary Hebrew, or Arabic slang. The literal translation of Mizrahi from Hebrew is “Eastern.” Israeli Jews who emigrated from the Arab countries have, over the last 50 years, created this unique musical style that combines elements of Arabic, Turkish, and Greek music.

The music Eliyahi composed for “Ballad of the Weeping Spring” – which won the Israeli Oscar for best movie score last year – reflects his seamless movement between traditional and popular genres, an amalgam that is both very Israeli and completely foreign.

Director Benny Torati  (“Desperado Square”) has chosen another unusual source for this cinematic amalgam, the spaghetti western, a term describing the films of Sergio Leone and other Italian directors who used highly theatrical music for their stylized retellings of the traditional Hollywood movie western. (Think of “The Good, the Bad and the Ugly,” scored by Ennio Morricone.) Paying homage to the spaghetti western is an arresting choice, one that adds to the film’s mythic quality. In an interview last year, Eliyahu recalled encountering the music of Habil Aliyev, famed for playing the kamancheh (a Persian bowed string instrument).

This was the first time I heard this sound, but I felt as though I had always heard it within me, as though it were my own inner voice. I had chills, and I knew definitively that I had to quit the saz, and start playing this new instrument. When I told my father about this, he was very moved. As it turns out, my great grandfather was a kamancheh player in Dagestan.”

Eliyahu immigrated with his parents from Dagestan (located in the North Caucus region of Russia) when he was six years old. Today, Eliyahu has had one foot in traditional music (playing in ensembles with his father) and another foot in Israeli popular music (he has written music for Rita and Idan Raichel).

Although the soundtrack has yet to be released, the popularity of “Ballad of the Weeping Spring” has given a boost to the interest in ethnic music in Israel, and through Jewish film festivals such as ours, given exposure to American audiences as well.

Kathryn has spent her professional life writing about, teaching, and presenting the arts. Founding Director of the Boulder Jewish Film Festival, Kathryn was Director of Menorah and ACE at the Boulder JCC from 2003 through August, 2019. The former film and theater critic for the Boulder Daily Camera, Kathryn is the author of "The Fifty Greatest Jewish Movies" and "The Fifty Funniest Films of All Time." kathryn.bernheimer@gmail.com
Previous Jewish Community Grief Group Begins Spring 2014
Next Jewish Women Through the Ages: An Afternoon Tribute